A frightening new outbreak of viral pneumonia much deadlier than Covid-19 is causing concern for citizens of Kazakhstan. The situation is described as very grim: Meanwhile, an unknown disease has killed 130,000 Saiga antelope. Link? 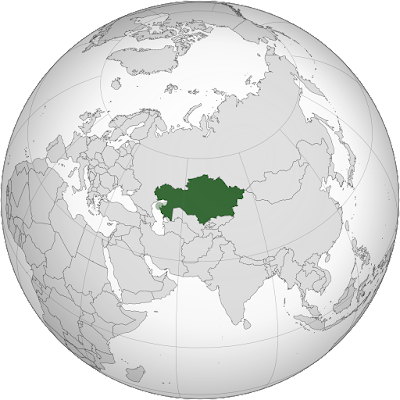 A frightening new outbreak of viral pneumonia much deadlier than Covid-19 is causing concern for citizens of Kazakhstan.  Since the start of the year, 1,772 people have died of pneumonia in the country. In June alone, there were 628 fatalities, including Chinese citizens, a statement on the embassy’s website.

Between Covid-19 and the pneumonia outbreak, the diplomats described the health situation in Kazakhstan as “very grim.”

While the Chinese embassy described the illness as “unknown pneumonia”, Kazakhstani officials and media have only said it is pneumonia. It was not clear why the Chinese embassy had described the illness as “unknown” or what information it had about pneumonia. The embassy’s website, citing local media reports, said the provinces of Atyrau and Aktobe and the city of Shymkent have reported significant spikes in pneumonia cases since the middle of June.

The Chinese embassy in Kazakhstan has warned of a deadly “unknown pneumonia” after the former Soviet republic reported a spike in pneumonia cases since June. “The death rate of this disease is much higher than the novel coronavirus. The country’s health departments are conducting comparative research into the pneumonia virus, but have yet to identify the virus,” the embassy said in a warning to Chinese citizens in the country.

The embassy’s website, citing local media reports, said the provinces of Atyrau and Aktobe and the city of Shymkent have reported significant spikes in pneumonia cases since the middle of June. The Chinese embassy said that so far there have been nearly 500 pneumonia cases in the three places, with over 30 people in a critical condition. The country as a whole saw 1,772 pneumonia deaths in the first part of the year, 628 of which happened in June, including some Chinese nationals, the embassy continued. More here and here.

During May and early June 2020, researchers have discovered more than half of Kazakhstan's herd of Saiga antelope, around 130,000 have died. The extent and speed of the deaths are really unheard of according to veterinarian Steffen Zuther who believes bacteria is to blame for the death of the saigas.

Back in 2015, 200,000 wild saiga antelopes collapsed and died suddenly in Kazakhstan from a bacterial infection, more than two-thirds of the entire global population. TBW

A suspected case of bubonic plague has been registered in China’s north, according to local health authorities and a further two more cases in neighbouring Mongolia.  It’s believed the patient in question is suffering from the bubonic form, which causes swollen lymph nodes, it can kill a person in one day. TBW

I wonder if officials will ever look in to the "why" is sickness so prevalent in our world!? Due to the fact that they do not do this, nor does any healthcare professional (our doctors) or any government health agency ever recommend wellness treatments or solutions from good nutritious foods vitamins or exercise, we will just continue to live with this fear of illness the rest of our lives!

Why is everyone so sick dammit??!!! Why do we wake up each day to learn of yet one more invisible killer virus or bacteria lurking and waiting to infect us and or kill us? When will people demand answers to these basic questions I ask?

Instead people hide inside, walk around like hostage fools in masks that do not offer protection, and allow the entire economy to collapse because they are too afraid of being infected with the media virus blobs shown in pictures every single minute of the day!? This is life? No! This is no life.

Our world is so toxic is why people are so sick. In fact even the damn planet is sick because too big to fail business, private and governmental, never stop poisoning our skies, water, soil, food, bodies, and our minds. Nor do they ever ever admit to it. So, you can continue to be a zombie and hide in your house accepting this entire pandemic crock of shit, or you can wake the hell up and start to demand answers and get educated on how to promote true wellness to your body and the environment. Your choice people. So far you get a big fat F for a grade with regards to this option.
FYI:
Wellness does NOT come in a syringe or a pill or a lab created food plant, those are part of why you are so sick. How in the world are known neuro toxins, which are in every single vaccination and med, considered wellness? Answer that question government! Friggin had it with this BS world of poison and sickness and liars liars liars!

And I will appoint my two witnesses, and they will prophesy for 1,260 days, clothed in sackcloth.”
4 They are “the two olive trees” and the two lampstands, and “they stand before the Lord of the earth.”
5 If anyone tries to harm them, fire comes from their mouths and devours their enemies. This is how anyone who wants to harm them must die.
6 They have power to shut up the heavens so that it will not rain during the time they are prophesying; and they have power to turn the waters into blood and to strike the earth with every kind of plague as often as they want.

Good job Hawkeye. Cudos to you!

Hawkeye, you are a wise individual/woman. You hit the toxic Globalist mail on the head. I encourage folks on a regular basis to educate themselves up, group up, stand up, and show up. Words without actions are hollow. I pray that the good people of the Earth will continue to awaken and unite in an organised, constructive manner to overcome the evil, tyrannical Kabal that funds this upside down shit show we are living through. God Bless You Hawkeye, Gary and others.
In Purpose
Christopher

When you take Jesus Christ and his father "The True God" out of society & discredit him w/ no regard for repentance, which means to think differently about our behavior, no fear of God, you get hate. ask The Holy Spirit of God to give you the light in your heart & soul, wisdom, clarity, love for everyone, be understanding, patient, kind, & tolerant w/ others. God bless us all. Amen. Melly Watchman.

People still cant understand that the time is over. All that is written in bible is going to happen in various part of the globe at the same time. He is making the earth uncomfortable so that we could focus more on heaven, our real home. Before God comes back again to destroy fully the earth and create a new one for His faithful ones to rule with Him.

This link says Khazakstan denies the story, it may be CCP subtle propaganda.
https://www.zerohedge.com/geopolitical/new-pneumonia-much-higher-fatality-rate-covid-discovered-kazakhstan-china-says

Love is the word. Live your life, have fun, talk to friends, have parties, cook, have sex, kiss your wife & kids and tell them you love them. The hate is here, rise above it just like Jesus did. Amen.

terrain theory
not germ theory
virus is something made by the human to help clean up toxins , dead wasted cells , invaders and as such virus es are beneficial
how ever they have a specific function
so
you can identify the REAL pathogen by the virus that is made to combat it

you can never find something if you dont look for it .