What comes out of the ocean reflects it's bio-health! May 2019 delivered a picture of death and decay along the West Coast and Gulf of Mexico, N America 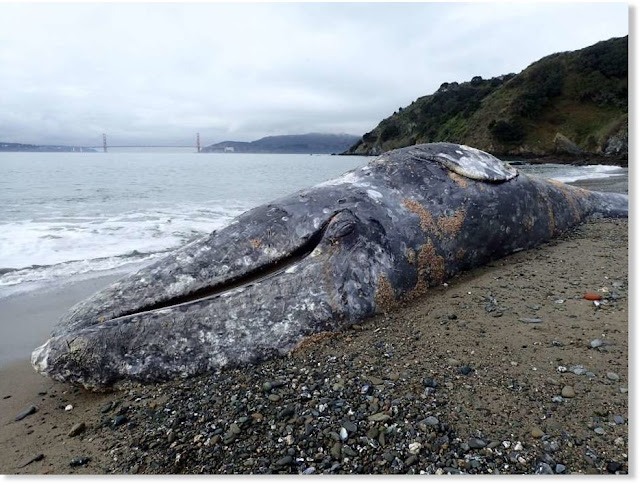 A shark die-off in San Francisco Bay is being blamed on a parasite in the water.
Bay currents are pushing the carcasses ashore at Crown Beach.
So far this year, about 100 leopard sharks have washed up onto beaches around the area, not just in Alameda.
Many more will have died out at sea.
The deaths are blamed on a protozoan parasite that gets into the shark's brain, James C. Frank, Supervising Naturalist for the East Bay Regional Park District told KTVU.
This die-off has been happening annually.
In 2017, thousands of sharks were killed by the parasite. The California Department of Fish and Wildlife is trying to get to the bottom of the problem. More West-Coast misery as more than 2,000 leopard sharks have mysteriously died in the San Francisco Bay area along with other species recently


A fifth grey whale has been found dead on British Columbia's coast in what one research biologist says could be a trend towards of record-setting deaths. John Calambokidis of the Cascadia Research Collective based in Olympia, Wash., said Tuesday that 23 grey whales have been found dead this year in his state, and the dead greys are all found along the same migratory route.
Those deaths bring the total number of carcasses found along the migration route from California to Alaska up to 70, according to figures from the U.S. National Oceanic and Atmospheric Administration, or NOAA. Full Story


Hundreds of Common Murres, an ocean-going bird native to the Pacific Coast from the Channel Islands to the tip of the Aleutians in Alaska, have been reported washed up dead or dying on beaches along a 10-mile stretch of coastline in Mendocino County between Noyo Bay and Seaside Beach.  Sarah Grimes – Contributed Hundreds of dead and dying Common Murres, including those pictured here at MacKerricher State Park May 23, are washing up on Mendocino County beaches with many more dying out at sea.
The Common Murre looks a little like a penguin but is more closely related to terns or gulls.
It spends most of its time in the water. Murres can and do fly, but like penguins, they manoeuvre best in the water. Little seabirds washing up dead along the shores of Alaska by the hundreds of thousands now dying as far south as San Francisco


GALVESTON—The number of sea turtle strandings along the Texas coastline reached the highest number ever recorded in one month during April and May, the height of sea turtle nesting season.
A total of 159 stranded sea turtles were recorded in April—the highest number of strandings in one month since monitoring began in 1980.
Strandings are continuing at a rapid pace, and the latest data shows 186 turtles stranded in Texas through May 21.
Most of the turtles were dead when found.
Among those found were 68 dead Kemp’s ridley sea turtles, the Texas state sea turtle and the world’s most endangered sea turtle with a nesting population of between 7,000 and 9,000 female turtles.
The death of even one of Kemp’s ridley sea turtle is of grave concern. Full Story


Scientists baffled as dead whales continue to wash ashore in parts of Alaska.
Dead whales are washing ashore along the Alaska coast.
A second gray whale was found dead Sunday, making it the third whale found in just a few weeks. Dozens of gray whales washing up dead in recent weeks is another indication the US west coast is dying after millions of species died since 2011


SAN FRANCISCO — At least 53 dead or dying gray whales have washed up on West Coast beaches this spring, a death rate that’s only been seen once before.
The great mammals are starving to death and scientists have theories as to why but so far no full explanation.
The number of deaths is likely much higher because it’s estimated that only 10% of dead whales actually end up on shore, said John Calambokidis, a research biologist with the non-profit Cascadia Research in Olympia, Washington, who studies whale populations on the West Coast.
That could mean as many as 530 whales have died, a large number for a population that is estimated to be just over 20,000 and that only began to rebound in recent decades after being hunted almost to extinction in the late 1800s. Full Story


Washington’s Department of Fish and Wildlife towed a gray whale away from an Everett beach Tuesday evening, so scientists can do a necropsy to find out how it died. It's the 13th dead whale in to wash up on Washington state shores this year.
Related Headlines Dead gray whale washes ashore at a beach in Everett Concerning the number of gray whales wash ashore on Washington beaches
Scientists say the spike in gray whale deaths appears to be tied with malnourishment, but the drastic increase in the number of dead whales has marine biologists stumped.
Along the West Coast, the National Oceanic and Atmospheric Administration say there are now 48 dead whales as of Tuesday that have washed up on shore.
A normal year is just a few whales per state, per year. Full Story