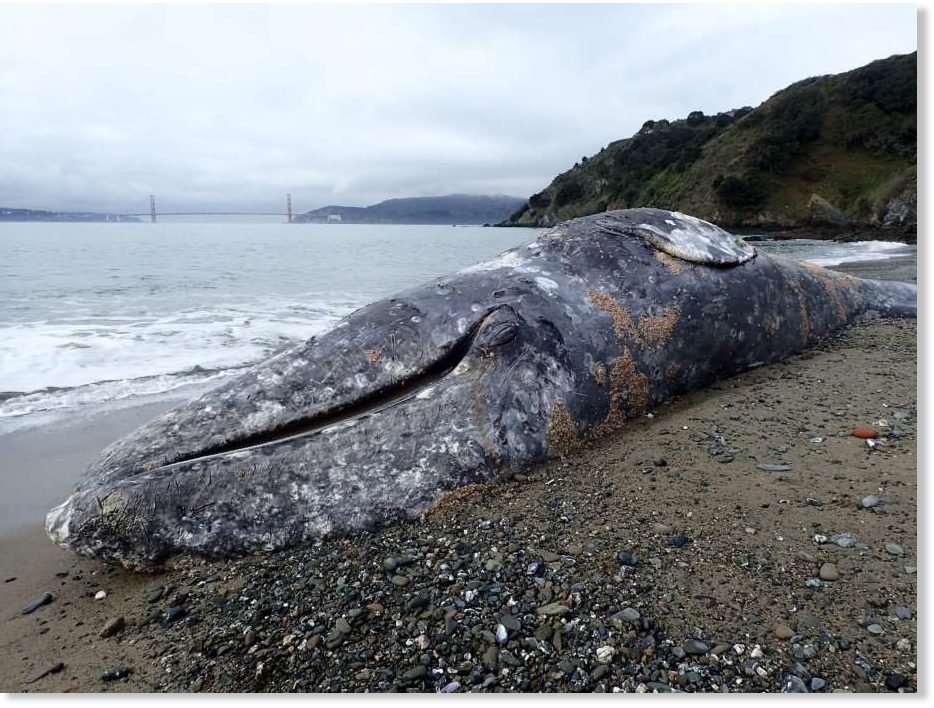 Photo sott.net
More evidence showing the West Coast of America is in trouble as dozens of gray whales have been found dead in recent weeks.
Fifty-eight gray whales have been found stranded and dead so far this year in sites stretching from California to Alaska, according to the National Oceanic and Atmospheric Administration (NOAA).
Dead whales examined so far have been malnourished, and the current hypothesis is the animals failed to eat enough last year in their summering grounds in the Bering and Chukchi seas off Alaska.

Other evidence in recent years has pointed to the decline of marine species along the west coast from Mexico to Alaska.
In June last year, The Big Wobble reported hundreds of thousands of dead seabirds had been washing up along the Alaskan coast for the 4th year in a row

Common murres, an abundant North Pacific seabird, have been dying in unprecedented numbers since 2015.
It is thought millions of the little birds have died since 2015 but the true number will never be known because the majority of birds are thought to die out at sea.
The new die-off follows a massive loss of common murres in 2015, 2016, 2017 and 2018 the biggest murre die-off on record in Alaska and a precursor to near-total reproductive failures for murres in the Gulf of Alaska and Bering. 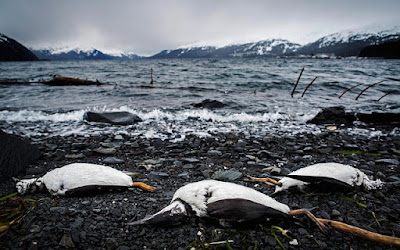 Dead kittiwakes on an Alaskan beach.
It also follows the deaths of thousands of puffins found last fall on St. Paul Island in the Pribilofs and, prior to that, mass deaths of murres and auklets along the U.S. West Coast.
In each death wave, starving birds have left emaciated carcasses, and each wave has been associated with unusually warm marine waters.

However, Alaskan and West coast fishermen have been complaining of the demise of fish along the West coast of the U.S. Canada and Mexico since 2012.
According to Hal Bernton of The Seattle Times, the Gulf of Alaska cod populations appear to have nose-dived, a collapse fishery scientists believe is linked to warm water temperatures known as “the blob” that peaked in 2015.
The 2017 trawl net survey found the lowest numbers of cod on record, more than 70 per cent lower than the survey found two years earlier.
The cod decline likely resulted from the blob, a huge influx of warm Pacific Ocean water that stretched — during its 2015 peak — from the Gulf of Alaska to California’s offshore waters.
Sardines, anchovies, have all but disappeared according to U.S. fishermen along with the demise of the Salmon industry along the West coast of Canada and Alaska.
The Bering event is the latest in an "unprecedented series of marine bird die-offs" over the last four years in waters from California to the Arctic, said Julia Parrish, executive director of the Coastal Observation and Seabird Survey Team, or COASST, managed by the University of Washington."The results come back pretty quickly.
Currently, they determined the cause of death appears to be due to emaciation, starvation," Kaler said. Scientists are examining what led to the birds' starvation and Kaler said there are likely multiple factors at the root of the problem.
"You've got birds that are starving, so we know why they're dying - they're dying of starvation," Kaler said.
"But the question is why are they not able to find food?
What's happening?"

The problem is not confined to cod, all marine life has been declining along the western coast of America, Canada and even Mexico since 2011.
Biologists tracked increases in bird die-offs, whale strandings and other events such as toxic algae blooms.
If hundreds of thousands of birds are dying, it's because there's no fish out there, anywhere, over a very large area!
The deadly patch of warm water along the American West Coast called the ‘Pacific blob’, has also killed thousands of California sea lions.
Many starved as they struggled to find food in an unusually warm eastern Pacific.
Strange exotic tropical fish have been reported off the coast of Alaska.
An unprecedented die off which began in 2011 along the West coast of North America when billions of sea urchins and sea stars died suddenly in what was 'one of the most unusual and dramatic die-offs marine biologists have ever recorded.
In January last year, the U.S. Federal government issued a disaster declaration for Alaska's pink salmon fishery as the true amount of dead marine life began to hurt the fishing industry.
The collapse of Alaska's salmon fishing is not the only problem hitting the North-West Coast of North America in the last couple of years, the amount of marine and bird life dying in the area is astonishing.