Anti-government protests in Iran have entered the third day today after Tehran finally abandoned its pretence and admitted shooting down a passenger jet. Dozens of protesters gathered and chanted slogans at a Tehran university today amid a wave of public anger after the plane came down with dozens of Iranians on board.
A string of celebrities have also turned on the regime and two-state TV hosts have quit over Tehran's three days of false reporting over the crash. Film director Masoud Kimiai has pulled out of Tehran's annual Fajr Film Festival, saying he was 'on the side of the public'.
Volcanoes
Taal Volcano Update No 4: A larger eruption, which is increasingly expected, could conveniently cool the global climate and cause "A Year Without Summer."

Philippine officials said Saturday they're bracing for a long crisis whether the Taal volcano erupts more disastrously or simmers precariously for weeks or months, as massive numbers of displaced villagers languish in emergency shelters. Health Secretary Francisco Duque III said more than 900 villagers who fell ill have been treated, mostly for exposure to volcanic ash, in evacuation sites since the volcano began erupting in Batangas province near Manila, the capital, last weekend. About 125,000 people fled from ash-blanketed villages and crammed into hundreds of emergency centres in Batangas alone and many others took shelter in relatives' homes, disaster-response officials said, appealing for masks, bottled water, portable toilets, food and sleeping mats.
Major quakes
A magnitude 6.0 Earthquake - near the north coast of Papua, Indonesia is the 5th major quake of 2020 (mag 6 or higher) according to USGS

USGS
A magnitude 6.0 Earthquake - near the north coast of Papua, Indonesia is the 5th major quake, (mag 6 or higher) in January 2020, according to USGS. The quake was relatively shallow but there is a low likelihood of casualties and damage.

Overall, the population in this region resides in structures that are vulnerable to earthquake shaking, though resistant structures exist. The predominant vulnerable building types are unreinforced brick with concrete floor and precast concrete frame with wall construction. No tsunami warning was recorded.

Extreme Weather
The insane Atlantic continues its angry broil! Atlantic waves smashed train windows in the UK: 200 flood alerts in place across the UK: Another explosive cyclogenesis over the Northwest Atlantic today

Screengrab Dawlish webcam showing Atlantic waves smashing train windows yesterday.
The insane Atlantic continues its angry broil! Hurricane strength winds on both sides of the Atlantic with worse to come over the weekend.
Shocking moment huge wave smashes train window on Dawlish rail line as dozens of flood alerts are issued across the UK and forecasters warn that temperatures are set to PLUMMET
A second storm smashed the UK yesterday just a day after Storm Brendan battered parts of the country with 78mph (126 km/h) winds in many places, leaving almost 200 flood alerts in place across the UK.
Hurricanes and cyclones
Here come the storms! Tropical Cyclone Blake the 1st cyclone of the Australian season: Expected to reach category 2 strength by Tuesday: System 92S also forming in the Arafura Sea

Tropical Cyclone Blake is the 1st cyclone of the Australian season and is expected to reach category 2 strength by Tuesday. Blake is located 121 nautical miles north of Broom on the northwestern coast of Australia and is moving slowly southeastwards. Flood watches are in place with 250 mm rain expected in some parts. Destructive gale-force winds are expected later today. According to the latest update from BOM Tropical Cyclone Blake continues to develop to the north of Broome and is likely to track close to the Dampier Peninsula. Gales and heavy rain likely over the northwest Kimberley coast.
Spaceweather
Sea and Surface Temperatures, Major Earthquakes, Volcano Eruptions, Droughts, Extreme Temperatures, Famine, Flooding, Wildfires and Cyclones caused by the Sun and will continue increasing 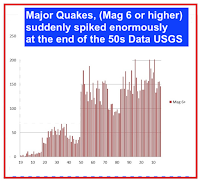 What is really causing climate change? Our climate is changing, no two ways about it, it's getting hotter but the paradox is, it's getting colder too and wetter, and dryer, however, the constant is, it's become more extreme. We are warned our use of CO2 is causing Global Warming, our use of Greenhouse gases is not sustainable and carbon dioxide is killing the planet but is that the case?Something happened on the 24th and 25th of December 1957 which defies logic, defies physics. The story begins with a report from SAO/NASA data system (ADS). Thomas Cragg wrote: During 1957, observations of the Sun were made at Mount Wilson Observatory in Washington on 310 days of that year. Not since 1941 have solar observations been possible on as few days in one year as in 1957.
Manmade disasters
What A Jolly Good Idea! TEPCO, the owners of the stricken Fukushima nuclear plant to release 1 million tons of radioactive water gradually into the air instead of dumping it into the Pacific 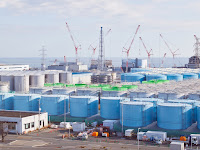 In a new twist, the Japanese government have come up with a new proposal which will enable TEPCO, the owners of the stricken nuclear plant to release 1 million tons of radioactive water gradually into the air. The original plan was to dump it into the Pacific, Tepco has always maintained the "treated" water is perfectly safe, even though the water is still radioactive.
Next summer's 2020 Olympic Games is allowing the Japanese government to focus on the games while their unsuccessful attempt to clean-up the ongoing spread of leaking radioactivity from Fukushima approaches its first 10 years since the disaster.
According to Arnie Gundersen of the Fairwinds website, the government of Japan claims that the Fukushima site will be entirely cleaned and decommissioned in less than forty years...
Climate Change
Alaska the largest mass die-off of seabirds in recorded history: Millions have died since 2015: 2019 fish crisis: Pacific Cod, Salmon, crab, herring, sardines, all gone! Will New Zealand be next?

Record-breaking warm
2019 was a record-breaking year for Alaska in many ways but mostly bad. Monday, December the 9th was the warmest December day ever recorded in Alaska. Alaska's low on December the 9th was warmer than the average high for the time of the year, Anchorage recorded a high of 51 deg F, (10.5 deg C), on Monday the 9th which is more than double the December average.
In 2019, Alaska broke heat records in the Spring, the Summer, Autumn and Winter, Parts of Alaska recorded their warmest February and March on record with temperatures +40 deg F above normal.
Disease
African Swine Fever and Bird flu: Avian Flu, New Europe outbreak feared: 200,000 birds dead or culled in the first 2 weeks of 2020: African swine fever have been confirmed in nine EU countries

The H5N8 strain of bird flu has been found at a large turkey farm in northwestern Hungary, the National Food Chain Safety Authority (NEBIH) said on the 13th of January. Slovakia, Hungary’s northern European Union neighbour, reported its first outbreak of the same highly pathogenic strain of the virus in nearly three years in backyard poultry in the western part of the country. Hungary’s NEBIH said the full turkey stock at the farm, more than 50,000 birds, would have to be culled and other precautionary measures implemented to contain the spread of the infection.
Bird flu detected in eastern Hungary, 115,000 ducks destroyed, January 15, 2020, Hungarian food safety authority NÉBIH said it detected avian flu virus at a duck farm in Hajdú-Bihar County (about 215 km east of Budapest), marking the second major discovery of the H5N8 strain of the virus in the country in the last few days, state news wire MTI reports.
Animal Die-Offs
Pig Crisis: African swine fever escalating in Europe: Bulgaria plans to slaughter 24,500 pigs after 140,000 pigs were culled there last year: Hundreds of millions culled in Asia 2019

A report in November 2019 revealed there is not enough pork in the world’ to deal with China’s demand for meat. Hundreds of millions of pigs, 40% of the total have died or have been culled from swine fever, and the prices are soaring. A report by the Guardian claimed, since August 2018, when China notified the World Organisation for Animal Health that ASF (swine fever) was in the country, the disease has spread with extraordinary speed. Some 40% of Chinese pigs – hundreds of millions of animals – have now been lost, and the result has been a chronic shortage of pork and rocketing prices.
Environment
Just 1 swarm measured 60 kilometres (37 miles) long by 40 kilometres (25 miles) wide: The most serious outbreak of desert locusts in 25 years is spreading across East Africa

The most serious outbreak of desert locusts in 25 years is spreading across East Africa and posing an unprecedented threat to food security in some of the world's most vulnerable countries, authorities say. Unusual climate conditions are partly to blame. The locust swarms hang like shimmering dark clouds on the horizon in some places. Roughly the length of a finger, the insects fly together by the millions and are devouring crops and forcing people in some areas to bodily wade through them.
Near the Kenyan town of Isiolo on Thursday, one young camel herder swung a stick at them, with little effect. Others tried to shout them away. An "extremely dangerous increase" in locust swarm activity has been reported in Kenya, the East African regional body reported this week.
Wildfires
Aussie Bushfire Update No 24: "This will be all of our Christmas, birthday, engagement, anniversary, wedding and graduation presents rolled into one." Significant rain has arrived 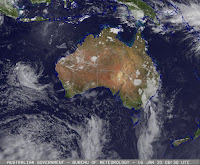 Rain fell across parts of bushfire-ravaged eastern Australia on Thursday and more wet weather was forecast, giving some relief following months of catastrophic blazes fuelled by climate change. The fires, unprecedented for Australia in terms of duration and intensity, have claimed 28 lives and killed an estimated billion animals. Sustained hot weather and only very rare periods of light rain in the affected areas have deepened the crisis. So authorities had been looking forward to this week's rain hoping it would help contain or even extinguish some fires.
In the state of New South Wales, where many of the worst fires have burnt, there were "good falls" on some blazes early Thursday, the local meteorology bureau reported. "Relief is here for a number of firefighters working across NSW," the state's Rural Fire Service said in a social media post accompanying video footage of rain falling in a burning forest.
Photo of the day
Photo of the day: Saudi Arabia and Oman to India and Singapore were treated to a rare "ring of fire" solar eclipse on December the 26th: Remarkable photos

Credit, Elias Chasiotis
Skywatchers from Saudi Arabia and Oman to India and Singapore were treated to a rare "ring of fire" solar eclipse on December the 26th. Annular eclipses occur when the Moon is not close enough to the Earth to completely obscure the Sun, leaving a thin ring of the solar disc visible.
Elias Chasiotis who took these remarkable photos has allowed The Big Wobble to post his work.