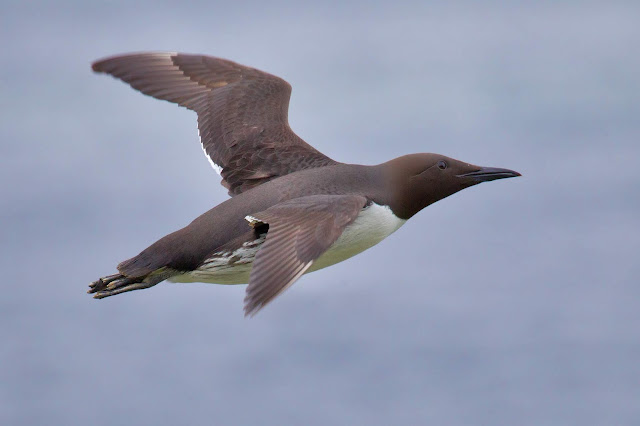 Photo bayocean.ne/ Common Murre
Scientists estimate that thousands of dead seabirds are washing up along the coasts of western Alaska for the last three years.
Common murres, an abundant North Pacific seabird, have been found dead on shores from Shishmaref to St. Lawrence Island.
It is thought millions of the little birds have died since 2015 but the true number will never be known because the majority of birds are thought to die out at sea.
A new report now claims that the dying seabirds are now turning up as far south as San Francisco...
More than 2,500 starving and injured seabirds have been rescued in Northern California just since the beginning of this year.
It's a mystery why there are suddenly so many of them.
Some are being treated here in the Bay Area.
The birds are common murres; many are orphaned chicks, found abandoned on beaches from Monterey to Mendocino.
"[They are] relatively okay, except that they're not well fed," said JD Bergeron, Executive Director of Fairfield-based International Bird Rescue.
"They're starving, anemic and without the adults."
Nearly 100 common murres are at the rescue center.
Every single one of them is examined.
The staff looks for broken bones, other injuries and if they are sick or just need food.
Isabel Luevano, who runs the clinic, said she has additional volunteers to help with the large number of birds needing care.
"Our goal is to get them healthy, strong and get them to an age where they can take care of themselves in the wild," said Luevano.
"That could take weeks, even months.
Caring for an unexpected large number of birds is expensive."
"We would love if folks would go to our funding page, which is givinggrid.com/emurregency."
Once it determined that the murres are not injured, volunteers use a rubber hose to squirt a fish paste directly into their stomachs.
Then the birds are released in small batches into holding tanks to be ensure they recover, and eventually are moved to larger tanks until ready to release.
International Bird Rescue says it can sustain this level of care for the unusual situation only for so long.
The center is actively seeking additional donations.