Just like the weather! Earth's north magnetic pole is shifting so rapidly and in an unpredictable manner at 50 kilometres (30 miles) a year 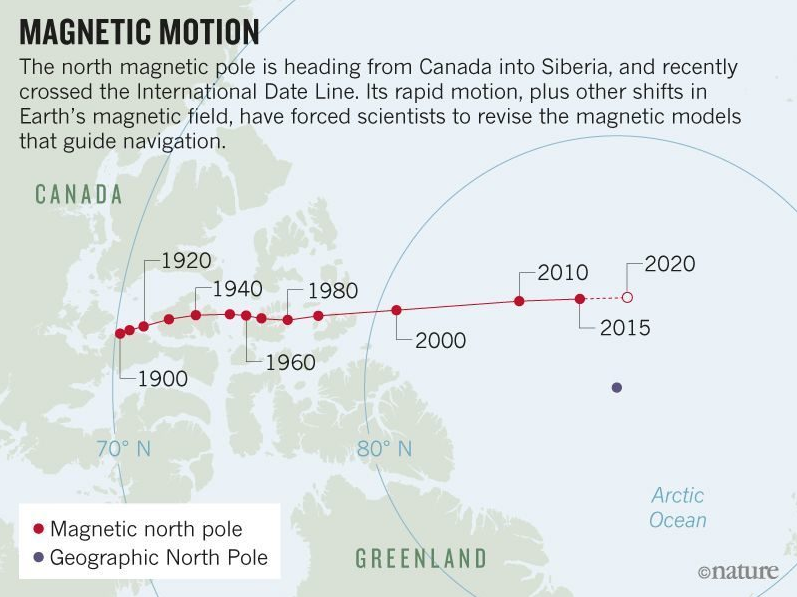 Map credit. Nature
The Earth's north magnetic pole is shifting so rapidly that steps are being taken to ensure it doesn't impact navigation in the Arctic.
Compass needles point towards the north magnetic pole, a point that has moved from Canada to the middle of the Arctic Ocean over the last century.
It is currently moving towards Siberia at about 50 kilometres (30 miles) a year.
The World Magnetic Model predicts the Earth's geomagnetic field for the next five years, and it is normally produced every five years.
Scientists have now recognized that the 2015 World Magnetic Model needs updating earlier than planned, but the update has been postponed from January 15 to January 30 due to the ongoing U.S. government shutdown.
Since late 2014, the core field has varied in a currently unpredictable manner.
This led to the World Magnetic Model becoming less accurate, particularly at high northern latitudes, much faster than normal.
The variations have been attributed to an abrupt unpredictable change in 2014/2015 and an acceleration of flow in the core in the northern hemisphere.
The Model is produced by the British Geological Survey and NOAA, on behalf of the U.K. Defence Geographic Centre and the U.S. National Geospatial-Intelligence Agency.
It is a model of the primary component of the geomagnetic field: the Earth's core.
The core field is generated by dynamic action in the swirling iron-rich fluid of the outer core, roughly 3,500 kilometres below the Earth's surface.
The ever-changing flow of the outer core leads to an ever-changing magnetic field.
"The magnetic poles drift, the field strengthens and weakens, and the immense magnetic field of the Sun, carried by the solar wind, constantly batters at it from the outside," says British Geological Survey blogger, Will Brown.
"The World Magnetic Model is the standard magnetic model used for navigation by organizations such as NATO, the Ministry of Defence, and the U.S.' Department of Defense, and also by smartphone operating systems such as Android and iOS.
When you open your smartphone's map app, you may see an arrow pointing which way you're facing, and there's something quite clever going on underneath.
Your phone contains a magnetometer that is measuring the Earth's magnetic field.
In order to make sense of this information, a reference model like the World Magnetic Model is needed to correct the measurements of magnetic north made by your phone to True North."
The next scheduled update to the World Magnetic Model is expected in December 2019.