New terror for Israel: "We're in a state of war!" Tens of thousands of people evacuated from their burning homes 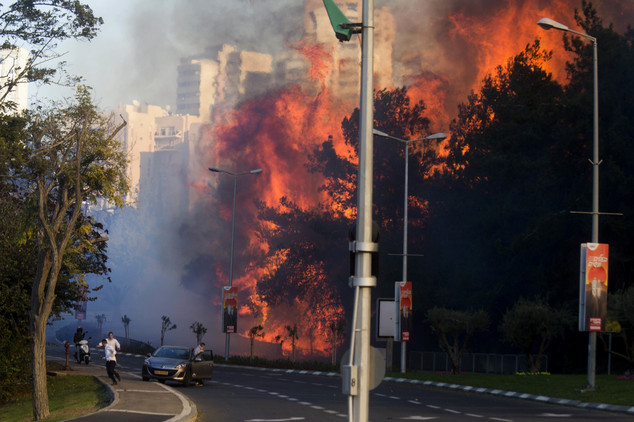 Photo Daily Mail
Tens of thousands of people were evacuating from their homes in Haifa Thursday morning as a wave of wildfires threatened the bay metropolis, bolstered by high winds and dry conditions that have contributed to a spate of blazes across the country over the past two days.
Residents of a total of 11 neighborhoods in the city were told to leave their homes, as fires in at least five locations consumed homes and business.
"The fire is not under control; residents should quickly evacuate," the Haifa fire chief said, according to Walla News, as eyewitnesses described firefighters having little success in checking the onslaught of the flames. 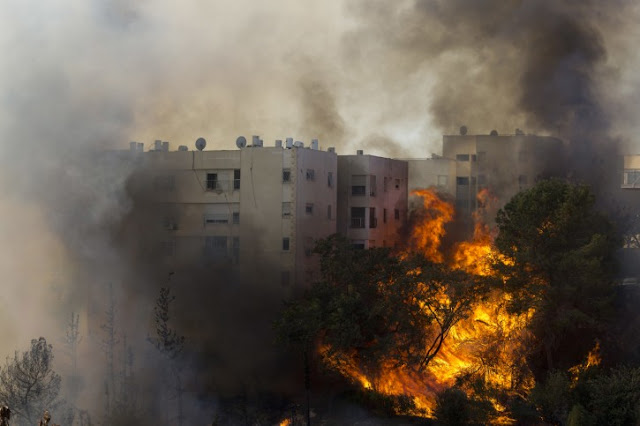 Firefighting planes from several countries were being brought in and the army's Home Front Command called in soldiers and rescuers to aid with the effort.
In the city's Romema neighborhood, a large apartment tower was seen going up in flames.
Houses and a kindergarten in Haifa's Ramot Sapir neighborhood were evacuated, police said, as the city's entire fire service tried to control a blaze threatening to spread from the surrounding forests into the suburb.
Israeli TV broadcast pictures of paramedics frantically moving elderly people out of a nursing home in the Romema neighborhood of Haifa as black smoke billowed overhead.
Firefighters also worked to try and keep flames from nearing a gas station close to the city's Paz bridge.
Route 22 running through the area was closed.
The Magen David Adom rescue service said 36 people had been treated for injuries; 35 were lightly hurt and one hospitalized in moderate conditions. 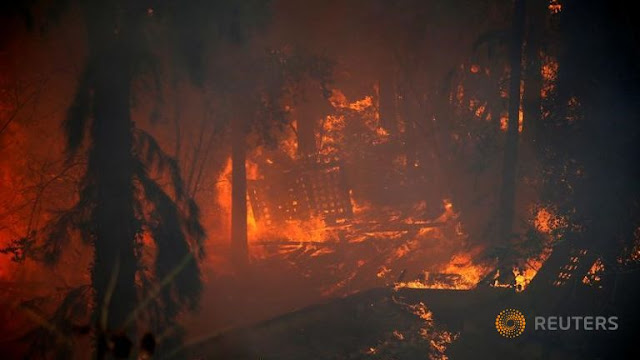 "Every fire that was caused by arson, or incitement to arson, is terrorism by all accounts.
And we will treat it as such," Prime Minister Benjamin Netanyahu told reporters gathered in Haifa. "Whoever tries to burn parts of Israel will be punished for it severely."
Internal Security Minister Gilad Erdan referred to "arson terrorism" and said there had been a small number of arrests, providing no other details.
On social media, some Arabs and Palestinians celebrated the fires and the hashtag #Israelisburning was trending on Twitter.
"We're in a state of war," Haifa fire service spokesman Uri Chibutro told Channel 2 news.
Major traffic jams were reported as residents in affected neighborhoods attempted to move to safer ground.
An Israel fire service spokesman told The Times of Israel arson was suspected in Haifa based on circumstantial evidence, but nothing had been confirmed.
Firefighters have been struggling since Tuesday to keep pace with a spate of brush fires that have popped up around the country, several of which have damaged homes and put people in the hospital for smoke inhalation.


Home page
Related
What Clinton, Trump and the Main stream Media are not telling us about The United States Of America
Leaked Army video shows 'near' future of urban hellscapes
Tension building: Iran bullying US in the Persion Gulf N Korea claim sanctions laughable and Al-Shabaab terorrists flood Mexican border
Tension building: S.Korea unveils plan to remove N. Korean capital Pyongyang from the map with tactical nuclear weapons
Tension building! North Korea claims it's fifth nuclear test while students are being taught “doom” and end of the world in schools
UN Supplying migrants with a document on how to break the law in Europe which led to 21 being attacked on a train in Germany and the death of a young Swedish nurse
Tension building: Czechs and Hungarians call for European army: Germany wants compulsory national service: US backed Turkey invades Russian backed Syria
The Battle of Gog and Magog? Russia Iran and Turkey come together North Korea prepares for the "end" and German's are told to stock up for disaster!
Posted by Gary Walton at 8:58 am

ITS going to get a lot worse,NIBIRU is coming,and when it gets here there'll be more dead then alive in the streets..and the RED IRON OXIDE will be so thick on the ground it will poison everything ,water,food,and the animals will be starving so bad,YOU PEOPLE will be their next meal..

This is God's judegment on the criminal, sadistic false "Israel" for how they have genocided the Palestinians. Their own SIN is burning them to the ground!!!

You were in a state of war as soon as you decided not to defeat them. Only let them go.

"...and they shall call them, the people against whom the the Lord hath indignation forever.
https://www.biblegateway.com/passage/?search=Malachi+1:4&version=KJV