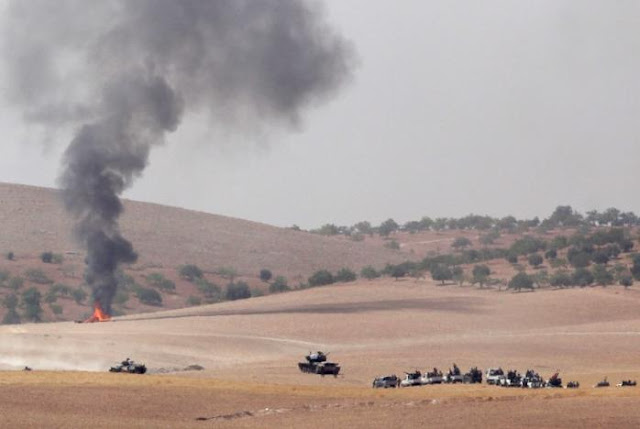 Turkish army tanks and Turkish-backed Syrian fighters make their way in the Syrian border town of Jarablus as it is pictured from the Turkish town of Karkamis, in the southeastern Gaziantep province, Turkey, August 24, 2016. REUTERS/Stringer

Turkish tanks have crossed the border into Syria to clear town of Islamic State militants, military sources say - Reuters
Turkish special forces, tanks and jets backed by planes from the U.S.-led coalition launched their first co-ordinated offensive into Syria on Wednesday to try to drive Islamic State from the border and prevent further gains by Kurdish militia fighters.
Turkish tank units and Syrian rebels backed by the NATO member crossed into northern Syria to push Islamic State out of the border town of Jarablus, military sources said
Syrian Foreign Ministry condemns crossing of Turkish tanks into Syria as a breach of sovereignty, state TV reports
Turkey will take matters into its own hands if required to maintain Syrian territory unity, President Erdogan say's Syrian activist group:
Syrian rebel fighters cross into IS-held town from Turkey as part of Turkish-backed operation - AP Yesterday Turkey bombarded both ISIS and Kurdish fighters, who incidentally are fighting ISIS in Syria

World media trying to hide fact German killer was from a Muslim background
"Allahu Akbar" strikes again: Afghan refugee hacks 15 people with a knife and an axe in Germany
Mad dogs and English men: One month of madness in a world of hate
Breaking news....Turkish military, in statement, says it has taken over the country
Terror Attack In Nice: 83 people and 1 demonic dog killed during Bastille Day celebrations
at August 24, 2016