Record-busting 2020 Continues: Fires, Heat, and now Hurricanes: The northeastern Atlantic Ocean made the 2020 season the most active on record with Subtropical Storm Theta becoming the 29th named storm and storm number 30 already forming

Subtropical Storm Theta, credit NOAA
With less than a month remaining in the Atlantic hurricane season, the formation of Subtropical Storm Theta on November 10 over the northeastern Atlantic Ocean made the 2020 season the most active on record. Theta — the 29th named storm of the Atlantic season — breaks the record for the highest number of tropical/subtropical storms in a single year. The previous record of 28 storms was set in 2005. Official records date to 1851.
The Atlantic hurricane season, in a nutshell.
The 2020 season began early when Arthur formed on May 16. The extremely active season quickly went through the pre-determined list of 21 names, ending with Wilfred on September 18. Then for only the second time in history, the Greek alphabet was used for the remainder of the season, with Alpha forming the same day. 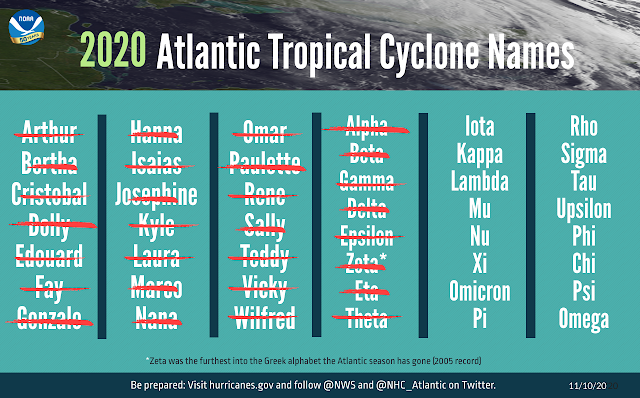 The list of named storms that have occurred during the Atlantic hurricane season as of November 9, 2020. With the formation of Theta, the 2020 Atlantic season has surpassed 2005 as the busiest on record with 29 named storms so far. The season ends November 30.
The Atlantic hurricane season officially ends on November 30, but additional storms could develop beyond that date. Forecasters at NOAA’s National Hurricane Center continuously monitor the tropics for storm development and activity. Weather Service forecasters at NOAA's Climate Prediction Center issued an outlook in May for an above-average hurricane season and later upgraded that outlook to a rare, extremely-active season in August, ahead of the season's peak in the fall.
Meanwhile, the 30th named storm could be forming. A new tropical wave located over the eastern Caribbean Sea is producing a large area of disorganized showers and thunderstorms. The wave is expected to move slowly westward into more conducive environmental conditions over the next several days and a tropical depression is likely to form late this week or this weekend when the wave reaches the central or western Caribbean Sea. Regardless of development, this system is expected to bring heavy rainfall along with possible flash flooding to the Virgin Islands, Puerto Rico, and portions of Hispaniola over the next couple of days. Formation chance through 5 days...high...80 per cent.