While the eyes of the world are on Covid-19, East Africa, the Arabian Peninsula, Southwest Asia and Pakistan continues to struggle with another crisis of biblical proportions: Growing mega-swarms of ravenous locusts. 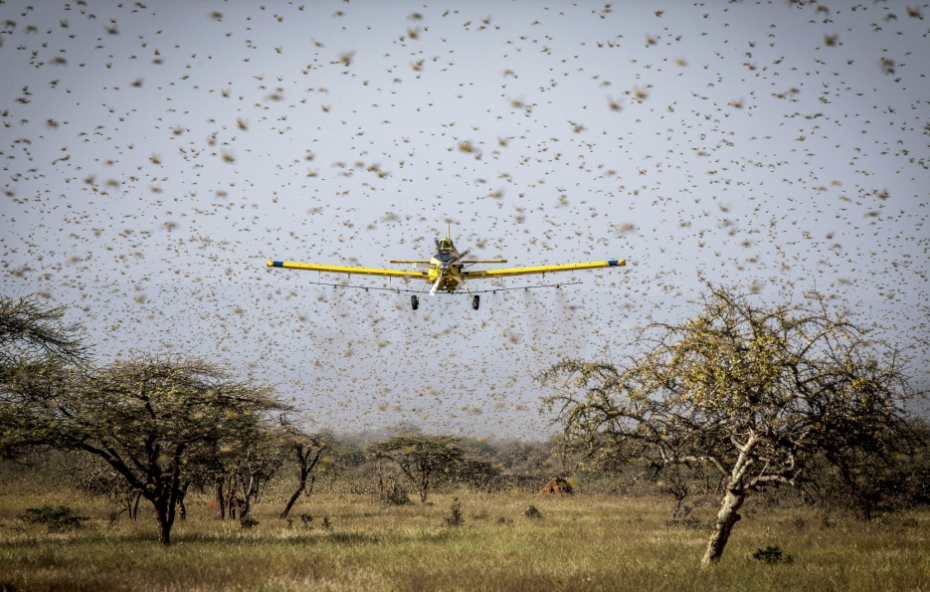 While the eyes of the world are on the novel coronavirus, East Africa, the Arabian Peninsula, Southwest Asia and Pakistan continues to struggle with another crisis of biblical proportions: growing swarms of ravenous locusts. Both crises are extraordinary in scale, and both foes multiply so quickly that governments are struggling to contain them. Torrential rain is causing a dramatic increase in locust numbers in East Africa, Pakistan, Afghanistan, Iran and Yemen.

Swarms have matured in East Africa after widespread rains that fell in late March are expected to cause a dramatic increase in locust numbers in the coming months.

EAST AFRICA The current situation in East Africa remains extremely alarming as more swarms form and mature in northern and central Kenya, southern Ethiopia and probably in Somalia. This represents an unprecedented threat to food security and livelihoods because it coincides with the beginning of the long rains and the planting season. Although ground and aerial control operations are in progress, widespread rains that fell in late March and early April will allow the new swarms to mostly stay in place, mature and lay eggs while a few swarms could move from Kenya to Uganda, South Sudan and Ethiopia. During May, the eggs will hatch into hopper bands that will form new swarms in late June and July, which coincides with the start of the harvest.

● KENYA. More swarms are maturing and increasing in size in central and northern areas with some moving westwards; egg-laying is imminent.

● ETHIOPIA. Hopper bands and an increasing number of swarms are maturing in the south (SNNPR, Oromia); new swarms appeared in northern and southern Somali region.

● SOUTH SUDAN. A maturing swarm arrived in Magwi County on 8 April from Uganda.

ARABIAN PENINSULA The situation in Yemen continues and is likely to be deteriorating but no new information has been received and torrential rainfall is favouring the swarms.

● SAUDI ARABIA. Control continues against early and mid-instar bands near the Persian Gulf.

SOUTHWEST ASIA Spring breeding is underway. The situation in Iran continues to be serious and worrisome.

● IRAN. An increasing number of hopper bands continue to form along with the southern coast; a few swarms near Jask. 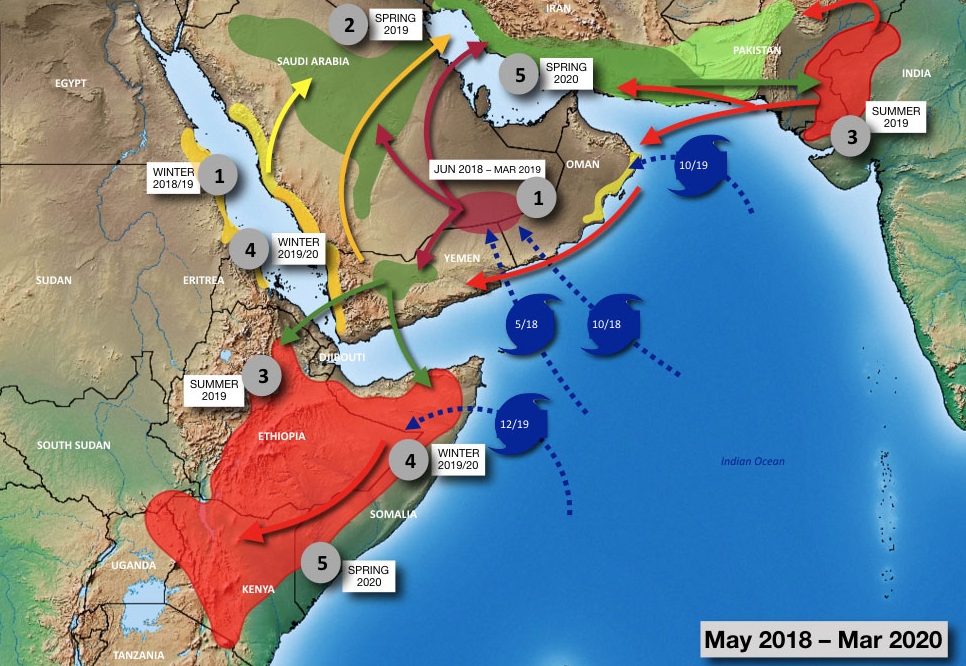 ● Cyclones in May and October brought heavy rains that gave rise to favourable breeding conditions in the Empty Quarter of the southern Arabian Peninsula for at least nine months since June 2018.

● As a result, three generations of breeding occurred that was undetected and not controlled.

● JUNE-DECEMBER: swarms invade the Indo-Pakistan border from Iran and up to three generations occur due to longer than normal monsoon, giving rise to large numbers of swarms; In Yemen, swarms form and move to N Somalia and Ethiopia where breeding occurs and more swarms form.

● JANUARY: Swarms continue to invade, spread, mature and lay eggs in Ethiopia and Kenya. Hatching occurs in NE Somalia. Other swarms move into the interior of Yemen and Saudi Arabia.

● FEBRUARY: Swarms continue in Kenya, a few reach Uganda and South Sudan, groups reach Tanzania. Widespread hatching and bands in Kenya. Other swarms reach both sides of the Persian Gulf.

You start off the article with an unproven point as if it is fact! Your claim that climate change(man made global warming) is the cause of the locusts outbreaks. Utter nonsense!

Climate change, climate change--how I hate those words! It's solar system change, universe change! The entire solar system is moving into a new neighborhood. The poles are shifting, there is incoming debris and a lot more. And mankind can't do a d*mn thing about it.

Is the climate changing? YES! And so is everything else. These fools in the Climate, cow fart game will be swept away with the rest.

One must distinguish between local and/or regional alterations, for example changes to the jet stream patterns over North America in winter, and the much broader rubric of ‘climate change ‘ which is an over used shorthand term used to allege cause when cause is unclear.

Back in Moses time there non known climate change and was worst, come on! do not insult our intelligence.

Why oh why are you all against climate change when it is happening right under your nose, the climate is changing, warming, worldwide, I don't know why its happening no one does, except Hawkeye but it is, pleaaaaase show me a good argument as to why the world is not warming.

Time to start collecting these creatures to make nutritious food

WTF is going on?

I’m sorry but to understand what happening in the world today is simple. Read: ““When there is famine in the land, pestilence or blight or mildew, locusts or grasshoppers; when their enemies besiege them in the land of their cities; whatever plague or whatever sickness there is;”
‭‭II Chronicles‬ ‭6:28‬ ‭NKJV‬‬
https://www.bible.com/114/2ch.6.28.nkjv

Against irrational terrorism about the changes nature. There have been demonstrated severe changes since the earth first cooled and there is not enough money in the universe to change that. Clean air and water is a separate issue that we CAN work on.

The climate change you have been told is happening is not what is happening. Climate change happens as part of the cycle of the planet. Eg, Egypt wasn't always a desert. WE as human beings have just helped to speed up the process.

Its entirely possible that what we are experiencing now is what Jesus called - the beginning of sorrows.

Since 5G makes birds drop dead from the sky, wouldn't it worth trying it on those swarms of locusts? Just a thought.

They are not tasty. The desert locust is unpalatable to animals that normally eat grasshoppers. No thanks.


I'm reposting the following again because it seems to have been '5G censured'...

'Since 5G makes birds drop dead from the sky, why not using it on those swarms of locust? Just a thought'.


Gary Walton, I meant being censured because of what I wrote the day before about 5G being dangerous.

Psycd: I agree. I think the disconnect here as elsewhere with the words: "climate change" is because of politicization. Fair-thinking minds automatically understand the basic words, meaning that the climate is changing, without describing a cause. It is the description of an effect, not a cause.


"Climate change" in the minds of the "simple-minded projecting" blamers becomes a "cause", meaning: "The globalists are trying to use the false narrative of "climate change" to take over the world with the lie that humans are primarily responsible for global warming." We must fight this!


This may or may not be true. It probably is not true unless you are a conspiracy theorist that dreams up God-like powers for his adversaries in order to complete his delusion, but it is not the definition of "climate change".


Foxcult thinks "climate change" itself is a farce because they confuse these perceptions.


Also, kudos to Earl 3! Beautiful reference. I looked it up and remembered its plain good advice. Thanks!