Solar Cycle 25 Begins. New Sunspot Numbered "AR2758," with switched polarities is confirmation after 2019 was the quietest sunspot activity in years with a total of 281 days spotless at (77%) 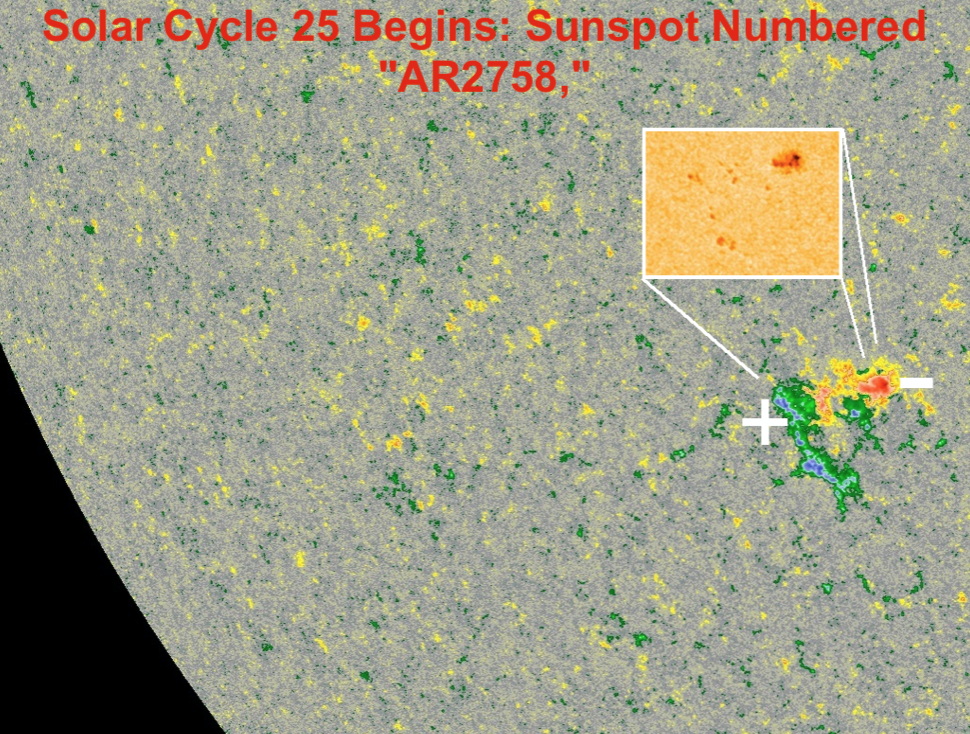 An exciting event on our star is developing suggesting Solar Cycle 25 is about to begin. A small sunspot is emerging in the sun's southern hemisphere, and it looks like a member of the new Solar Cycle 25. Numbered "AR2758," the sunspot is inset in this magnetic map of the sun's surface from NASA's Solar Dynamics Observatory. Last year Solar Cycle 24 reached its solar minimum. In 2019 a total of 281 days (77% of the year) recorded zero sunspot activity, the quietest in years, so far this year, 50 days (72%) has been without sunspot activity.

According to Spaceweather.com, they know this sunspot belongs to Solar Cycle 25? Its magnetic polarity tells us so. Southern sunspots from old Solar Cycle 24 have a -/+ polarity. This sunspot is the opposite: +/-. According to Hale’s Law, sunspots switch polarities from one solar cycle to the next. AR2744 is, therefore, a member of Solar Cycle 25. AR2758 continues a trend of increasing Solar Cycle 25 activity. So far this year, there have been 4 numbered sunspots (including AR2758). Three of them (75%) have been from Solar Cycle 25. This compares to only 17% in 2019 and 0% in 2018. Solar Cycle 25 is still weak, but it is coming.