Pig Crisis: 30,000 pigs dead in a hog-cholera epidemic that has struck Indonesia and is spreading fast: Hundreds of millions of pigs dead in China and Vietnam this year from disease 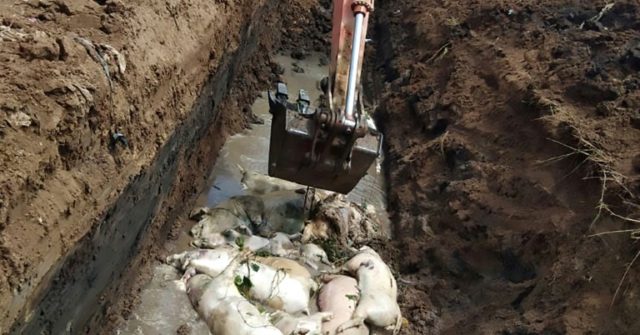 Almost 30,000 pigs have died in a hog-cholera epidemic that has struck Indonesia, with thousands more at risk, an animal welfare official said. Thousands of pigs have died in more than a dozen regencies across North Sumatra over the past three months, and the pace of deaths is increasing, authorities said."Every day, between 1,000 and 2,000 pigs are dying. It's quite a high figure," said Agustina, the veterinary office chief in Medan who goes by one name, on Friday. Still, he added that the current death toll was a small fraction of the 1.2 million hogs in North Sumatra, a part of Muslim-majority Indonesia that is predominantly Christian and where pork is an important part of local fare. Last month, more than 1,000 cholera-stricken pigs were buried in the province after their decaying carcasses were plucked from local waterways, as police searched for suspects who discarded them. Previously, lab tests found that the animals died of hog cholera but officials said they are also testing to see if any were infected with African swine fever. Neither are believed to pose a risk to humans. In 2017, a hog cholera outbreak in Indonesia's East Nusa Tenggara province killed more than 10,000 pigs, causing severe financial losses for local farmers.