As we come toward the end of 2019 a very powerful, shallow, magnitude 6.9, struck near the Philippines city of Davao: The quake is 136th major quake of 2019 so far. 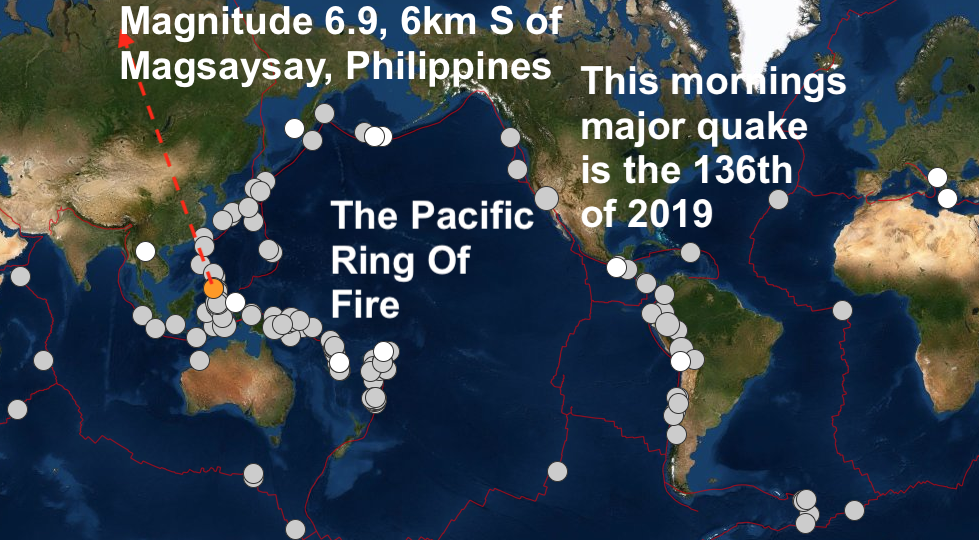 A very powerful, shallow, magnitude 6.9, struck, 6km S of Magsaysay, Philippines this morning, according to The Philippine Institute of Seismicity. USGS reported the major quake as a magnitude 6.9. No tsunami warning, advisory, watch, or threat has been issued.

According to Reuters, the powerful earthquake struck near the Philippines city of Davao on Sunday, the U.S. Geological Survey said, the latest tremor to strike the southern part of the country in recent months, but there was no threat of a tsunami. The magnitude 6.8 quake was centred 61 km (38 miles) southwest of Davao on the island of Mindanao, at a depth of 28.2 km, the USGS said, revising down the magnitude from an earlier 6.9. The Pacific Tsunami Warning Center said there was no tsunami threat from the quake, based on available data. There were no immediate reports of damage, but quakes of such magnitude can damage buildings.

This mornings quake is the 5th major quake, (mag 6 or higher) this December and the 136th major quake of 2019 so far.