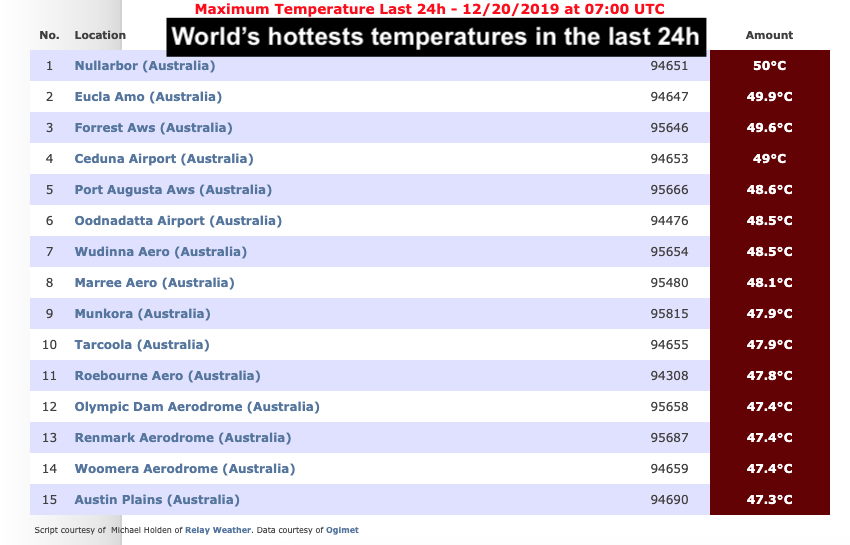 
Nullarbor, a small village in South Australia became the first location to hit 50 deg C, 122 deg F in December's record-breaking heatwave, Eucla Amo was a very close second with 49.9 deg C. In fact, Australia was the hottest country on the planet in the last 24 hours with the top 15 hottest locations of the day going to Australia, with Austin Plains 15th recording a temperature of 47. 3 deg C, (117 deg F). The temperatures are set to increase into today and Saturday and in a cruel twist, if you can stand the irony, Milford Sound in New Zealand, Australia's nearest neighbours was the wettest place in the world, see the banner below.

Victoria state sets new all-time heat records for December. December temperature records tumble Hopetoun, south of Mildura, broke the record for the hottest December day in Victoria when the mercury hit 47.4 deg C, 118 deg F) at 2:16pm. The previous December record was 46.6 degrees at Robinvale in 1976. That record has today been broken at 10 different centres including Hopetoun, south of Mildura, and Horsham, where the mercury hit 47.9C, (118 deg F). Other record-breaking temperatures were recorded at Walpeup, 47.7 at 3:32pm and Mildura which hit 46.8C at 3:49pm. Closer to Melbourne, Avalon hit 45.8C at 4:07pm and at Laverton the top temperature was 45.2C at 5:36pm. ABC

Australian authorities declared a seven-day state of emergency in New South Wales state Thursday as a record heatwave fanned unprecedented bush fires raging across the region. Some 100 fires have been burning for weeks in the state, with only half of those uncontained, including a “mega-blaze” ringing Sydney, covering Australia’s biggest city in a haze of toxic smoke. Bushfires have been raging in Australia for months, killing six people, destroying hundreds of homes and burning millions of hectares of land. At least 3 million hectares (7.4 million acres) of land have been torched across Australia in recent months, with six people killed and more than 800 homes destroyed. Scientists say the blazes have come earlier and with more intensity than usual due to global warming and a prolonged drought that has left the land tinder-dry and many towns running out of water. The Japan Times

Wudinna and Port Augusta witnessed roads melting in the intense heat as the mercury rose above 48C. "McConnal Road, Alma Street, Forster Street and Cobbin Street have all shown signs of bleeding," Port Augusta City Council said in a statement. "A contractor has been engaged to spread rocks over problem areas. SA Power Networks spokesman Paul Roberts warned there was a "heightened risk of extended power outages" in today's conditions. ABC

Two volunteer firefighters died Thursday while battling wildfires ravaging Australia's most populous state, forcing Prime Minister Scott Morrison to cut short his family holiday as authorities braced for temperatures to soar in New South Wales at the weekend. Geoffrey Keaton, 32, and Andrew O'Dwyer, 36, were in a truck convoy fighting blazes southwest of Sydney when a tree fell and caused the vehicle to roll off the road. The two men, both fathers to 19-month-old children, died at the scene while three other firefighters were injured and taken to a hospital. New South Wales Premier Gladys Berejiklian said the injured firefighters were in stable condition. Rural Fire Service Commissioner Shane Fitzsimmons spent the night consoling families of the victims."To not be coming home after their shift is tremendous grief and I applaud the families and the loved ones for their remarkable comprehension of what's been unfolding," he told reporters."Both of these men were very well respected, they were very close, they're a close-knit brigade, they're a very community-focused brigade, work together, socialize together, they're very interactive together."Morrison said the two firefighters were "bravely defending their communities with an unmatched spirit and a dedication that will forever set them apart amongst our most courageous Australians".


Australia's Prime Minister Scott Morrison has returned early from holiday as the country continues to battle a major bushfire crisis. Ros Atkins, the presenter of Outside Source on BBC World News, explains how the fires, a heatwave and drought have led to rising public anger in Australia.