Aussie Bushfire Update: Australia smashes its hottest accumulated temperature for the second day running: The fires started in NSW on the 7th of Nov and will probably carry on burning through Jan 2020 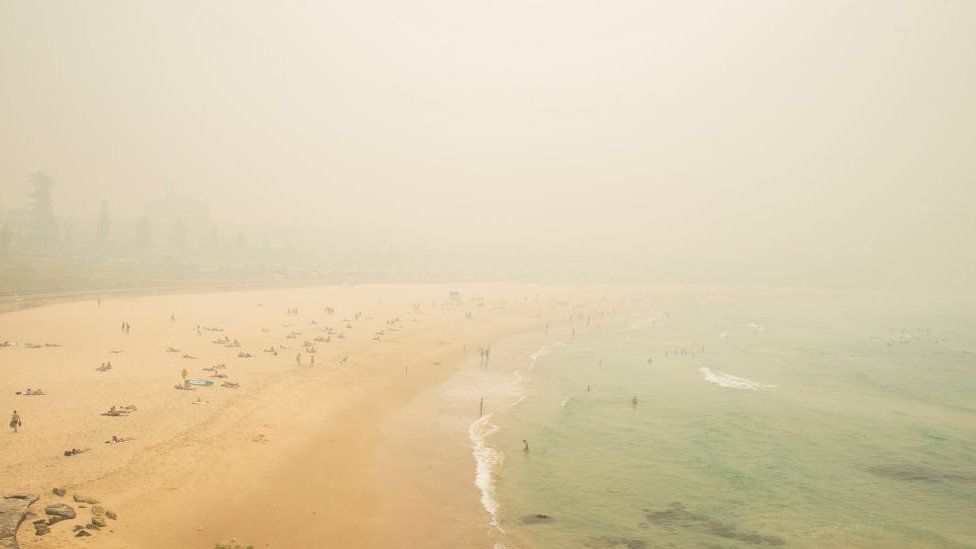 Online, Sydney residents reported breathing problems and said they were "choking" on the smoke. The city has endured air quality surpassing "hazardous" levels for weeks, as about 100 blazes continue to rage throughout New South Wales (NSW). Credit Getty Image

Australia has smashed its National Average hottest accumulated temperature for the second day running when the average across the entire nation registered an average temperature of 41.9C (107.4F) To put that into context, 7 656 127 sq km averaged almost 42 deg C, 108 deg F. 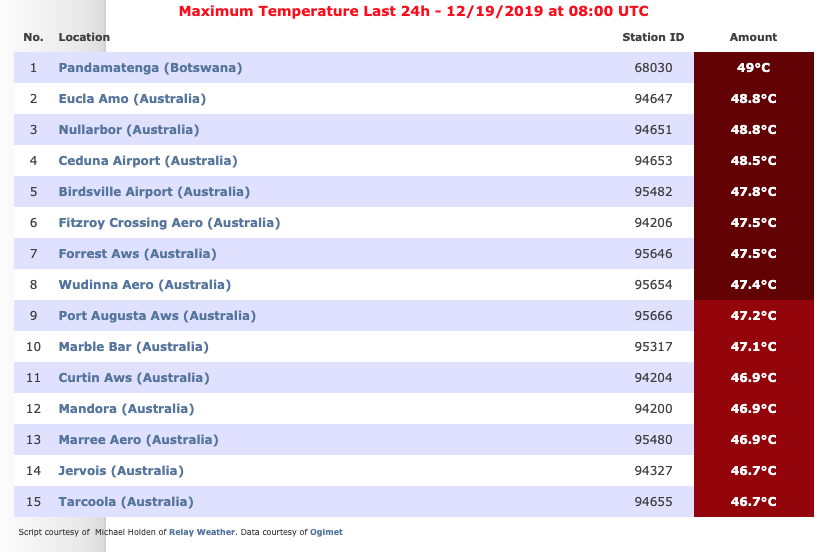 Apart from the Botswana desert Australia dominated the worlds hottest temperature table during the last 24 hours. today's record is unlikely to last very long! Australia is set to become even hotter for the rest of the week. Australia is bracing for its highest recorded temperature ever which is currently 50.7C, (123 deg F). Full story

A shroud of smoke from Australia's bushfires containing high amounts of the tiny particle (PM2.5) which can cause lung cancer has caused chaos in Sydney, bringing dangerous air quality, setting off smoke alarms and ruining visibility in its beautiful harbour. The haze on Tuesday was described by many people as the thickest to blanket the city amid this year's fire crisis. Locals described the situation as "apocalyptic" and "insane", reported the BBC

The fires started in New South Wales on the 7th of November and will probably carry on burning through to late January when sufficient rain is expected to aid the exhausted firefighters. Strong wind warnings and 40 deg C plus temperatures in the coming days have turned Sydney, the home of nearly 6 million Aussies into a gas chamber.

Incredibly, Mr Morrison, Australia's Prime Minister suggested that the fires and smoke were not unusual seemed to defy the continuing run of record-breaking weather as well as repeated warnings from scientists and firefighters that the fire risk is worsening. New South Wales Environment Minister Matt Kean, a Liberal MP, made headlines last week after sternly warning that the hotter weather conditions were "exactly what the scientists have warned us would happen". This week, the Prime Minister faced further criticism after it emerged that he had gone on an overseas family holiday as the bush fire threat continues. The Strait Times

Four bushfires have flared to emergency level, three homes have been destroyed and at least three firefighters have suffered serious injuries as temperatures climb past 41 degrees Celsius across Greater Sydney. Greater Sydney is enduring a dangerous day of heat and fires, with temperatures set to climb as high as 45C in the west and firefighters on alert for "the entire perimeter of Sydney". RFS Commissioner Shane Fitzsimmons said firefighters battling the blaze in Balmoral, south-west of Sydney, had been seriously injured after being "overrun" by the fire.

xx
This Severe Weather Update provides information on the fire danger conditions in NSW. Video is current at 12 pm AEDT 19 December 2019. For the latest weather and warnings, information visit http://ow.ly/zR4050xCLG9 and follow advice from emergency services.