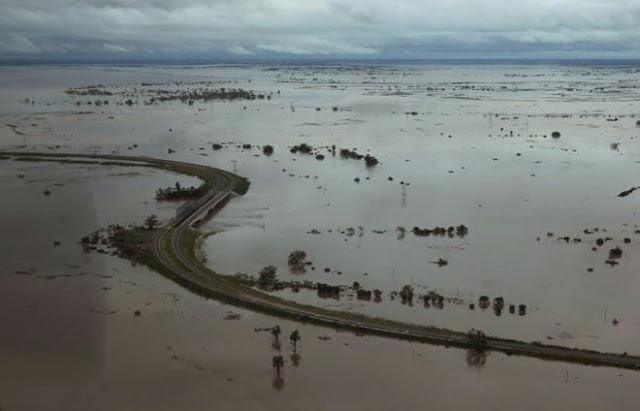 The death toll in Mozambique from Cyclone Idai could be as high as 1,000, President Filipe Nyusi has said.
Fears are growing for more than 500,000 people in the Mozambique city of Beira after aid agency officials warned that 90% of the area had been "destroyed" by Cyclone Idai.
The cyclone slammed into the southeast African country as a high-end Category 2 storm with 175 kph (110 mph winds) at midnight Thursday, causing widespread devastation, before moving inland into Zimbabwe and Malawi.
According to the BBC, the storm made landfall near the port city of Beira on Thursday with winds of up to 177 km/h (106 mph), but aid teams only reached the city on Sunday.
A UN aid worker told the BBC that every building in Beira - home to half a million people - had been damaged.
Gerald Bourke, from the UN's World Food Programme, said: "No building is untouched.
There is no power.
There are no telecommunications. The streets are littered with fallen electricity lines.
In an address on national radio Monday, Mozambique President Filipe Nyusi warned that while the official death toll stood at 84, "everything indicates that we can have a record of more than 1,000 dead."
Nyusi described seeing "bodies floating" in the water after two rivers broke their banks "wiping out entire villages " and isolating others. "It's a real humanitarian disaster of large proportions," said Nyusi.