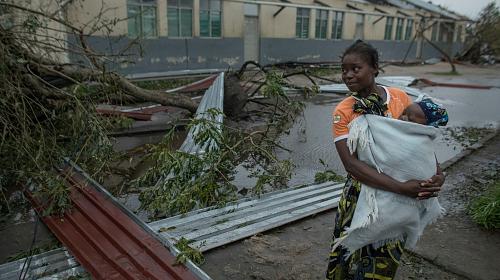 Photo kmaupdates.com
Around 300 dead Zimbabweans have floated all the way into Mozambique according to Pindula News Zimbabwe.
Some have floated all the way into Mozambique and some of the peasants in Mozambique were calling some of our people saying that ‘we see bodies, we believe those bodies are coming from Zimbabwe.
The total number we were told there could be a hundred, some going as far as saying there could be 300 but we cannot confirm this situation; our army is going on foot to Rusitu in order to go and assess the situation on the ground.
Meanwhile, Catch News of India has reported the death toll from the cyclone that smashed into Mozambique and Zimbabwe rose to more than 300 as rescuers raced against the clock to help survivors and the UN-led the charge to provide aid.
"We already have more than 200 dead, and nearly 350,000 people are at risk," Mozambican President Filipe Nyusi announced Tuesday, while the government in Zimbabwe said around 100 people had died but the toll could be three times that figure. The UN, meanwhile, said that one of the worst storms to hit southern Africa in decades had also unleashed a humanitarian crisis in Malawi, affecting nearly a million people and forcing more than 80,000 from their homes.
The United Nations has warned that millions of people will be affected by the deadly storm caused by cyclone Idai in Mozambique, Zimbabwe and Malawi.
Cyclone Idai is one of the worst weather-related disasters on record to affect Africa and the Southern Hemisphere as a whole causing massive disasters accompanied by widespread flooding and devastation.
According to the UN, Cyclone Idai has caused a great humanitarian disaster leaving thousands killed, hundreds injured and properties worth millions destroyed. And, the populace in need of great humanitarian assistance.
The number of people killed in Mozambique by powerful storms and floods across southeastern Africa is likely to rise significantly, the Red Cross said on Tuesday.
Rescue crews are still struggling to assess the devastation caused by Cyclone Idai which swept in at speeds of up to 170 kph from the Indian Ocean late last week, hitting Mozambique, then it's inland neighbours Zimbabwe and Malawi.
An International Federation of the Red Cross and Red Crescent Societies (IFRC) official Tuesday described damage caused for 1.7 million people in the path of Tropical Cyclone Idai as the worst humanitarian crisis in Mozambique's history.