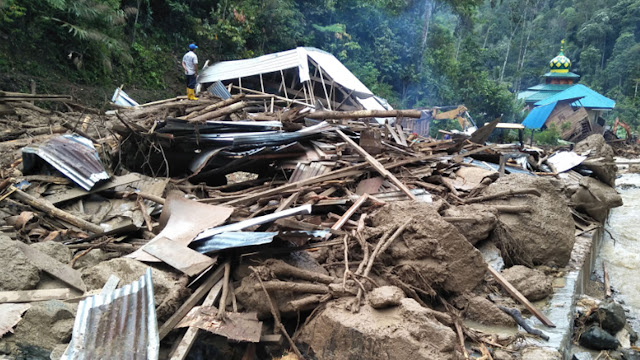 Reuters: Authorities in Indonesia raised the death toll from floods and landslides in the easternmost province of Papua to nearly 80 on Monday as President Joko Widodo called for the urgent evacuation of victims from devastated communities.
The deadly floods and landslide struck at the weekend after torrential rain fell across the Cyclops mountain range, much of which has been stripped of tree cover by villagers chopping firewood and farmers cultivating plantations.
The death toll shot up to nearly 80 from 58 on Sunday as rescuers found more victims as they struggled to clear mud, rocks and shattered trees from the area near the provincial capital of Jayapura, including a 70 km stretch of road.
With 43 people missing, Widodo urged rescuers to step up their efforts.
More than 4,000 people have been displaced and are sheltering in tents, schools, and public buildings.
Disaster authorities have warned provincial officials of the danger of flash floods due to deforestation, said Sutopo Purwo Nugroho, spokesman of the national disaster mitigation agency.
The central government sent supplies of seedlings last year, hoping to help restore some forest cover, he said.