“I’ve been here all my life and I’ve never seen anything like this.” Florida red tide bloom now stretches from the Gulf of Mexico to Fort Lauderdale 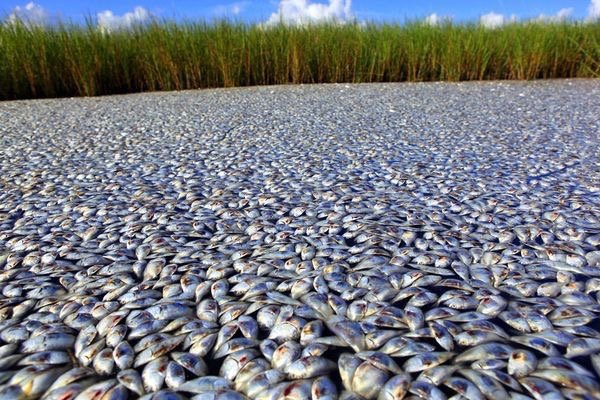 Creditliveoutdoors.com Red
tide algae bloom has now reached Fort Lauderdale on the eastern coast of Florida, the algae bloom now stretches from Navarre beach west of Panama City in the Gulf of Mexico all the way down the west coast of Florida and around the southern tip of the panhandle to Fort Lauderdale on the eastern coast.
This summer has seen the death of millions, maybe billions of marine species from birds to fish, manatees, dolphins and turtles due to a red tide algae bloom with many experts saying they have never seen anything like it before.
The latest report comes from ABC Local News claiming hundreds of dead fish have been found washed ashore Fort Lauderdale Beach, leaving officials to believe that toxic red tide algae has made its first appearance in Broward County.
Mayor Dean Trantalis says beaches in the city will remain open until official test results from the Florida Fish and Wildlife Commission are confirmed.
Those test results are expected to be returned by the end of Friday. Full story here

Meanwhile, Panama City Herald reports, crews might need until the end of Friday to unclog Mexico Beach Canal of fish likely killed by a toxic red tide algae bloom on Tuesday.
Mexico Beach Mayor Al Cathey said the cleanup, which began on Wednesday, would be long and intensive because workers have had to remove the fish by hand with nets since machinery can’t fit in the canal.
Meanwhile, the dead fish and the possible threat of more from another red tide has Cathey and some tourism advocates worried about a drop in visitors to the city and their wallets.
“This is probably the biggest fish kill we’ve ever had in our canal,” Cathey said.
“I’ve been here all my life and I’ve never seen anything like this.” Full story here


Crabs are the latest casualty of Southwest Florida’s lingering red tide problem as hundreds of them have washed up dead or dying on beaches in Collier and Lee counties since Saturday.
Billy Norris, a Naples resident and owner of Pale Horse Fishing Charters, was at Bonita Beach Monday where he saw masses of dead crabs.
“They were all crawling out because I guess they couldn't breathe in the water,” Norris said.
“Then they were dying on the beach."
"The sheer amount of them was pretty amazing."
On Wednesday, Bonita Beach’s water was a rusty, red colour and its shore was still littered with crab claws and dead or dying crabs of different sizes and species including blue crabs, Atlantic horseshoe crabs, calico crabs and Cuban mole crabs. Full story here

From the end of September.


It is astonishing, jaw-dropping! THOUSANDS OF TONS (MILLIONS MAYBE BILLIONS) of Marine species dead along the entire Florida west coast since May 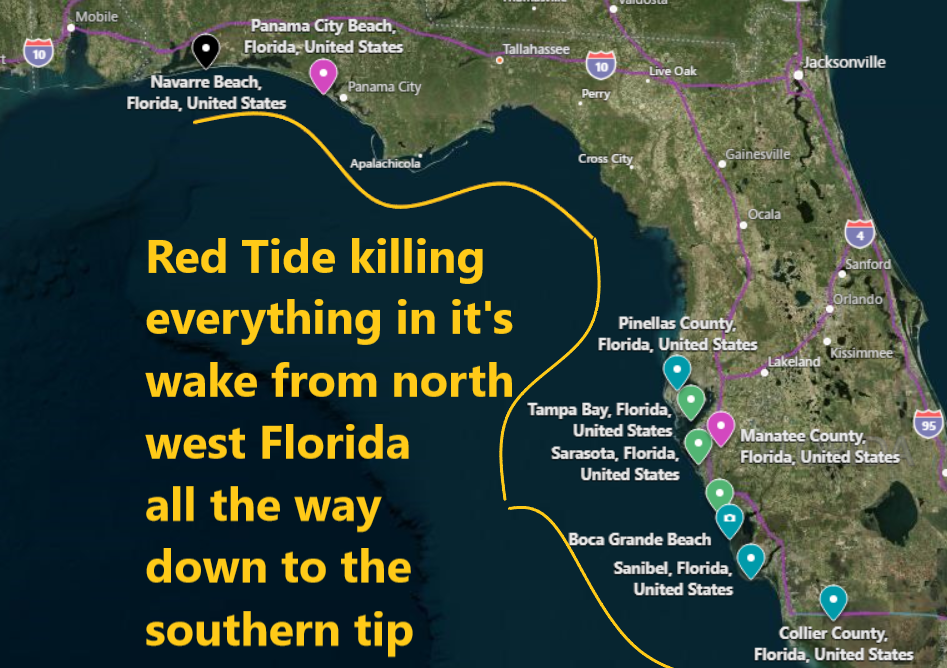 Google Maps
It is astonishing, jaw-dropping even, it should be world news or at least national news but the fact is since May this year the entire west coast of Florida, from Navarre Beach in the north all the way down to Collier County in the south has witnessed the death of millions, maybe billions of marine species from birds to fish, manatees, dolphins and turtles due to a red tide algae bloom and it only made local news.
Below is a list of die-offs, (with links attached) along the entire west coast of Florida since May, the list is frightening.
It started off slowly...And then exploded.
Below is not a true figure as many more species will have died out at sea.
On May 4th A Navarre woman spotted nearly 100 dead birds within a one-mile radius on Navarre Beach Full story
On the 3rd of June, The Tampa Bay Times reported Freshwater turtles began turning up dead along the St. Johns River in January. Now about 100 dead or dying turtles have been found in water bodies in Orange, Seminole and Putnam counties. A few reports have come in from other locations, such as Trout Lake near Eustis in Lake County. Full story
On the 27th of June, a Florida beach was littered with 'hundreds' of dead fish, manatees and other marine life. Hundreds of dead fish, manatees, sea turtles, eels and other types of marine life were found washed ashore on Boca Grande beach. Full story
On the 1st of July, Fox4 reported, Red Tide caused large fish kills in Englewood. Manatees, turtles, and snook were popping up everywhere. The most recent Red Tide event to hit Southwest Florida has been devastating for the beaches and the people who make their living off of them. Full story
On July the 31st, Miami Herald reported dead fish, birds, manatees, even a whale shark washed up dead at Cape Coral as the toll from worst red tide in decades grows. Dead fish by the thousands have clogged inlets and canals. 10 dead Goliath grouper, the massive reef fish that can live four decades or more, have floated to the surface. At least 90 sea turtles have been found stranded as the tide stretches well into nesting season. Full story
On August the 1st News-Press announced Lee County had opened fish disposal sites as the Florida algae crisis continued. Dead sea turtle count at 400. A local fisherman claimed: "There’s lots of dead everything here," Wasno said. "I’m watching a sea trout die right at my feet. There’s mullet, snook, pinfish, sea snakes, small grouper, and there’s a lot of it." Full story
On August the 6th Fox13 announced tons of dead fish shovelled from beaches along Sarasota County. Dead fish are now washing ashore on Anna Maria Island after the red tide bloom drifted slightly north over the weekend. Meanwhile, crews in Sarasota County say they removed several tons of dead fish over the last two days alone. Full story
16th August - 3 MILLION lbs of dead fish washed up on beaches in Lee County, Florida: The latest numbers from Lee County officials on Thursday reveal that well over 3 million pounds of fish have been removed from local coastlines. The county reports that contractors removing fish from Lee County beaches have amassed more than 1,400 tons of fish, and that crews in Sanibel have collected an additional 309 tons. Among the dead fish found include one dead Whale Shark on Sanibel, and numerous large goliath grouper and tarpon. Full story
22nd August - 15 dead bottlenose dolphins wash up dead in Sarasota:  “I have never come across something like this ever,” Master Police Officer, Paul Joyce, with the Venice Police Marine Patrol Unit said. Full story
23rd August - Thousands of dead fish wash up again in Sarasota. A witnessed claimed she’s seen everything from pinfish to puffer fish to catfish float up in the marina. Red tide isn’t just stinking up Sarasota — over the last day or so most of Bradenton has been smelling like a pile of dead fish. The algae bloom sets off a distinguishable stench, one that readers told the Bradenton Herald they could smell from downtown. Full story
27th August-240 TONS of dead fish wash up, due to red tide in Manatee County, as of Monday, the county had already collected about 241 tons of red tide-related debris left on Manatee County beaches, parks and waterways, cleaning up the majority of fish kills, officials announced during a news conference. Full story
10th September - 33 TONS of dead fish wash up, due to red tide in Pinellas: Red tide is officially impacting Pinellas County. Crews have picked up a total of 33.48 tons of dead fish and hauled them off to the county dump. Tests conducted Monday show the highest levels of the toxic algae bloom near John's Pass and Madeira Beach. Low levels were also found near the Bellair Boat Ramp and Sand Key near Clearwater Pass.
17th September - Thousands of dead fish wash up due to red tide on Panama City:
Beachgoers in Panama City Beach were greeted by a grisly sight this weekend: Thousands of dead fish spanning the coastline. The killer? Red tide. Full story
Earth has crossed its own tipping point and is creaking under the strain: Two-thirds of animals extinct by 2020!