Most of the Philippines in the "Extreme Caution" classification as heat index rising to a high of 47.7°C (118 deg F) in some parts 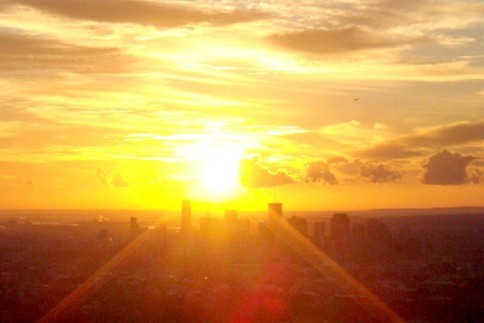 Photo eco-business.com
Filipinos across the country are at risk of heat exhaustion and even heat stroke as the heat index spiked to over 41 degrees Celsius in several areas.
According to data released by PAGASA, the heat index rose past 41°C in at least 14 areas in the country on Sunday, April 22, rising to a high of 47.7°C in Sangley Point in Cavite.
The heat index is the measure of the temperature that a person feels and is essentially the "apparent temperature" felt by the human body, which is computed by factoring in the humidity as well as the ambient dry bulb temperature (what we usually think of as air temperature in general).
The state weather bureau's scale classifies heat index temperatures from 41 to 54°C as dangerous.
At this level, PAGASA said "heat cramps and heat exhaustion are likely" and that "heat stroke is probable with continued activity."
Other areas in the Danger classification are San Jose City, Occidental Mindoro (45.8 degrees); Surigao City, Surigao Del Norte (44.6 degrees); Dagupan City, Pangasinan (44.6 degrees); and Cuyo, Palawan (43.6 degrees).
Also in the same classification are Casiguran, Aurora (43.4 degrees); Daet, Camarines Norte (42.7 degrees); Aparri, Cagayan (42.6 degrees); Cabanatuan, Nueva Ecjia (42.4 degrees); Laoag City, Ilocos Norte (42.2 degrees); Cotabato City, Maguindanao (41.8 degrees); Tuguegarao City, Cagayan (41.8 degrees); and Zamboanga City, Zamboanga del Sur (41.4 degrees).
According to PAGASA's five-day forecast, most of the Philippines will be in the "Extreme Caution" classification until Friday, April 27.