2016 is once again the warmest year on record topping 2015: Extreme weather is 'climate changed' and will increase month by month for ever and ever 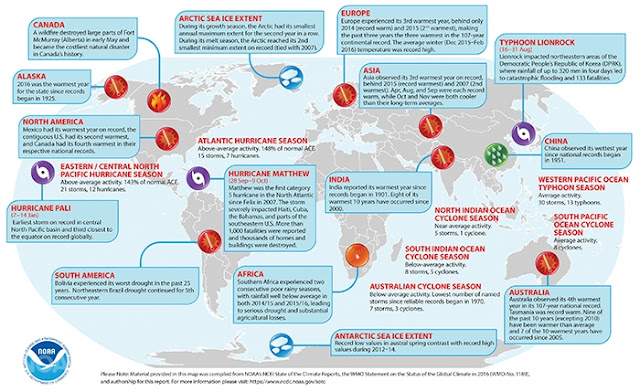 
The 27th annual State of the Climate report has confirmed that 2016 topped 2015 as the warmest year in 137 years of record keeping.
The report found that most indicators of climate change continued to follow trends of a warming world, and several, including land and ocean temperatures, sea level and greenhouse gas concentrations in the atmosphere broke records set just one year prior.
Now if you are leaning to the left and pushing global warming or leaning to the right and screaming ' lies lies lies,' you have to come together and agree, something is wrong with our weather.
If you are in tune with just your local news on TV well then you might just wonder what I'm talking about, it's only when we see the whole picture, on a daily global report, week in week out can we see just what is going on with our wonderful planet.

For example just this week The Big Wobble has reported almost 1,000 dead or missing after a massive landslide caused by unprecedented rainfall in Sierra Leone.

Nunavut locals were cooling off in the Arctic ocean as warm records tumbled in the High Arctic islands, a few years ago these islands would have been covered in snow and not basking in near tropical temperatures.

Another landslide killed at least 50 after a cloudburst on hill-top at Himachal Pradesh India.


Greenland covered mostly by ice is the latest country to be hit by wildfire in a summer dominated by heatwaves and fires...

This summer has seen incredible temperatures around the Northern Hemisphere with heatwaves all over with temperatures often hovering over 50 deg C or 122 deg F.

Wildfires, droughts, freak storms, flooding has now become the normal, as every monthly climate report now leans towards the extreme, in short our planet has reached a tipping point and I believe the runaway weather extremes are here for ever and...they will increase month by month and it is a problem which can't now ever be fixed, in my humble opinion of course.

Below is highlights of the recent International report which confirms 2016 was the warmest year on record for the globe as last year marked the 3rd consecutive year of record warmth.

The 27th annual State of the Climate report has confirmed that 2016 topped 2015 as the warmest year in 137 years of record keeping.
The report found that most indicators of climate change continued to follow trends of a warming world, and several, including land and ocean temperatures, sea level and greenhouse gas concentrations in the atmosphere broke records set just one year prior.
Last year’s record heat resulted from the combined influence of long-term global warming and a strong El Nino early in the year.
This annual check-up for the planet, led by researchers from NOAA’s National Centers for Environmental Information, is based on contributions from more than 450 scientists from nearly 60 countries.
It provides a detailed update on global climate indicators, notable weather events and other data collected from land, water and space. It’s published as a special supplement to the Bulletin of the American Meteorological Society.


State of the Climate Report 2016 (AMS)
Notable findings from the report include:
For more, see the full State of the Climate 2016 report, offsite linkhighlights and downloadable visuals.
Media contacts:Brady Phillips, 202-407-1298John Leslie, 301-713-0214