'Thousands of people in peril!' Hundreds of Canadian soldiers deployed as fast-rising lakes and rivers bring chaos to the province of Quebec 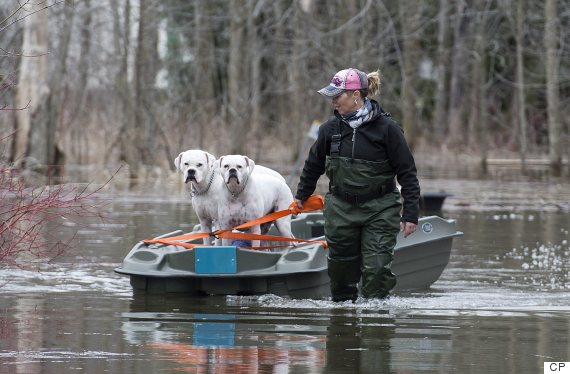 Photo huffingtonpost.ca
Hundreds of Canadian soldiers deployed across the province of Quebec Saturday in response to fast-rising lakes and rivers that have soaked homes, sapped spirits and put property, roads and thousands of people in peril.
Along the Ottawa River across from the nation's capital, on the western shores of the island of Montreal and along the banks of the St. Lawrence River, residents scrambled to fill and place sandbags, move valuables to higher ground and hope that their pumps could clear their waterlogged basements faster than the rain that was falling from the sky.
"We have a few more difficult days ahead of us," said a rain-soaked Quebec Premier Philippe Couillard after touring some of the affected areas and meeting with evacuees in the town of Rigaud, near the Quebec-Ontario border.
That was no comfort for residents of Île Mercier, on the outskirts of Montreal, who have already been cut off from their homes after water levels in the Riviere des Prairies rose higher than the only bridge permitting them access.
In Gatineau, across the turbulent Ottawa River from the Parliament buildings, Quebec Public Safety Minister Martin Coiteux urged those who are asked to evacuate their homes to co-operate with authorities.
"If we're asking you to leave your home, it's really because we want to protect you," he said.
"It's for your safety, for the safety of your families, for the safety of the whole neighbourhood."
In the Pierrefonds-Roxboro neighbourhood in the north end of Montreal, 47 patients at a rehabilitation centre overlooking the river were evacuated after it was determined that any further rise in the water levels, or breach in the dikes that have been installed, risked trapping them in the building, said local Mayor Jim Beis.
"The ground level was completely covered in water.
The underground basement as well," he said.
Steven MacKinnon, the federal Liberal MP for Gatineau, said he spent the day touring the worst-affected areas in his riding and was struck by the community spirit - particularly the hundreds of volunteers who arrived at a local hockey arena and put a dump-truck load of dirt into sandbags in just two hours.
They are greatly needed by people trying to defend their homes.
"Folks are still (in their houses), but basically it's just to try and keep the pumps running.
The water has come up about six or eight inches already today and it's still rising," he said.
"People are afraid, it's safe to say."
In another neighbourhood in the city - the hardest hit and also one of the poorest - floodwaters have filled the basements of homes and are now pouring into first floors.
"You have to think that many of those houses are a complete writeoff," MacKinnon said.
In the town of Yamachiche, located on the northern shore of the St. Lawrence River about halfway between Montreal and Quebec City, residents are used to minor flooding each spring, and a number of houses are built with such seasonal considerations in mind, said Mayor Michel Isabelle.
This year, the levels are much higher.
"The difference is dramatic.
It's about 18 or 20 inches higher, easily," he said.
"You can only get around in a canoe or a rowboat, whereas normally you can still use the roads.
This year is really something else."
The military came Saturday morning to survey the damage in Yamachiche and are expected to bring some muscle and logistical support to the town, mainly by filling and placing sandbags, Isabelle said. About 400 soldiers in all were being dispatched from CFB Valcartier, near Quebec City, Saturday morning.
MacKinnon hopes the military presence in Gatineau will also bring a sense of security to people watching the rising waters from their front porches and worrying about looters adding to the loss. "They can keep watch over these neighbourhoods.
They can furnish all sorts of equipment that can make accessible places that were inaccessible, whether with Zodiacs or heavy equipment that can navigate these waterlogged streets," he said.