Gas leak creating a "dead zone" of unknown expanse and highly toxic to marine life, including beluga whales has been been bubbling away for 10 days in Alaska's Cook Inlet 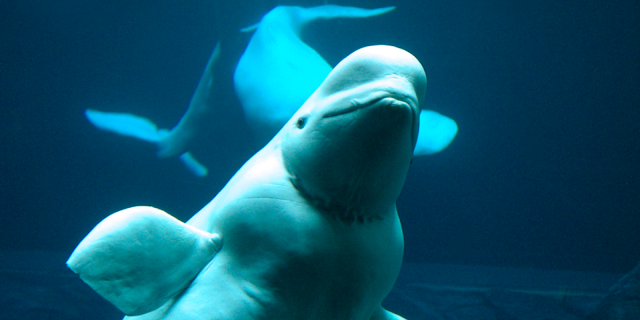 Photo countercurrentnews.com
Natural gas for at least 10 days has leaked from an underwater natural gas pipeline in Alaska's Cook Inlet and floating ice has prevented divers from reaching the site.
The gas is bubbling from an 8-inch pipeline in 80 feet of water about four miles off shore.
The pipeline belonging to Hilcorp Alaska, LLC, moves processed natural gas from shore to four drilling platforms in the inlet.
The Alaska Department of Environmental Conservation is investigating the leak.
In an email response to questions, spokeswoman Candice Bressler said the agency is assessing public health and environmental risks.
"We believe the risk to public health and safety is small," the agency said.
"Environmental risk is less easy to quantify since a monitoring and assessment program is not yet in place."
The federal Pipeline and Hazardous Materials Safety Administration also is investigating.
The U.S. Coast Guard warned mariners to stay at least 1,000 feet from the bubbling gas.
Another federal agency expressed concern over possible adverse effects on marine mammals.
"Our greatest concern is for endangered Cook Inlet beluga whales and impacts to their critical habitat," said Julie Speegle, spokeswoman for the fisheries section of the National Oceanic and Atmospheric Administration, by email.
The natural gas discharge is within the winter foraging area for the white whales, she said.
The cause of the leak is unknown.
Stopping the leak is not as simple as shutting down the gas supply line, the state agency said.
"There are significant issues associated with shutting down the pipe, including the safety and safety systems of the crews on the four platforms that the pipeline supplies," Bressler said in the agency's prepared statement.
The agency concluded there was low risk to public safety because there are few people in the area this time of year, the incident is far off shore and there is minimal boating because of ice.
Hilcorp spokeswoman Lori Nelson in an email said platform crews have shut down non-essential equipment to reduce natural gas flow to the minimum gas pressure possible without jeopardizing employee safety or the environment.
"If a minimum pressure is not maintained in the pipeline it could fill with water which would allow for the escape of residual crude oil, as this line was previously used as a crude oil pipeline," Nelson said.
The company estimates the pipeline is emitting 210,000 to 310,000 cubic feet of gas per day.
The Alaska Department of Environmental Conservation has not made an independent estimate.
A Hilcorp helicopter flying to a drilling platform on Feb. 7 spotted gas bubbling to the surface. Hilcorp reported the leak to the National Response Center, the federal point of contact for all spills, and the Alaska Department of Environmental Conservation. Processed "dry" natural gas is nearly 99 percent methane.
Hilcorp hired a diving company to assess damage when the leak was discovered, the state agency said.
Diving was determined to be unsafe because of ice in the inlet.
Environmental groups say the gas leak will harm the inlet.
Kristen Monsell, an attorney for the Center for Biological Diversity, said natural gas spills are highly toxic to marine life, including the prey needed by beluga whales.
Cook Inletkeeper, a nonprofit group dedicated to protecting the Cook Inlet watershed, gave formal notice Wednesday that it intends to sue Hilcorp under provisions of the Clean Water Act.
The 60-day required notice said the discharge of methane is displacing oxygen in the water column and creating a "dead zone" of unknown expanse that could harm or kill fish and wildlife.
The group called for an immediate halt to illegal discharges of natural gas.