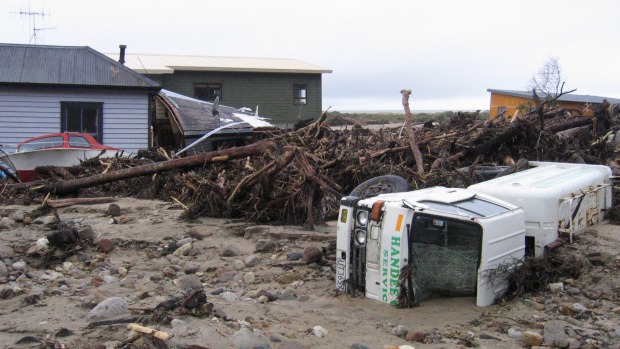 Photo stuff.co.nz
After a once in "500-year event" hit the Bay of Plenty New Zealand,heavy rain and renewed flood danger is set to target New Zealand next week.
An area of low pressure containing high levels of tropical moisture left over from the remnants of Cyclone Debbie resulted in torrential rains on the northern island of New Zealand.
The severe weather caused power outages and school closures.
Wellington Airport was closed for a short time.
Two districts of Whanganui and Rangitikei, both in Manawatu-Wanganui Region declared states of emergency ahead of expected flooding.
The exact number of people told to leave their homes for higher ground isn't clear but thought be in the thousands. Since then rivers in the Bay of Plenty region of the country have overflowed, causing major flooding.
Whakatāne District authorities said on 07 April. New Zealand will face heavy rain and a renewed danger of flooding next week on the heels of once-Severe Tropical Cyclone Debbie.
A slow-moving storm tapping into tropical moisture will once again swamp the country with rounds of downpours from later Tuesday into at least Thursday night, local time.
The heaviest rain may initially focus on the northern and central South Island before targeting the North Island during the late week.
Areas that endure the heaviest and most persistent downpours may be subjected to 50-100 mm (2-4 inches) of rainfall.
It is not out of the question for locally higher amounts, especially in the higher terrain.
Typically, that amount of rain alone would raise concerns for flash flooding, but Debbie’s torrential rain has left the area extremely vulnerable.
The already saturated ground will not be able to absorb much rainfall, and swollen streams and rivers may quickly overflow their banks.
Conditions will be exacerbated where flood waters remain.
Residents in flood-prone areas should prepare for new evacuation orders.