Florida state of emergency! 2017 shows a 250% increase in forest fires along with a crippling drought: 68,000 acres destroyed by fire so far this year: Worse to come! 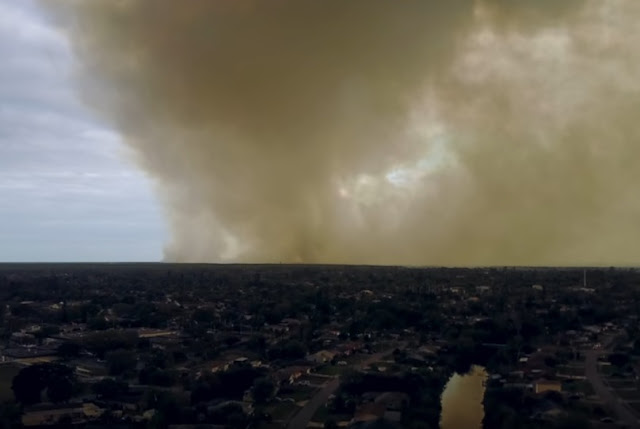 Florida Gov. Rick Scott declared a state of emergency Tuesday as more than 100 wildfires blaze across the state.
More than with a quarter of the fires are burning more than 100 acres each, according to the Florida Forest Service. Since February, more than 68,000 acres have been scorched across the state.
"Much of Central and South Florida are approaching drought-like conditions and the chances for wildfires are continuing to increase with hotter temperatures and low rainfall.
This may only get worse as we enter the hotter summer months and it is crucial that we take every action right now to be prepared," Scott said.
"It is incredibly important that wildfire response is swift and deliberate and this state of emergency will make it easier for our state, regional and local agencies to quickly work together to protect our families, visitors and communities."
Drought conditions have already spread throughout the Florida Peninsula.
About 42 percent of the state was in drought as of April 4, said weather.com meteorologist Chris Dolce.
Some of the worst drought conditions are in southwest Florida where Naples has a rainfall deficit of more than 8 inches since Nov. 1, Dolce added.
Agriculture Commissioner Adam Putnam told News 6 that this is the most active wildfire season since 2011, with a 250-percent increase in acreage burned in the first three months of this year since compared to last year.
A fire in the Big Cypress National Preserve, called the Parliament fire, is the largest active blaze and has burned more than 41 square miles and is 95 percent contained, according to Inciweb.
That fire started March 18. Another fire that began March 30 in the preserve, the Cowbell fire, has burned more than 16 square miles and is 5 percent contained.
On Monday, a man was charged with reckless burning of leaves in connection with a large blaze that broke out on St. George Island over the weekend, the Tallahassee Democrat reported.
No injuries or property damage was reported, and the fire was extinguished by Saturday around midnight.
Wildfires can occur in Florida any time of year, Dolce said, but they can be particularly active in the late winter and spring months.
"This is due to the fact that the state is in the typical dry season when rainfall is less frequent and the air is less humid," said Dolce.
"The air becomes more humid and the return of afternoon thunderstorms begins in late spring and continues through summer, lessening the wildfire threat."