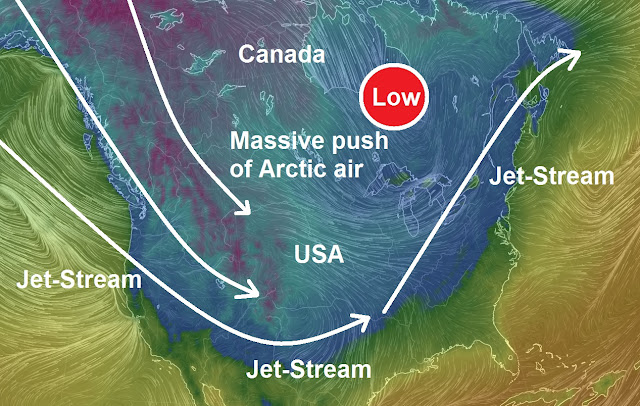 
Sunday’s snow fall in Chicago, which was the first this winter for Illinois was a record-busting event. Sunday’s 6.4 inches of snow at Chicago’s O’Hare Airport smashed the old Chicago record of 4.8 inches way back when in November 1940! Some surrounding areas recorded more than 9 inches of snowfall and was also the greatest first-of-the-season daily total for the area. Davenport recorded 10.2 inches. According to the National Weather Service, the 6.4 inches at O’Hare was only three-tenths of an inch away from the all-time single-day snow total. The previous record for snowfall on Dec. 4 at O’Hare was 4.6 inches in 1964.
This week will see extreme cold moving into Canada and the US as a blast of frigid air moves in from the depths of the Arctic.
Temperatures humans should not have to endure will sweep Canada and the US all the way down to New Mexico. The coming days promise to be the coldest of the winter season so far. The coldest days of next week will yield highs and lows of generally 10-20 degrees Fahrenheit below normal from the Northwest and Rockies to the Gulf and East coasts. Departures from normal highs will even approach 30 degrees in Billings, Montana, and Denver, Colorado.

Southern Manitoba was battered by a storm that shut down many schools, reduced visibility, turned roads into slippery and snow-covered messes and sent cars into ditches Tuesday. Snowy side streets caused the Winnipeg School Division to warn parents their kids might not make it home on the school bus Tuesday afternoon. The majority of southern Manitoba was covered by a winter storm warning, with a range of 15-30 centimeters of heavy snow expected. Winnipeg was expected to get 20-25 centimeters, while 30 centimeters was forecast to hit areas south of the city. Northerly winds gusting to 70 km/h were expected to develop, making visibility on roads extremely poor - and near zero - for parts of Tuesday and into Wednesday as well. In southeastern Manitoba, a further 10-20 centimeters of snow is possible by Wednesday morning. The intensity of the storm prompted a full-out blizzard warning for some areas, including Morden, Winkler, Altona, Morris and the rural municipality of Portage la Prairie. The snow and wind were forecast to gradually ease Wednesday night. Bitterly cold Arctic air is expected to sweep in with lows below -20 C expected by the end of the week and wind chill values in the -30 to -35 range. The sleepy Interlake town of Gimli looked like an advertise for Game of Thrones. Manitoba filmmaker Andy Bliq went to the shores of Lake Winnipeg to watch the waves roll in. "There are these enormous rollers coming in from the north. You can imagine the wind blowing down the full length of the lake - 400 kilometers. They are about at least a meter high, some of them and crashing right over the pier," he said.

A winter which is already breaking records

wow...winter...must be the end of the world.

I agree with the other anonymouses. It's weather.... It goes up and it goes down ... Sometimes it breaks a "new" record. Get a jacket.

Need more than a jacket!

Layer jackets: I wear a med. size jacket over a lg. size soft shell jkt, wear a scarf around my neck and polyester knit jogging pants and we don't even get snow where I live, just cold and windy.

Just keep safe out there!

The existence of laws about cars, houses, or guns prove that these things exist, and exist in the quantity needed to produce the type of laws we see on our books. If an alien from outer space were to visit this Earth many eons from now, and wanted to find out how we humans moved about our cities, for example, he would have to look no further than the laws in our records to know that we operated a machine we called autos. He would further be able to ascertain much technical data about the auto from the laws in our records just by studying the regulations governing their use.

To put this principle in another way, the very existence of laws about autos proves that autos exist, and exist in enough quantity to prove to be a huge problem without the laws that regulate them.

Of course, the same could be said for anything in our society, both technical and non-technical.

Since this is true, you can imagine our surprise and shock when we discovered that a United Nations Treaty exists which pledges all member states to refrain from using Weather Control as a lethal weapon upon other states!

The existence of this recorded law -- this U.N. Treaty -- proves the existence of the reality of Weather Warfare! https://ruralsurvival.info/jm_gulf_stream_has_stopped.shtml Gulf Stream being at risk of stopping in my 2005 paper "No Need For Panic". At that point in time I had been aware of the Gulf Stream being at risk of stopping for a couple of years. On November 27, 2005, the scientific community admitted that the Gulf Stream had lost thirty percent (30%) of its mass and velocity. The same press release stated that the computer models were estimating that the Gulf Stream would stop in 5 to 20 years, that is before 2025 – well within our lifetimes. On June 12, 2010, the Gulf Stream stopped. A bit of explanation is in order:

It was disrupted and lost its connection with the Gulf Stream after the BP spill and the Corexit, thus breaking the connection of the warm Gulf of Mexico water with the rest of the Gulf Stream. Matt Simmons may have been killed for revealing too much about the problems of the consequences of the BP oil spill and the shut down of the Loop Current, The Conveyor, and others. This river of warm water moving through the colder North Atlantic Ocean begins in the Gulf of Mexico and the Caribbean. It is a continuous current moving around our planet, which does not really “begin” anywhere. It exists rounding the Southern tip of Africa, and crosses the South Atlantic, with some of it moving south of Cuba and into the Gulf of Mexico and another part moving up East of Florida and then, it moves up the Atlantic coast of Florida until it gets to Cape Hatteras, North Carolina, and then it turned east across the Atlantic Ocean towards northern Europe. Up until June 12, 2010, it continued east to the British Isles where it split with part going north to warm Iceland with the rest going south warming Scotland, Ireland, England, France, Spain and Portugal. Now it goes a couple of hundred miles east of Cape Hatteras, North Carolina, and stops! (Here’s the link to see the U.S. Navy map of the North Atlantic, which depicts water temperatures and placed a large yellow arrow pointing to the stopping point of the Gulf Stream :

That darn GLOBAL WARMING sure is a tough one. Makes me want to dig out my long under ware and flannel shirt.

The spelling, punctuation, and grammar in these articles are positively vexing!

Thanks for the input Gerri, all the above have been discussed many times on this site

You don't really believe in global warming do you? For the last few years we've been in a northern vortex. Global warming made one man rich as "inventing the internet" did.