Pig Scare! African Swine Flu's mortality rate is 100% and it's back! Well, it never went away, Covid took over" China and Vietnam have reported hundreds of outbreaks of ASF since September. Between 2016/19, 50% of the global population of pigs died or was culled due to the disease 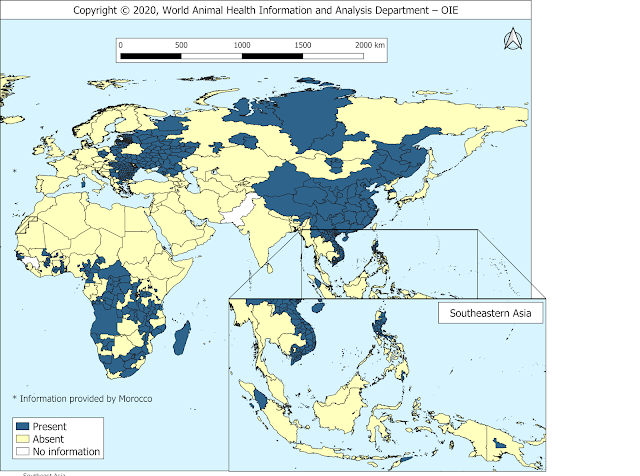 Global distribution of African swine fever from 2016 to 2021

The World Organisation for Animal Health (OIE) has reported an outbreak of African swine fever (ASF) at a pig farm on China's Hainan island. A major outbreak of the virus in 2018 saw pork prices pushed up as output fell. On Tuesday, the OIE issued a notification saying that ASF, which is harmless to humans but deadly to pigs, had been reported at a pig farm in China. The farm is located on Hainan, an island just south of mainland China.

A 2021 Chinese study estimated that the 2018-2019 outbreak contributed to a total economic loss of more than 1% of China's gross domestic product in 2019. The outbreak led to the deaths and culling of hundreds of millions of pigs and a huge rise in the price of pork - China's most-eaten meat.

Tuesday's report is not the first such outbreak of swine flu registered in China this year. Earlier in 2021, a number of cases were noted in Sichuan - the country's top hog-producing province. China is the world's top pork producer and is home to half of the globe's pigs.

Several localities in central Vietnam, including Nghe An, Ha Tinh, Quang Nam, and Quang Tri provinces, have announced hundreds of swine fever outbreaks, noting that the situation has been more complicated since September.

Measures are being taken to encircle, control and extinguish the outbreaks. There are very high risks that the swine fever will occur and further spread in the remaining months of this year, said the Department of Animal Health under the Vietnamese Ministry of Agriculture and Rural Development.

Changing weather, increasing slaughtering, transportation, and trading of pigs in the time to come, and fewer resources available to counter the swine fever due to COVID-19 were among the main reasons for the outbreaks, according to the department. By the end of October, over 1,900 African swine fever outbreaks were confirmed across 57 localities nationwide, leading to the culling of nearly 160,000 pigs or 0.6 percent of the country's total herd, local media cited the department as reporting.

2019, has become the year when the pork farming industry began to unravel in China, which produces half of the world's pork. In 2019, pork sales dropped by almost one-third because 200 million pigs had been culled or died from being infected as African swine fever spreads through the country.

That decline would be nearly 30 percent larger than the annual output in the United States and equivalent to Europe’s yearly pork supply, Rabobank added.

With the arrival of Covid in the last couple of years, the African Swine Flu threat has gone largely unreported in the MSM, however, the threat to the pig supply has not gone away.

There is no known cure for African Swine Flu and the mortality rate is 100%, if an unfortunate pig catches the disease it is fatal. At the moment the disease is harmless to humans, however...

An infectious disease expert at the University of Alberta says it's shocking to hear about Canada's first human case of a rare swine flu variant, but she hopes it's likely a one-off situation. Dr. Lynora Saxinger, an associate professor in the department of medicine, wrote on Twitter "what fresh hell is this"[?] when she first heard about the case in central Alberta. TBW

Isn't it sad!? Really pains me to see the enormous amounts of animal die off's going on globally these end of days.
If you pay attention to the words used in these kinds of reports (similar also with the 2nd post on the seals off africa washing up dead), you can notice some discrepancies. For this one swine flu is blamed/suspected and it says cannot infect humans so far (one case is all they note) yet just a couple years ago there was a swine flu vaccine for people!....?.... in fact it was even injected in to millions of people....they say 25 deaths occurred from that vaccine and it was pulled off the market and stopped for 25 deaths! Are you seeing my point yet? Compare that to today's toxic covid injection.

Another point in discrepancies written by official idiot liars here is, the swine FLU is a disease, what!? How is flu a disease? It is NOT.
Hey, that's what it said about covid too and all this time I have questioned that with zero answers received. Covid is an upper respiratory FLU, but it's SARS-COV a said FLU that causes the disease covid19....?.... so then what is the disease specifically and why is there a vaccine for a disease when disease is NOT A CONTAGION? Disease is from POISON!! Never has any info answered that for me probably because it's all bull shit as I know it is.
So, the culling of livestock is all just pure evil IMHO. No proof of anything they claim, beit for pigs, chickens, cows or humans. Flu is NOT disease it is a said viral infection but sars is what, bacterial?, viral?, and causes a disease no one tells of and has no name other then covid19 a said bad flu....but it's a disease too? It's a lie, that's why it makes no logical sense!
Disease comes from poisoning.
Flu? Bacterial infections? Disease? Is it all related? Oh wait, SARS is said to be some new more deadly pneumonia like infection....ok but that is not a disease and on and on goes the insane reasons from "stumped" scientists and medical professional idiots to write as reply to huge abnormal life form die off's. ! Oh they're so stumped, why are such massive amounts of LIFE dying before our eyes?

Gee, do ya think it might be all that shit being sprayed in the skies daily? Or maybe the UVC radiation? Or what about maybe the fact that the radioactive leaks globally have killed most of the oceans life so no food for seals etc. and on land....well gmo feed and all the toxins injected in to livestock?
If "they" are so worried about our health to be pushing vaccines down our throats to help us be protected (but not from flu, ugh I mean disease...? ) then ask yourself why are they spraying the air we breath and lying about it so that element never enters the calculating of why any of these negative after effects are happening. There is absolutely nothing they say that I believe anymore. Liars is all we listen to. Trust your eyes not their lips! Oh, and FEED THE WILDLIFE, dont listen to their insanity saying dont feed a starving seal or bird or any life form that is starving, feed them!! Damn idiots is all that is in control of news, complete idiots or just psycho liars. Pick one.