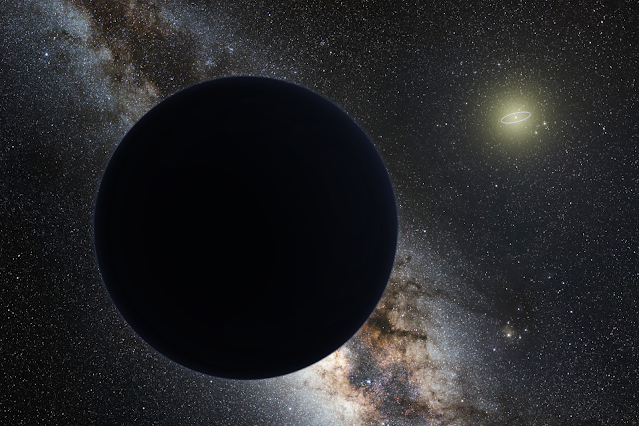 Planet Nine depicted as a dark sphere distant from the Sun with the Milky Way in the background. nagual design; Tom Ruen, background taken from File: ESO - Milky Way.jpg - Own work: Wikipedia.

I have always thought Planet X was a joke, like the flat-earthers, promoted by conspiracy theorists, that was until I started to research the subject.

In 1972, NASA launched the space probe Pioneer 10, its main goal was to search for a "mysterious 10th planet” (Pluto in those days was still considered a planet) in our Solar System or just beyond. This search led NASA to make a surprising press release 20 years later.

In March 1992 NASA released a press interview claiming, "unexplained deviations in orbits of Uranus and Neptune points to a large outer solar system body "4 to 8" Earth masses, on a highly tilted orbit,  beyond 7 billion miles from the sun. In the past few decades, astronomers around the world have joined the search, looking for one more planet in our solar system. They named the elusive object, Planet X, meaning both unknown and10.

"Astronomers are so sure of the 10th planet they think there is nothing left to do but to name it." Ray T. Reynolds, NASA (NASA press release, 1992).

But we have to go back even earlier to try and understand just what NASA was looking for. Sixty years ago, on April 1, 1960, the National Aeronautics and Space Administration (NASA) launched TIROS-1, the world’s first successful meteorological satellite. It was a great success for the fledgeling NASA which had been formed in October 1958 after the former Soviet Union launched Sputnik 1, the first artificial satellite to be successfully placed in orbit around Earth on October 4, 1957.

Two months after the Russian Sputnik 1 was launched an event occurred on our Sun which left the science community at the time and even to this day baffled. The USSR launched Sputnik 1, their first artificial satellite in space on October 1957, followed by Explorer 1, on January 31, 1958, the first satellite launched by the United States. However, a month earlier, something happened on our Sun on the 24th and 25th of December 1957 which defies logic, defies physics and science even to this day when our Sun exploded with record-breaking sunspots over the Christmas period of 1957.

The period described above was solar cycle 19, the nineteenth solar cycle since 1755 when extensive recording of solar sunspot activity began. Solar cycle 19 lasted 10.5 years, beginning in April 1954 and ending in October 1964. The number of sunspots witnessed on the Sun during Christmas Eve and Christmas Day 1957 (503), alarmed scientists so much at the time, that an International Geophysical Year was declared at the peak of this solar cycle to bring the Russian and US scientists onto the same page after the cold-war silence. Curiously, President Eisenhower went on to authorise the opening of the National Aeronautics and Space Administration (NASA) in July 1958.

The Space Race Had Began. Two days after the United States announced its intention to launch an artificial satellite, on July 31, 1956, the Soviet Union announced its intention to do the same. Sputnik 1 was launched on October 4, 1957, (just two months before our Sun went ballistic,) beating the United States and stunning people all over the world. In 1958, during the Explorer 1 launch,  NASA first observed that changes in the solar orbit of the earth, along with alterations to the earth’s axial tilt, suggesting solar activity was responsible fluctuations in our planet's weather. In the year 2000, NASA did publish information on its Earth Observatory website about the Milankovitch Climate Theory, revealing that the planet is, in fact, changing due to extraneous factors that have absolutely nothing to do with human activity.

But this information has yet to go mainstream, see the report on Earth Observatory Coincidently, Milankovitch died in 1958. The maximum sunspot number observed during the solar cycle was 503, on Christmas Eve and Christmas  Day 1957 (the highest on record). Intense red aurora displays frightened people in Europe on 11 February 1958 and were visible from many US cities as far south as the 40th parallel. This geomagnetic storm caused a radio blackout over North America. Aurora displays were visible over New York on 13 November 1960 and 1 October 1961

15 years later in 1972, NASA launched the space probe Pioneer 10, its main goal was to search for a mysterious 10th planet in our Solar System or just beyond and the famous press release 20 years later claiming, "unexplained deviations in the orbits of Uranus and Neptune points to a large outer solar system body 4 to 8 Earth masses on a highly tilted orbit,  beyond 7 billion miles from the sun. Ray T. Reynolds, NASA (NASA press release, 1992).

The Kuiper belt occasionally called the Edgeworth–Kuiper belt, is a circumstellar disc in the outer Solar System, extending from the orbit of Neptune to approximately 50 AU from the Sun (1 astronomical unit, (AU) is the distance of the Earth to our Sun). It is similar to the asteroid belt but is far larger – 20 times as wide and 20–200 times as massive according to Wikipedia. Astronomers studying the Kuiper Belt have noticed some of the dwarf planets and other smaller, icy objects tend to follow orbits that cluster together and have huge elongated orbits and appears to be pulled by a large planet on the edge of our solar system away from the Sun. By analysing these orbits, NASA and the Caltech team, The California Institute of Technology predicted the possibility of a large, previously undiscovered planet which is probably hidden far beyond Pluto. They estimate the gravity of this potential planet might explain the unusual orbits of those Kuiper Belt objects. And of course the unexplained deviations in the orbits of Uranus and Neptune, however, the real story begins long before NASA and Caltech way back in time to 1781. William Herschel, a German astronomer built a groundbreaking telescope with a super clear lens which was state of the art for the time and with it, he stumbled on what he believed was a blurred star. On checking the blurred star the next day, he realised it had moved. Unwittingly he had found another planet in our solar system which he called “Planet X,” and was later named Uranus.

Thirty-nine years later, a French astronomer, Alexis Bouvard, discovered irregularities in the orbit of Uranus and reasoned another planet was beyond Uranus, causing its irregular orbit, however, in 1840 no one knew just where the other planet was? On September 23 1846, the planet Neptune was discovered. American astronomer, Percival Lowell realised Uranus and Neptune were not quite where they should be in their orbits around the Sun. Lowell decided another planet must be beyond Neptune which he then named, “Planet X.” Lowell, unfortunately, died in 1916, however,14 years later Planet X was officially discovered, (just where Lowell said it would be) and was named Pluto. Years later Pluto was devalued as being the 9th planet of our solar system, it was too small to be a planet and was thought to be a large object from the Kuiper belt beyond Neptune.

What is NASA's thoughts on Planet X?  (Back in 1992, Pluto was considered a planet, 13 years later it was declassified meaning Planet X would now have to be known as Planet 9).

The California Institute of Technology (Caltech) researchers have found mathematical evidence suggesting there may be a "Planet X" deep in the solar system. This hypothetical Neptune-sized planet orbits our Sun in a highly elongated orbit far beyond Pluto. The object, which the researchers have nicknamed "Planet Nine," could have a mass about 10 times that of Earth and orbit about 20 times farther from the Sun on average than Neptune. It may take between 10,000 and 20,000 Earth years to make one full orbit around the Sun, according to NASA.

Interestingly, there are around 4,000 large objects in the Kuiper belt, beyond the orbit of Neptune. Pluto was the first object to be discovered as coming from the Kuiper Belt. In 2003 astronomers discovered a large object which had a highly unusual orbit which takes an incredible 10,000 years to orbit the Sun, this large object was called Sedna, according to Dr Michael Brown from Caltech. He claims Sedna’s elongated orbit around the Sun never comes near any of our giant planets and appears to have “pulled away” from our solar system which is highly strange. “Something” had to have pulled Sedna away from the Solar System. After the discovery of Sedna, other objects were found in the Kuiper belt all with massive elongated orbits and all appear to have been “pulled” away from the Sun in one direction as if something is pulling them away from the Solar System.

After developing supercomputer models, Caltech plotted the orbits of other strange objects with the same result, the Caltech team believe they are certain, a large planet just outside our solar system is pulling these objects toward it. Caltech believes this rogue planet has a mass of around 6,000 times the size of Earth and 500 times further away from the Sun than our own planet with an eccentric orbit.

What caused the sun to go ballistic on Christmas Eve and Christmas day 1957 we will never know, however, the date is significant in many topics tearing the scientific world apart today such as the Milankovitch Climate Theory, which reveals our planet is, in fact, changing, (warming) due to extraneous factors that have absolutely nothing to do with human activity, while other scientists today claim our climate is warming due to human activity and our overuse of co2.

Other factors though, occurred around the late 50s early 60s which are truly astounding. For instance, graphs showing natural disasters suddenly spike and continue to rise, the same happens to major earthquakes as we have seen, tornadoes, volcano eruptions and yes the rise in global temperatures, all appear to happen around the same time the “Swinging’ Sixties”.