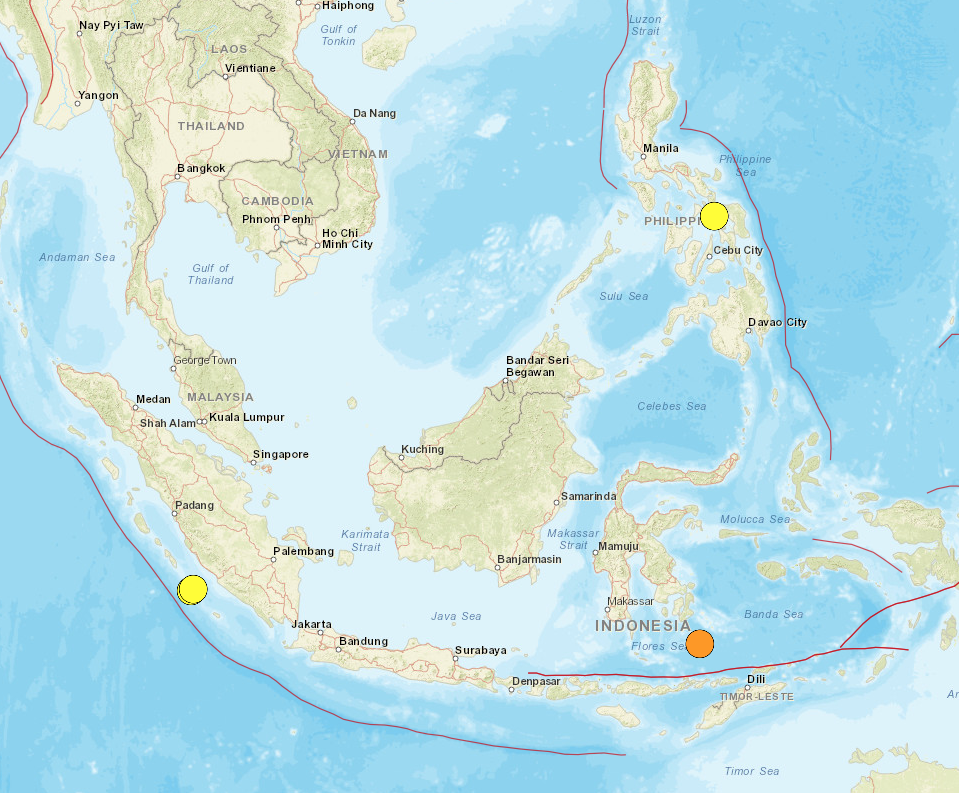 USGS Map showing the 4 major quakes in the last 4 days.
The Pacific Ring Of Fire continues to shake. A powerful M 6.9 - 220 km SSE of Katabu, Indonesia is the 4th major quakes (magnitude 6 or higher) to hit the Pacific Ring Of Fire in the last 4 days. The 650km deep quake which occurred in the Flores Sea is not thought to have caused a tsunami and there were no immediate reports of casualties or damage.
Today quake is the 9th major quake (magnitude 6 or higher) of August 2020 and brings the total to 78 major quakes this year to date. At the same date in 2019, 95 major quakes had been recorded and in 2018, 63 major quakes had been reported.
Also in the area Mount Sinabung in Sumatra, Indonesia is showing high levels of activity and is erupting near-constant ash emissions that rose 8,929 ft (2,721 m) above the summit and drifted into a north direction. The strong explosion occurred at 07:59 local time on Wednesday. The seismic station records 57 volcano-tectonic earthquakes and 4 continuous tremors. The warning bulletin states that ballistic impacts of volcanic bombs and pyroclastic flows could affect an area of about 3 km distance from the main crater and 5 km on the SE flank and 4 km on the NE flank. Source: Pusat Vulkanologi dan Mitigasi Bencana Geologi volcano activity update 20 August 2020.
The Dukono Volcano which is also located in Indonesia is erupting. Explosive activity continues. The Volcanic Ash Advisory Center (VAAC) Darwin warned about a volcanic ash plume that rose up to estimated 7000 ft (2100 m) altitude or flight level 070 and is moving at 5 kts in SE direction. Full story
Major Quakes 2020
Front Page Headlines
at August 21, 2020