Remember Australia? Fires so hot they are creating their own wind. Triple digit heatwave, power grid overloading and almost 150 Californians dying every day from Covid-19; Gov. Gavin Newsom; "If you are in denial about climate change, come to California."

On Aug. 19, 2020, NOAA’s GOES-West satellite captured the above GeoColor image loop of massive wildfire smoke plumes billowing from California and areas of the Rocky Mountains. To the north, a mid-latitude cyclone spins over the Gulf of Alaska while Hurricane Genevieve continues its path toward Baja California.
If you think you are having a bad week spare a thought for Californians. They are having to live through an almost unbearable heatwave, the highest temperature ever recorded here on Earth may have been beaten on the 16th of August when a temperature of 130F (54.4C) was recorded in Death Valley National Park, California on Sunday. On Wednesday millions of California residents were smothered by smoke-filled skies as dozens of wildfires raged out of control while suffering triple-digit temperatures. Because of the heat, the outdated power grid keeps overloading causing as many as two million Californians into darkness in the first rolling blackouts to hit the state since the 2001 energy crisis. To make matters worse they are continuing to fight the terrible coronavirus which is reportedly killing nearly 150 Californians a day.
Wildfires that blackened skies, took at least five lives and forced tens of thousands of people from their homes were blazing through California on Thursday, straining firefighting resources by the sheer vastness of the battle lines. Three major collections of fires - dozens in all - carved their way through the forest, canyon country and rural areas in the San Francisco Bay Area and central California. 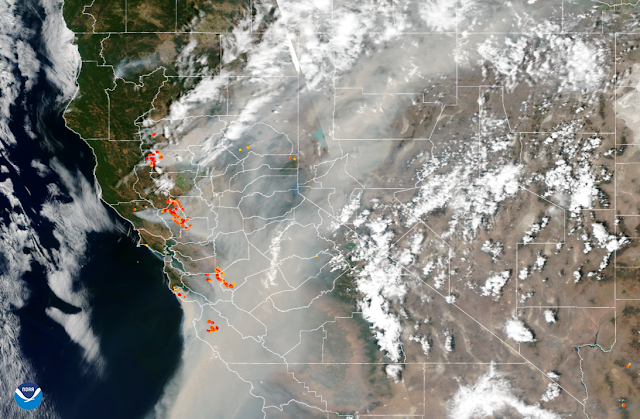 The VIIRS sensor onboard the NOAA-20 satellite captured this image of the smoke as it passed by the region on Aug. 19. The reddish points show the heat signature intensity of the fires. Red points are the hottest fires, followed by orange and yellow.
Tens of thousands of homes were threatened by flames driving through dense and bone-dry trees and brush. Many were sparked by lightning strikes from brief thunderstorms this week as a high-pressure area over the West brought a dangerous mix of triple-digit weather and monsoonal moisture pulled from the south. Some fires doubled in size in 24 hours, fire officials said. And while some evacuations were lifted in the town of Vacaville, between San Francisco and Sacramento, other areas increased their evacuation sizes.
The University of California, Santa Cruz was evacuated. A new fire burning near Yosemite also had prompted evacuations. Santa Cruz itself, a central coast city of 65,000, wasn't affected but Mayor Justin Cummings urged residents Thursday evening to be prepared to evacuate if necessary by gassing up and packing important documents, medicines and other belongings. "Prepare early so that you are ready to go at a moment's notice," Cummings wrote.
Although the temperatures were expected to ease slightly Friday, they were expected to be hot enough that firefighters couldn't count on cool evening weather to aid them. Erratic winds also could drive the fires unpredictably in multiple directions, state fire officials said. "There's so much heat in these fires that they create their own wind... and they may blow in any direction, and very erratically," said Daniel Berlant, an assistant deputy director with the state Department of Forestry and Fire Protection, also known as Cal Fire.
Winds gusting to 20 mph (32 kph) over ridge tops could challenge the overnight firefight in Santa Cruz and San Mateo counties, said the incident commander, Cal Fire Assistant Chief Billy See. "This country likes to burn at night, more so than during the day, and that's because of the wind patterns," he said. Nearly 50,000 people were ordered evacuated in those counties. The ferocity of the fires was astonishing so early in the fire season, which historically has seen the largest and deadliest blazes when Santa Ana winds begin to blow in the next two months.
More than 10,000 firefighters were on the front lines. Some 3,000 firefighters had arrived in the past 24 hours, along with hundreds of fire engines from neighbouring states, and National Guard troops that were staffing hand crews and flying helicopters, an official said. Some C-130 military aircraft also had been outfitted as air tankers. Gov. Gavin Newsom addressed the wildfires Thursday in a last-minute video recorded for the Democratic National Convention."If you are in denial about climate change, come to California," he said.
Wildfires 2020
Front Page
at August 21, 2020

Also interesting to know is that a covid death can be any death (at least in the US where the CDC gives explicit instructions on how to complete death certificates with covid as cause of death even if it was only 'assumed' to have been present), and that the more covid patients and deaths are recorded, the more money hospitals and states receive, and the more power and control governments can accumulate and maintain.