Iceland produces another earthquake swarm after almost a 1,000 quakes in just 36 hours occurred under the volcanic mountain Fagradalsfjall just a month after a similar swarm rocked the Askja volcano 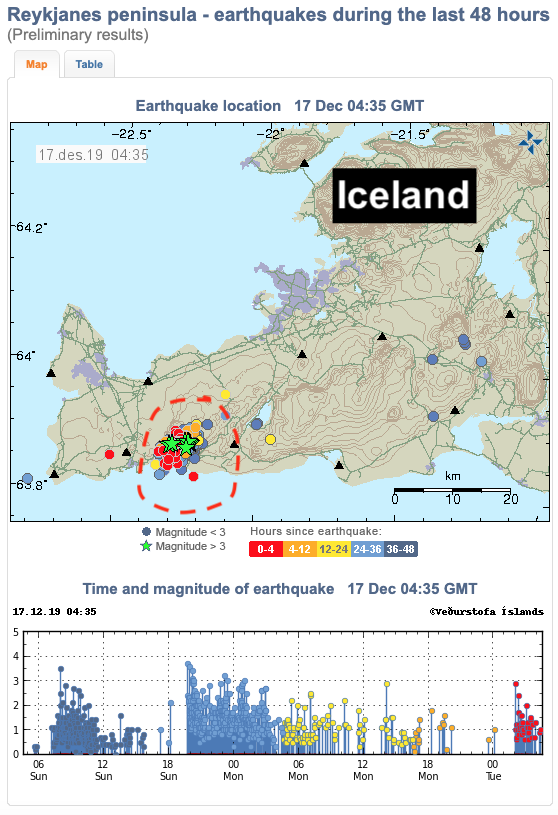 Iceland is in the news again as another earthquake swarm registered almost a 1,000 quakes in just 36 hours between Sunday and Monday.

Just last week Iceland suffered what was dubbed an "Ice Hurricane."
The violent winter storm dumped 10 ft, (3.4 metres) of snow across Iceland accompanied with 150-190 km/h gusts with gusts of 250 km/h.

The powerful earthquake swarm occurred under the volcanic mountain Fagradalsfjall in Iceland. Over 900 earthquakes were detected in less than 36 hours.

The strong earthquake swarm is ongoing at the Fagradalsfjall mountain on Reykjanes peninsula. The swarm started Sunday, (December 15th) around 8am. The strongest earthquake in the first burst was an M3.5 at around 5km depth. The mountain is actually of volcanic origin, with the last eruptions here being over 12.000 years ago. A second, larger burst of earthquakes followed around 12 hours later. This burst was stronger, with the strongest earthquake being an M3.7 at 7:48pm, that was followed by an M3.6 just 9 minutes later. So far, a total of 10 earthquakes above magnitude 3 have been listed. Over 900 earthquakes have been detected in the whole swarm by the monitoring. IMO (Iceland Met Office) has received felt reports from Grindavík, Keflavík, Reykjavík (capital of Iceland) area and Akranes. Severe Weather Europe A third swarm is now in progress.

Just last month, Iceland authorities were monitoring the Askja volcano 24/7 after a swarm of 1,000 earthquakes had been recorded at the caldera in less than a week. The earthquake swarm started the 7th of November just east of Askja volcano. Around 1000 earthquakes had been recorded in the area since the swarm started. The largest earthquake was M3.4 and occurred on the 9th of November. No volcanic tremor was detected in the area. The Askja volcano is a few hundred km further west than where the current swarm at the Reykjanes peninsula.

Askja was virtually unknown until the tremendous eruption which started on March 29, 1875. Especially in the eastern fjords of Iceland, the ashfall was heavy enough to poison the land and kill livestock. Ash or tephra from this eruption was wind-blown to Norway, Sweden, Germany and Poland. The eruption triggered a substantial wave of emigration from Iceland. Another less well-known eruption, called Askja-S, occurred in the early Holocene, ca 11,000 years ago. Tephra from this eruption has been found in south-east Sweden, Northern Ireland and north Norway and recently as far south as Romania, which makes it one of the most far-travelled Icelandic tephras. The last eruption of Askja was in 1961.A similar eruption would cause chaos for European Airlines, back in April 2010 tens of thousands of travellers were left stranded across Europe as a drifting ash cloud from the Eyjafjallajokull volcano spread rapidly south-east from Iceland and caused the biggest shutdown of the continent's airspace since 11 September 2001.
Major Quakes