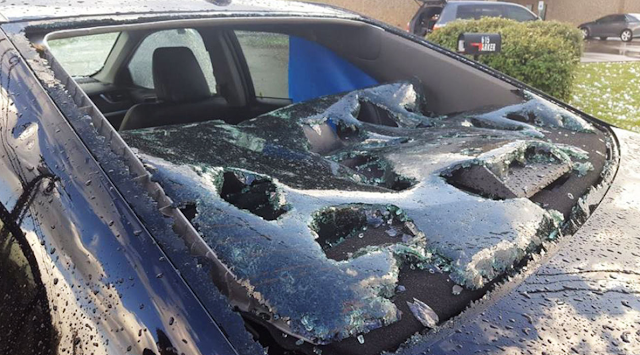 Insurers are bracing for a flood of claims after Sydney's "catastrophic" hailstorm yesterday, which saw many parts of the city pelted with hail up to 8 centimeters wide.
The Insurance Council of Australia (ICA) has declared the storm a catastrophe and said claims so far had been mostly about damage to motor vehicles, including smashed windscreens.
Residents have also been ringing their insurers about damage to tiled or metal roofs and flooding. ICA spokesman Campbell Fuller said the financial impact of the storms would be significant.
"It won't be known for some days or even several weeks," he said.
"Residents and businesses are prioritizing making their properties safe ... and they'll contact their insurers when they get to it."
The Bureau of Meteorology said the storms pelted a widespread area with large hailstones.
Many areas looked as though they had been blanketed by snow.
Dozens of flights at Sydney Airport are now delayed or canceled as a flow-on effect of the storm last night, and travelers have described the check-in process as "chaos".
A spokesman for the airport said there were delays at T1 (international) and T2 (domestic).
The delays at T2 are up to 60 minutes for some services and at T1, flights are running around 40 minutes behind.
The backlog of flights is largely due to the wild weather yesterday but also poor weather in Melbourne today, the spokesman said.
"If you're catching a flight out of Sydney today allow several hours because it's constipated as f**k," writer Benjamin Law tweeted.
Virgin Australia has advised passengers to allow 2.5 hours before their domestic flight as "it's incredibly busy".
Surfers at Bondi Beach had few options for shelter, and while many made a dash for the shore, some stuck it out in the water and used their boards for cover.
At Berowra, on the upper North Shore, there were reports of hail about 8 centimeters wide, while Cabramatta in the south-west and parts of Surry Hills received hail about half that size.
A State Emergency Service spokesperson said Berowra was one of the worst-hit areas, with "almost every second home" needing assistance.
"Giant hailstones, which is hail greater than 5 centimeters, are quite specifically driven in supercell thunderstorms," meteorologist Jordan Notara said.
"We do get them quite regularly over summer through NSW, but these storm cells redeveloped quite intensely over Sydney specifically."
The state's most highly populated area was right in the firing line, worsening the impact.
Mr Fuller said an "insurance catastrophe" was declared due to the extent of the damage, which was evident early in the storms.
"The declaration means insurers are prioritizing claims from the hailstorm and they're endeavoring to help customers as quickly as possible," he said.
It also means a taskforce has been set up specifically to liaise with emergency services and government bodies.
While the cost of the storms will not be known for some time, Mr Fuller said a catastrophe was declared when the damage bill was likely to be in the tens of millions of dollars or higher.