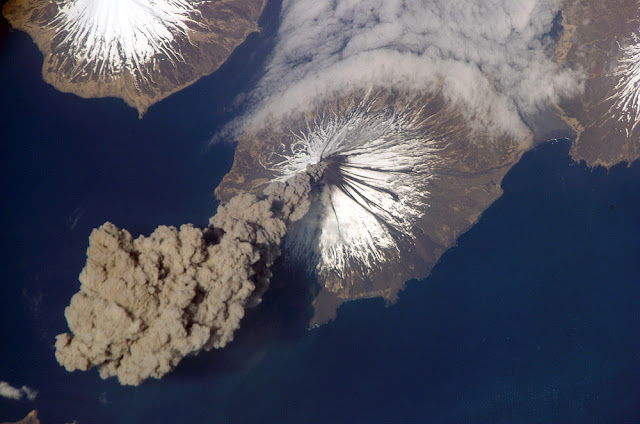 Ash plume arising from Mount Cleveland on May 23, 2006, as seen from the International Space Station.
The Alaska Volcano Observatory said Tuesday that a lava flow was observed at the Cleveland Volcano on the uninhabited Chuginadak Island in the Aleutian Chain.
A lava flow about 260-feet in diameter on the floor of the summit crater was observed in satellite data on Monday, the AVO reported.
"A possible steam emission was observed in satellite data at 0:48 UTC, June 26, 2018 (4:48 p.m., Monday, June 25, 2018) that may be related to the effusion of lava in the crater," the AVO wrote in their daily update.
The aviation colour code was raised to "orange" and the alert level raised to "watch", as the AVO says the presence of a lava flow over the active vent increases the possibility of an explosion over the coming days to weeks.
The satellite images over the past day were mostly cloudy and no other activity has been observed. The AVO says they're experiencing problems with data transmission from the volcano and seismic and infrared data are temporarily unavailable.
The Cleveland Volcano is monitored by only two seismic stations, limiting the AVO's ability to detect precursory unrest that may lead to an explosive eruption.
"Rapid detection of an ash-producing eruption may be possible using a combination of seismic, infrasound, lightning and satellite data," the AVO says.
Mount Cleveland is 159 miles southwest of Unalaska.
According to Oregon State University, the Cleveland Volcano produced the only known fatality from an Aleutian eruption, when a small group of soldiers was stationed on the island for an eruption in June of 1944.