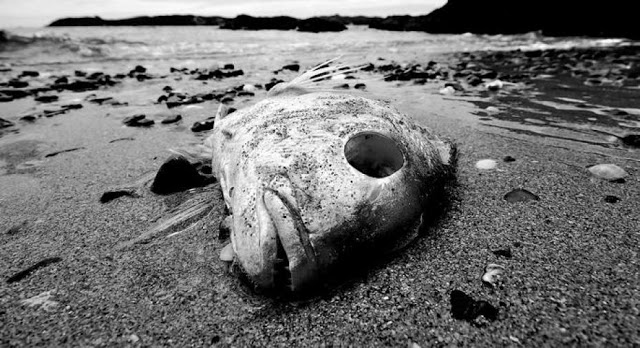 Photo theleft.co
Scientists estimate that thousands of dead seabirds are washing up along the coasts of western Alaska.
Common murres, an abundant North Pacific seabird, have been found dead on shores from Shishmaref to St. Lawrence Island since last month, KTUU-TV reported Wednesday.
A dead bird has been examined at the U.S. Fish and Wildlife Service's migratory bird office in Anchorage and more are being sent in to be tested, said Robb Kaler, a wildlife biologist for the service.
It is thought millions of the little birds have died since 2015 but the true number will never be known because the majority of birds are thought to die out at sea.
The new die-off follows a massive loss of common murres in 2015, 2016 and 2017 the biggest murre die-off on record in Alaska, and a precursor to near-total reproductive failures for murres in the Gulf of Alaska and Bering.
It also follows the deaths of thousands of puffins found last fall on St. Paul Island in the Pribilofs and, prior to that, mass deaths of murres and auklets along the U.S. West Coast.
In each death wave, starving birds have left emaciated carcasses, and each wave has been associated with unusually warm marine waters.

However, Alaskan and West coast fishermen have been complaining of the demise of fish along the West coast of the U.S. Canada and Mexico since 2012.
According to Hal Bernton of The Seattle Times, the Gulf of Alaska cod populations appear to have nose-dived, a collapse fishery scientists believe is linked to warm water temperatures known as “the blob” that peaked in 2015.
The 2017 trawl net survey found the lowest numbers of cod on record, more than 70 per cent lower than the survey found two years earlier.
The cod decline likely resulted from the blob, a huge influx of warm Pacific Ocean water that stretched — during its 2015 peak — from the Gulf of Alaska to California’s offshore waters.
Sardines, anchovies, have all but disappeared according to U.S. fishermen along with the demise of the Salmon industry along the West coast of Canada and Alaska.
The Bering event is the latest in an "unprecedented series of marine bird die-offs" over the last four years in waters from California to the Arctic, said Julia Parrish, executive director of the Coastal Observation and Seabird Survey Team, or COASST, managed by the University of Washington."The results come back pretty quickly.
Currently, they determined the cause of death appears to be due to emaciation, starvation," Kaler said. Scientists are examining what led to the birds' starvation and Kaler said there are likely multiple factors at the root of the problem.
"You've got birds that are starving, so we know why they're dying - they're dying of starvation," Kaler said.
"But the question is why are they not able to find food?
What's happening?"
Thousands of the birds were found dead along the Pacific coast following a massive die-off in 2015 and early 2016.
Scientists pinned the cause on warm ocean temperatures that affected the birds' food source.
The problem was exacerbated by vicious winter storms.
Another factor could be neurotoxin poisoning from algal blooms, which travel through the food chain, Kaler said.
The ocean temperatures could be causing the harmful algal blooms to flourish.

The problem is not confined to cod, all marine life has been declining along the western coast of America, Canada and even Mexico since 2011.
Biologists tracked increases in bird die-offs, whale strandings and other events such as toxic algae blooms.
In September 2017, the U.S. Fish and Wildlife Service released a new report claiming tens of thousands of kittiwakes, murres and auklets were washing ashore dead in Alaska for the third year in a row, the total number of deaths was incalculable because many many more birds are thought to have died off the coast and died at sea.
If tens of thousands of them are dying, it's because there's no fish out there, anywhere, over a very large area!
The deadly patch of warm water along the American West Coast called the ‘Pacific blob’, has also killed thousands of California sea lions.
Many starved as they struggled to find food in an unusually warm eastern Pacific.
Strange exotic tropical fish have been reported off the coast of Alaska.
An unprecedented die off which began in 2011 along the West coast of North America when billions of sea urchins and sea stars died suddenly in what was 'one of the most unusual and dramatic die-offs marine biologists have ever recorded.
In January this year, the U.S. Federal government issues a disaster declaration for Alaska's pink salmon fishery as the true amount of dead marine life began to hurt the fishing industry.
The collapse of Alaska's salmon fishing is not the only problem hitting the North-West Coast of North America in the last couple of years, the amount of marine and bird life dying in the area is astonishing, as the list below will prove.
According to a Yahoo Finance report last week, the United States imported more seafood last year than at any point in its history, and the nation's trade deficit in the sector is growing, federal data show. The U.S. imported more than 6 billion pounds of seafood valued at more than $21.5 billion in 2017, according to data from the National Oceanic and Atmospheric Administration, which oversees American fisheries. The country exported more than 3.6 billion pounds valued at about $6 billion. The widening gap comes at a time when Commerce Secretary Wilbur Ross, who heads the federal agency that includes NOAA, has identified reducing the deficit as a priority for the government. The U.S. is home to major commercial fisheries for species such as Pacific salmon, New England lobster and Alaska pollock, but it imports more than 90 per cent of the seafood the public consumes. Ross and others in U.S. fisheries are looking at new strategies to cut the deficit, including increasing the amount of aquaculture-based farming, said Jennie Lyons, a NOAA spokeswoman.