Volcano on Manam Island in Bogia, Madang Papua New Guinea erupted on Sunday forcing many to flee for safety 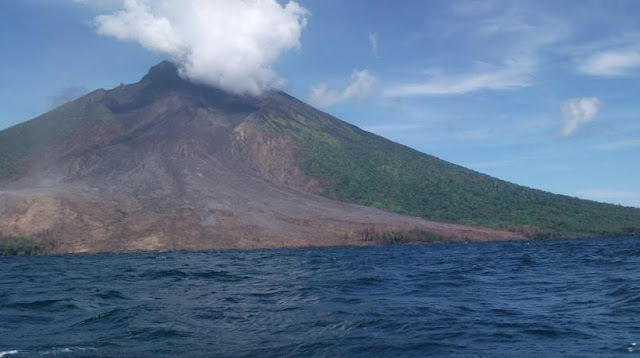 Stock photo
The volcano on Manam Island in Bogia, Madang in Papua New Guinea has, erupted on Sunday evening, forcing many who had moved back there fleeing for safety, the local newspaper reports.
Paul Maburau, the ward councillor for Dugulava village on the island, said they saw flames coming out at around 7pm when many villagers were preparing to have dinner.
He said fire was coming out of both craters of the volcano - the one between Bokure village and Kualang village, and the one between Dugulava and Warisi villages.
Maburau said more blasts came during the night and continued through yesterday.
"Every time there was a blast, the ground would shake," he said.
"The place is very dark with the smoke from the volcano.
"We are taking refuge where we think is safe."
He said some had left the island on the three available dinghies at Dugulava.
"Many of us left behind are now confused and scared of what will happen next," Maburau said.
The provincial disaster office confirmed receiving the report from the island and would make plans to assess the situation today and assist the people.
Manam Island is about 16km northeast of Bogia. Maburau said the people needed to be evacuated but fuel was the problem.
People from seven village in Giri confirmed seeing fire and smoke from Manam Island.
"The volcano is now giving off dust and soon all our gardens will be spoiled," Maburau said.
"This is my biggest fear because we will starve again."
It is one of Papua New Guinea's most active volcanoes.
A series of eruptions began at Manam in November and December 2004 It forced mass evacuations. A pyroclastic flow from the volcano on December 3, 1996, killed 13 people in the village of Budua.