The highly pathogenic H5N6 bird flu virus which has killed people in China recently is confirmed in South Korea: 62,000 birds to be culled 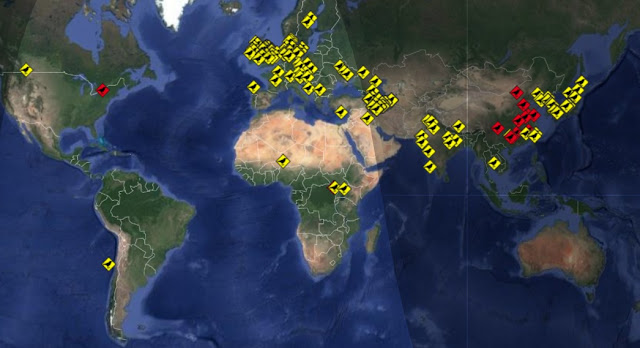 Click on RSOE Alert map to enlarge, red squares indicate humans infected
South Korea has confirmed the country's first outbreaks of the highly pathogenic H5N6 bird flu virus and has ramped up quarantine measures in response, agriculture ministry officials said on Friday.
The outbreaks occurred at two poultry farms in the central and southern parts of the country after the ministry reported last week that the H5N6 strain of the virus had been found in the faeces of migratory birds.
Cases of human infection from the H5N6 virus have previously been reported in places including China and Hong Kong, with the virus killing six people in China since April 2014, according to data from the South Korean ministry.
South Korea's ministry said just over 62,000 birds had been culled to prevent the spread of the virus and that it had a issued a "movement control order" within a radius of 10 kilometers (6.2 miles) around the farms.
There are no indications the virus has spread more widely, a ministry official said.