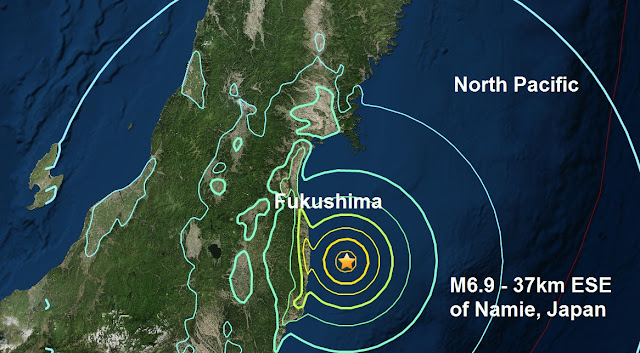 A magnitude 6.9 - 37km ESE of Namie, Japan, close to Fukushima has struck the east coast tonight'.
Its the second major quake to hit the Earth in 24 hours...
The quake was originally recorded as a mag 7.4, with a tsunami warning.
This evenings major quake was the 9th of this November and the 121st of 2016.
Earlier today The Big Wobble reported a magnitude 6.4 hitting Argentina, with more major quakes likely.

A magnitude 6.4 - 10km SSW of Zonda, hit Argentina last night, it came as a massive coronal hole on the Sun returned to face Earth raising concerns of further major quakes to hit in the coming days.

At the end of October, a hole in the sun's atmosphere lashed Earth's magnetic field with solar wind, sparking strong geomagnetic storms and almost a full week of Arctic auroras. It's back. The same "coronal hole" is turning toward Earth again, it has shrunk a little but it still covers a third of our Sun.