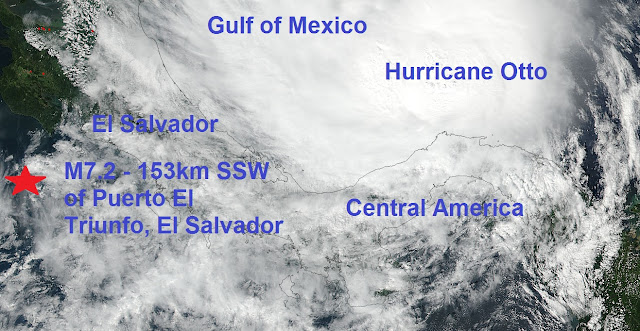 
It has been mentioned on The Big Wobble before, extreme weather can influence major quakes and it may have happened tonight.
A massive mag 7.2 earthquake has just struck El Salvador as hurricane Otto bears down on Central America, an extremely late hurricane to strike furthest south ever in the Caribbean!
A storm of Otto's expected strength has never made landfall so far south in the Caribbean, and there is no record of any hurricane striking Costa Rica,the Washington Post quoted.
With a major coronal hole facing the Earth, also thought to influence major quakes all bets are off.
A tsunami warning for this quake is possible…

Photo Spaceweather.com
A massive coronal hole on the Sun returned to face Earth raising concerns of further major quakes to hit in the coming days.

At the end of October, a hole in the sun's atmosphere lashed Earth's magnetic field with solar wind, sparking strong geomagnetic storms and almost a full week of Arctic auroras. It's back. The same "coronal hole" is turning toward Earth again, it has shrunk a little but it still covers a third of our Sun.
The West coast of the US is looking more and more vulnerable as its the only area of the "ring of fire" not to witness a major quake this year and the law of averages would suggest "the big one" has to come sooner or later.