Sunday, 4 December 2022 A century ago, their population was estimated at 1.5 million seals; in 2005, 104,000 remained, with an ongoing decline of 3–4% per year! Around 700 endangered seals have been found dead on Russia’s Caspian coast in the North Caucasus, local officials said Sunday! 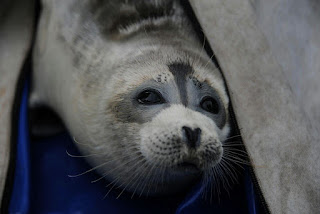 Around 700 endangered seals have been found dead on Russia’s Caspian coast in the North Caucasus, local officials said Sunday.

Caspian seals, the only mammals found in the Caspian Sea, have been classified as endangered on the International Union for Conservation of Nature (IUCN) red list since 2008.“The number of discovered animals may increase. The cause of death has yet to be determined,” the press service for the region’s fisheries agency said, according to Russian state media outlet TASS.

The seals washed up on the coast of Russia’s republic of Dagestan, along the Caspian Sea, the largest landlocked body of water in the world.

TASS said, “researchers had already started working on identifying the cause of the mammals’ deaths.”The news comes after more than 140 Caspian seals were found dead on Kazakh beaches of the Caspian Sea earlier this year, according to KASPIKA, an agency for the conservation of Caspian seals. 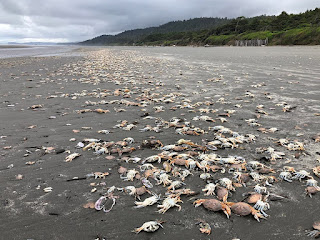 Just last month, TBW reported that the Alaska snow crab harvest had been cancelled for the first time ever after "billions" of crustaceans disappeared from the cold, treacherous waters of the Bering Sea in the last two years. The snow crab population shrank from around 8 billion in 2018 to 1 billion in 2021, according to Benjamin Daly, a researcher with the Alaska Department of Fish and Game. “ “So the shock and awe of many billions missing from the population are worth noting – and that includes all the females and babies.” Full story hereJust a month later, 1000 miles south, the Dungeness crab which is an iconic and valuable fishery resource to West Coast communities of Washington, NOAA reported, Hypoxia—dangerously low oxygen levels—is killing Dungeness crabs at an alarming rate.

Monday, 17 October 2022 Mystery after billions of Alaskan snow crabs have disappeared from the cold, waters of the Bering Sea: The Alaska snow crab season is cancelled for the first time ever as climate change and warm waters are blamed for the crabs' demise! 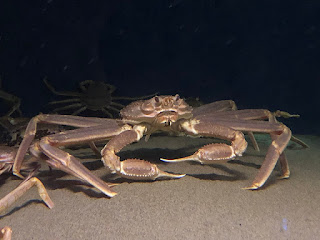 The Alaska snow crab harvest has been cancelled for the first time ever after billions of crustaceans have disappeared from the cold, treacherous waters of the Bering Sea in recent years. The Alaska Board of Fisheries and North Pacific Fishery Management Council announced last week that the population of snow crabs in the Bering Sea fell below the regulatory threshold to open up the fishery.

But the actual numbers behind that decision are shocking: The snow crab population shrank from around 8 billion in 2018 to 1 billion in 2021, according to Benjamin Daly, a researcher with the Alaska Department of Fish and Game. “Snow crab is by far the most abundant of all the Bering Sea crab species caught commercially,” Daly told CNN. “So the shock and awe of many billions missing from the population are worth noting – and that includes all the females and babies.”

Tuesday, 11 October 2022 Another 500 Pilot Whales Are Reported Stranded In The Southern Pacific Ocean Off The Coast Of Chatham Islands, New Zealand, Bringing The Total Of Pilot Whale deaths To Almost 800 In Just The Last Three Weeks In The Area! 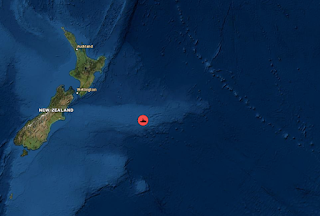 Hundreds of pilot whales have died after being stranded on the shores of New Zealand's remote Chatham Islands, New Zealand's Department of Conservation said on Saturday. Conservation officers said in a statement that they could not actively refloat whales stuck on the island because of "the risk of shark attack to both humans and the whales themselves." It is thought almost 500 pilot whales were stranded.

The Chatham Islands are about 785 kilometres (488 miles) east of New Zealand. Mass strandings are reasonably common on the islands, though marine biologists are puzzled by the phenomenon and are not sure what causes it. New Zealand has one of the world's highest rates of whale strandings, including in 2017, when over 400 whales died after stranding on Farewell Spit at the northern tip of South Island.

There is something very mysterious going on around the waters of Sevastopol in the Black Sea and the Russians have been going to incredible lengths to cover up this mystery since the Summer of 2017! Is GPS spoofing killing thousands of dolphins, birds, and fish? 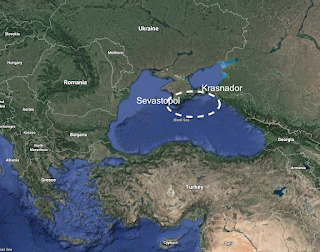 It's an area described by President Zelensky as 'hell.' and according to reports from Ukraine this weekend, tens of thousands of fish along with thousands of dolphins as well as marine fauna are washing up dead along the coastlines of the Black Sea and the Sea of Azov. Many more, fish and dolphins will have died and sunk to the bottom of the sea and will never be counted.  According to Odesa ecologist, Ivan Rusev tens of thousands of dolphins had died in the Black Sea three months after the Russian aggression from explosions and the impact of sonar. All the reports I have read indicate the deaths have been caused by the war in Ukraine, and indeed, the war may well be responsible for many of the marine deaths but . . . This area has a strange history of mass die-offs and other strange mysteries, including "GPS spoofing," involving Russia and Nato stretching back six years at the very least!

Wednesday, 21 September 2022 Signs And Wonders! Almost 250 pilot whales were stranded on Tasmania’s west coast: Incredibly in the same spot, 500 pilot whales have also been stranded two years ago to the very day! What is the reason and what are the odds? 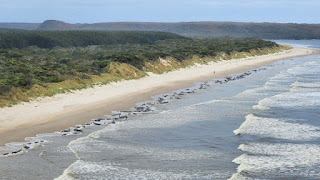