Another 500 Pilot Whales Are Reported Stranded In The Southern Pacific Ocean Off The Coast Of Chatham Islands, New Zealand, Bringing The Total Of Pilot Whale deaths To Almost 800 In Just The Last Three Weeks In The Area! 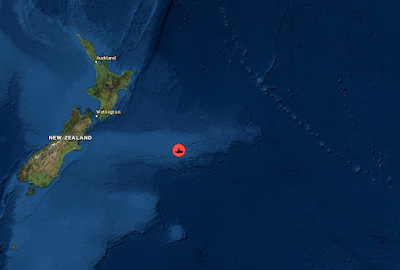 Hundreds of pilot whales have died after being stranded on the shores of New Zealand's remote Chatham Islands, New Zealand's Department of Conservation said on Saturday. Conservation officers said in a statement that they could not actively refloat whales stuck on the island because of "the risk of shark attack to both humans and the whales themselves." It is thought almost 500 pilot whales were stranded.

The Chatham Islands are about 785 kilometres (488 miles) east of New Zealand. Mass strandings are reasonably common on the islands, though marine biologists are puzzled by the phenomenon and are not sure what causes it. New Zealand has one of the world's highest rates of whale strandings, including in 2017, when over 400 whales died after stranding on Farewell Spit at the northern tip of South Island.

Around 1,000 whales died in mass strandings recorded back in 1918 on the Chatham Islands, making it one of the largest incidents ever, according to the Department of Conservation. The pilot whales, members of the dolphin family, were reported to be in distress on the island on Friday, the department said. "The Chatham Islands is a challenging spot for stranding response, known for great white sharks, remote beaches and a resident population of fewer than 800 people," said Project Jonah, an animal rescue charity group based in New Zealand.

According to the conservation department, some of the whales that survived were euthanized or humanely put down to prevent any suffering. Local people were also present to lend support. "All the stranded pilot whales are now deceased, and their bodies will be left to decompose naturally on site," the department said.

Two weeks ago, almost 250 stranded whales died on a beach on the west coast of Tasmania, Australia, as well.

What is causing the whales to beach themselves?

In late September 2022, about 230 whales were stranded on Tasmania’s west coast, just days after 14 sperm whales were found beached on an island nearby. The pod, which is stranded on Ocean Beach, were pilot whales.

Incredibly, a similar event happened in the same spot two years ago to the day.  The whale stranding on 21 September 2020, along the Tasmanian coast was the largest recorded in the state's history, authorities claimed almost 500 pilot whales were stranded. On September 21 2022, two years later to the day almost 250 pilot whales became stranded at exactly the same spot, why, what are the odds?

It is a theory The Big Wobble has been banding around for many years now, Solar storms may trigger whale strandings as well as dolphins, birds and bees and other animals who rely upon our magnetic field to navigate. A new study by the International Journal of Astrobiology appears to agree with The Big Wobble, releasing a report claiming; "Solar storms may trigger sperm whale strandings: explanation approaches for multiple strandings in the North Sea in 2016." The report by the International Journal of Astrobiology claims large solar storms, may have played a role in the strandings of 29 sperm whales in the North Sea early in 2016. The study says these geomagnetic disruptions may have confused the whales' ability to navigate, diverting them into the shallow waters. Trapped and lost, the whales died on European beaches, attempting to escape.
The International Journal of Astrobiology claims large solar storms, may have played a role. Every year an untold number of whales and dolphins wash up on beaches around the world and die, baffling experts. Birds and even bees are also known to show up dead hundreds of miles away from where they should be.
Domestic animals and people are also known to be affected by solar storms. The Big Wobble has received reports from Alaska from friends who suffer from migraines and other side effects, such as seizures, when Solar storms hit the earth's magnetosphere. They have also noted that dogs are having seizures at the same time as people are. Jenna White and Bill Laughing-Bear have written a report for The Clarion Peninsula: Voices of the Peninsula: A connection between planetary alignment, solar activity, and TBI (Traumatic Brain Injury) explaining space weather caused people with TBI to suffer "Bad Brain Days," some ending up with seizures and others taken to the hospital.
Surely with all the technology and data available to the experts, it is time to delve deeper into space weather and the effects it has on Earth, it has long been thought by some experts that not only do Coronal holes and CMEs affect our species here on Earth but they also influence major quakes and volcanic activity.

Meanwhile, the bodies of 13 Southern right whales have been found in Golfo Nuevo, in the waters off Argentina’s southern Atlantic coast. Scientists are waiting for the results of autopsies to determine what caused the deaths, but say regardless they are cause for concern.