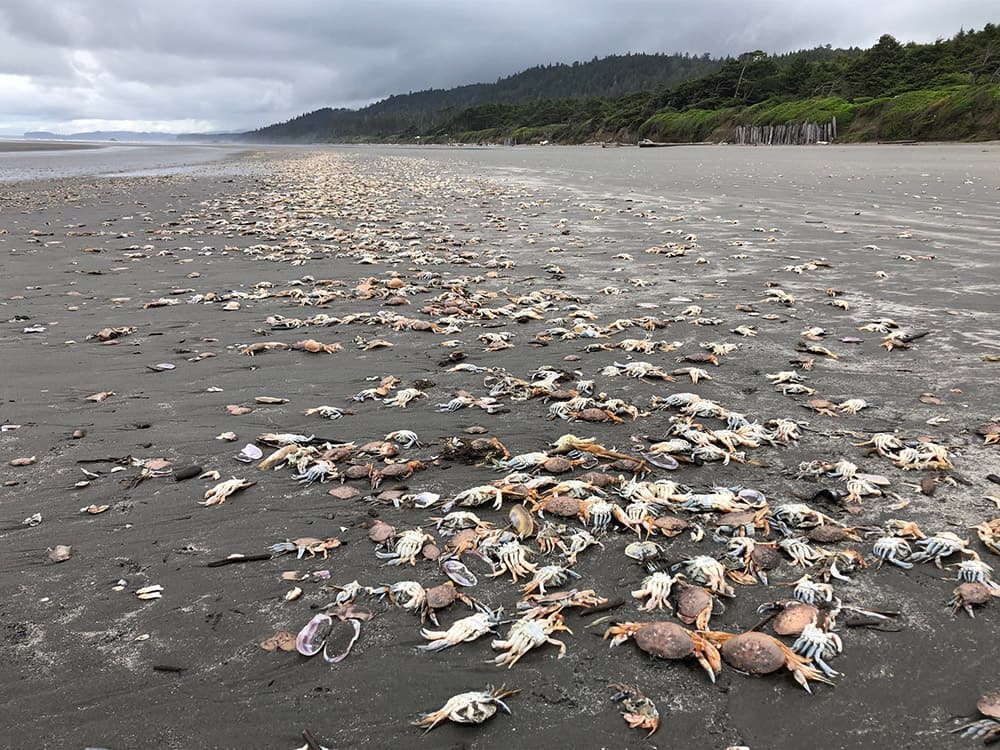 Hundreds of thousands of dead crabs scattered over a beach: Massive die-offs of Dungeness crabs have been documented off the Pacific Northwest Coast. Once dead, the aquatic crabs often wash up on beaches, such as the ones photographed on Kalaloch Beach on June 14, 2022. Photo: Jenny Waddell/NOAA. (Even more dead crabs remain on the seabed)
Just last month, TBW reported that the Alaska snow crab harvest had been cancelled for the first time ever after "billions" of crustaceans disappeared from the cold, treacherous waters of the Bering Sea in the last two years. The snow crab population shrank from around 8 billion in 2018 to 1 billion in 2021, according to Benjamin Daly, a researcher with the Alaska Department of Fish and Game. “ “So the shock and awe of many billions missing from the population are worth noting – and that includes all the females and babies.” Full story hereJust a month later, 1000 miles south, the Dungeness crab which is an iconic and valuable fishery resource to West Coast communities of Washington, NOAA reported, Hypoxia—dangerously low oxygen levels—is killing Dungeness crabs at an alarming rate.
Off the coast of Oregon and Washington, tribal, commercial, and recreational fishers pull up crab pots, expecting a haul of Dungeness crabs. Too often lately, what they find are pots filled with dead crabs, suffocated from a lack of oxygen near the seafloor.  Marine animals don’t breathe air, but they still need oxygen, which they absorb from the water. If sufficient oxygen is missing from the water column, the animals may perish.
In addition, blooms of harmful algae have led to the closure of entire Dungeness crab fisheries on the West Coast in past years. Harmful algal blooms are the rapid growth of algae that can produce toxins dangerous to animals and habitats, with potential risk to humans who eat contaminated shellfish.
Multiple Stressors Hypoxia and harmful algal blooms are considered stressors to the health of Dungeness crabs. Other stressors include ocean acidification, rising ocean temperatures, and marine heat waves. Each of these stressors is known to harm marine species and ecosystems independently, but scientists are only beginning to unravel the ways in which environmental stressors may interact, and whether there may be unprecedented consequences.
Climate change is already making existing marine environmental stressors worse through changes to temperature, precipitation, seasonal cycles, and ocean chemistry. These changes impact ocean processes and can increase the occurrence, severity, and duration of stressor events. Understanding how multiple stressors may interact and cause cascading impacts on a wide range of marine species and habitats is critical for marine resource management, especially within defined marine areas with fixed boundaries, such as national marine sanctuaries and tribal “usual and accustomed” areas. NOAA
xx
Home
Animal Die-Offs 2022
at November 08, 2022