Mystery after billions of Alaskan snow crab have disappeared from the cold, waters of the Bering Sea: The Alaska snow crab season is canceled for the first time ever as climate change and warm waters are blamed for the crabs demise! 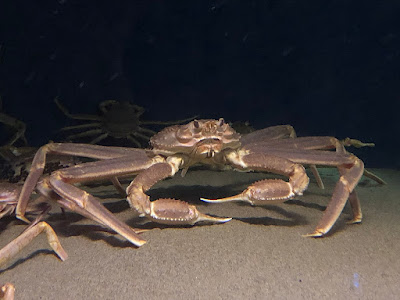 The Alaska snow crab harvest has been cancelled for the first time ever after billions of crustaceans have disappeared from the cold, treacherous waters of the Bering Sea in recent years. The Alaska Board of Fisheries and North Pacific Fishery Management Council announced last week that the population of snow crabs in the Bering Sea fell below the regulatory threshold to open up the fishery.

But the actual numbers behind that decision are shocking: The snow crab population shrank from around 8 billion in 2018 to 1 billion in 2021, according to Benjamin Daly, a researcher with the Alaska Department of Fish and Game. “Snow crab is by far the most abundant of all the Bering Sea crab species caught commercially,” Daly told CNN. “So the shock and awe of many billions missing from the population are worth noting – and that includes all the females and babies.”

The agencies announced that the Bristol Bay red king crab harvest will also be closed for the second year in a row. Officials cited overfishing as their rationale for cancelling the seasons. Mark Stichert, the groundfish and shellfish fisheries management coordinator with the state’s fish and game department, said that more crabs were being fished out of the oceans than could be naturally replaced. “So there were more removals from the population than there were inputs,” Stichert explained at Thursday’s meeting.

Between the surveys conducted in 2021 and 2022, he said, mature male snow crabs declined about 40%, with an estimated 45 million pounds left in the entire Bering Sea. “It’s a scary number, just to be clear,” Stichert said. But calling the Bering Sea crab population “overfished” – a technical definition that triggers conservation measures – says nothing about the cause of its collapse.

“We call it overfishing because of the size level,” Michael Litzow, the Kodiak lab director for NOAA Fisheries, told CNN. “But it wasn’t overfishing that caused the collapse, that much is clear.”

Litzow says human-caused climate change is a significant factor in the crabs’ alarming disappearance. Snow crabs are cold-water species and found overwhelmingly in areas where water temperatures are below 2 degrees Celsius, Litzow says. As oceans warm and sea ice disappears, the ocean around Alaska becomes inhospitable for the species. “There have been a number of attribution studies that have looked at specific temperatures in the Bering Sea or the Bering Sea ice cover in 2018, and in those attribution studies, they’ve concluded that those temperatures and low-ice conditions in the Bering sea are a consequence of global warming,” Litzow said.

Temperatures around the Arctic have warmed four times faster than the rest of the planet, scientists have reported. Climate change has triggered a rapid loss in sea ice in the Arctic region, particularly in Alaska’s Bering Sea, which in turn has amplified global warming. “Closing the fisheries due to low abundance and continuing research are the primary efforts to restore the populations at this point,” Ethan Nichols, an assistant area management biologist with the Alaska Department of Fish and Game, told CNN.

Stichert also said that there might be some “optimism for the future” as a few, small juvenile snow crabs are starting to appear in the system. But it could be at least three to four more years before they hit maturity and contribute to the regrowth of the population. “It is a glimmer of optimism,” Litzow said. “That’s better than not seeing them, for sure. We get a little bit warmer every year and that variability is higher in Arctic ecosystems and high latitude ecosystems, and so if we can get a cooler period that would be good news for snow crab.”

This is the long-term effects of the nuclear waste that Japan has been midnight dumping into the Pacific. There were millions of gallons piled up after the major earthquake that hit Fukushima. Bible being full filled.

Yes, I'm sure they have been tested for caesium-134, the fingerprint of Fukushima. I'm not sure we will ever be told the outcome.