Monster Storms! Alaska's Aleutian Islands hit with another "Bomb Cycle" Hurricane winds creating chaos from North Dakota to Kansas with another mammoth storm system developing in the North-East of the US bringing with it heavy snow affecting millions as North Dakota smashes heat record

The GOES-West satellite captured this stunning GeoColor imagery of a strengthening mid-latitude cyclone near the Aleutian Islands as it approached the Gulf of Alaska. This low-pressure system reached a low of 961 mbar with wind speeds of 74 mph and wave heights in excess of 40 feet, according to the National Weather Service Ocean Prediction Center. Alaska is set for another monster "Bomb Cycle" storm, the 2nd in just 15 days of 2021 as the US and Canada are battered by Hurricane-force winds yesterday and Thursday. 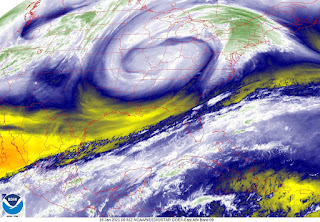 Credit NOAA
The powerful winds are set to push into the South-East this weekend bringing with another mammoth storm system developing in the North-East of the US bringing with it heavy snow affecting millions.
As the storm strengthens through Friday night, a swath of heavy snow will develop from New York into northern New England and southern Quebec. For the south of this corridor, heavy to locally very heavy rain is forecast, including the cities of Washington, D.C., Baltimore, and Boston on Saturday.
This Friday evening, a winter storm has grown very large, dominating the eastern half of the United States, centred above the state of Illinois. A frontal system is extending across the Great Lakes, with the cold front moving into the Mid-Atlantic Region. Its large core is pushing a very cold air mass towards the Southeast. 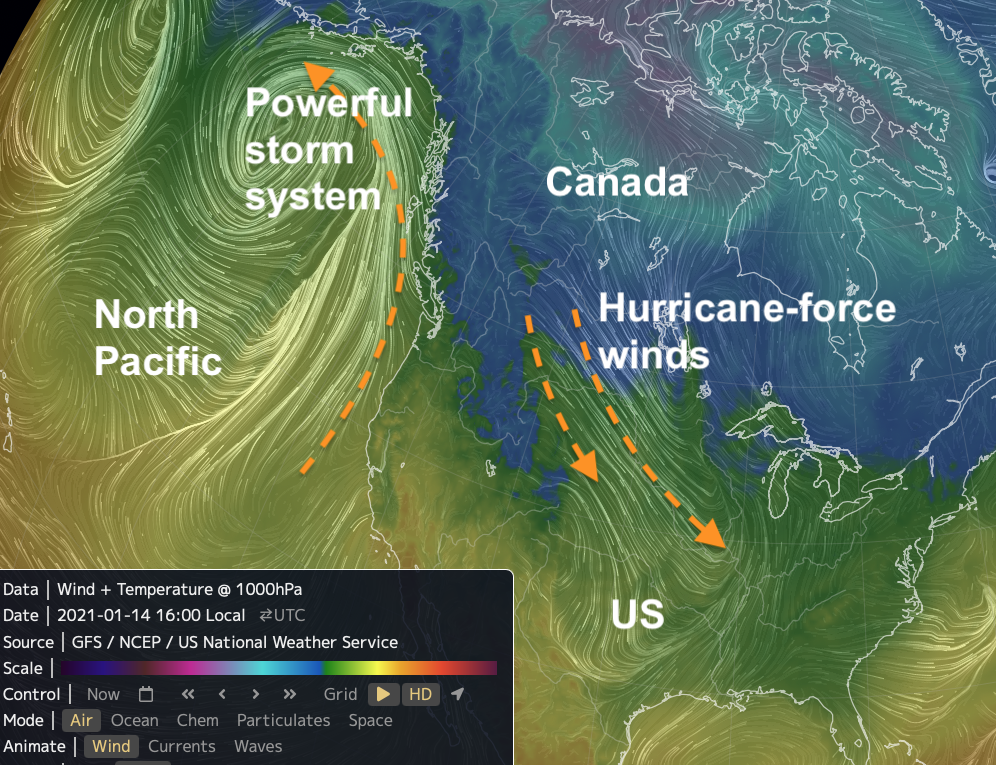 Thursday, 14 January 2021 "Unlike anything they're accustomed to seeing!" An intense winter storm is rapidly developing over southern Canada, forecast to move into the Midwest of the United States and reach the Southeast states by Friday with another waiting in the wings and set to follow

A semitrailer was blown over on Interstate 94 near Sterling; there was no immediate word on any injuries. The state Highway Patrol urged motorists to use caution and reminded drivers of high-profile vehicles that state and federal law restricts their movement when weather conditions might cause them to lose control. National Weather Service reports detailed other damage throughout western and central North Dakota. A mobile home at the Fort Union Trading Post National Historic Site in Williams County was flipped upside down. A cafe roof was blown off in the Renville County town of Mohall. Metal siding was blown off a building in the Mountrail County town of Stanley. A gas pump was blown over in New England, and a newly constructed building in Mercer County was knocked down. Tree and roof damage was reported throughout the region.

Gusts also toppled the wind turbine that has helped power the main building of the Nueta Hidatsa Sahnish College in New Town for the past five years. President Twyla Baker lives about 250 yards from the structure, and the wind noise kept her awake at times during the night. "It sounded like a helicopter was trying to land in my parking spot over and over again," she said. Around 2:30 a.m. Thursday, she heard a crash but couldn't see what had happened due to blowing snow outside her window. "I assume one of the guy wires snapped," she said. Later that morning, she found the turbine on the ground, its blades shattered and a nearby fence damaged during the collapse. The turbine had stood about 60 feet tall, smaller than a utility-scale tower used in wind farms across the state. The building it helped power is connected to other electricity sources, and the facility did not lose power. Baker hopes to rebuild the turbine. Renewable power is important to the campus, which offers a degree program in sustainable energy technology, she said.

Wind and warmth
The weather service issued a high wind warning for essentially the western two-thirds of North Dakota, with a winter weather advisory in the east, where up to 4 inches of snow could accumulate. The chance of snow in the Bismarck-Mandan region was low, but winds gusting to 45 mph were forecast into Friday morning. The powerful winds were being caused by a great difference in barometric pressure between a storm system moving along the U.S.-Canada border and another system over the Southwest, according to AccuWeather Senior Meteorologist Alex Sosnowski. The high winds followed two days of record heat. Minot, Dickinson and Jamestown set or tied all-time highs for the date on Wednesday, according to the National Weather Service. Bismarck on Tuesday hit 52 degrees, breaking the city's record of 50 set on Jan. 12, 1987. The recent warmth is due to a weather pattern that drew up air from the south and southwest, according to National Weather Service Meteorologist Alex Edwards.

The lack of snow is another factor, as the dry ground has less capacity to absorb heat, which affects air temperature. High temps in Bismarck-Mandan are expected to sink into the 30s for the weekend as the cold front moves through. The unseasonably warm weather has led to rapidly changing ice conditions on some bodies of water in the state, and the federal Bureau of Reclamation is advising the public to take precautions when recreating on rivers and lakes. An all-terrain vehicle and trailer broke through the ice at New Johns Lake northeast of Bismarck this past weekend, and the bureau saw two other similar incidents in South Dakota. "No one was injured, thankfully," said Patience Mosbrucker, spokeswoman for the bureau's Dakotas Area Office. Colder weather is on the way, with waves of arctic air expected to move south from Canada. AccuWeather's long-range outlook is for daily temperatures in the Northern Plains to average 10-20 degrees below normal from Jan. 24-28, with the frigid air sticking around the first couple weeks of February.
Extreme Weather 2021
Front Page
at January 16, 2021