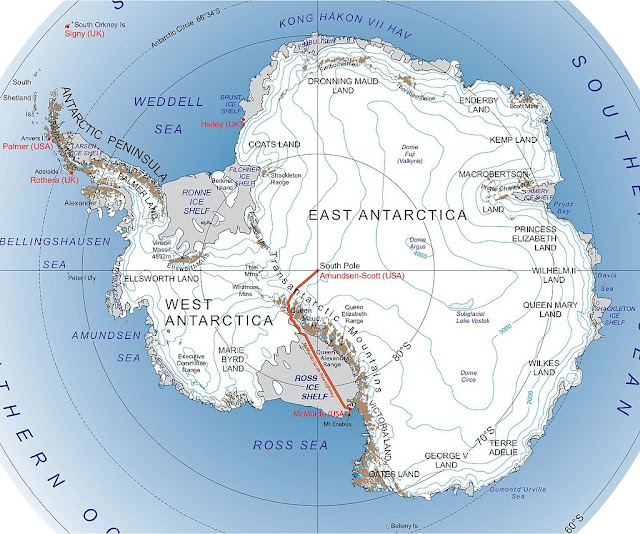 Credit Wikipedia
Unusual seismic activity in the Antarctic Peninsula Bransfield Strait Seismicity Report in November 2020 reported by the University of Chile causes concern among experts after more than 30,000 have been registered in the Bransfield Strait since August 2020. The Antarctic is characteristically seismically stable, until recently.
Other problems are beginning to occur in what is considered the worlds most pristine areas.
Also in November, a giant iceberg the size of the U.S. state of Delaware was reported to be floating toward the sub-Antarctic island of South Georgia, raising fears it could indirectly endanger young wildlife. The British Antarctic Survey is concerned the iceberg may run aground near the island, preventing land-based marine predators from reaching food supplies and returning to their offspring. Last week that scenario happened when a large piece of the iceberg broke off when the giant iceberg ran aground.

The giant iceberg, named A68, has been floating north since it broke off from the Larsen C ice shelf in July 2017, the Antarctic Survey said. South Georgia, located in the southern Atlantic Ocean, is a British overseas territory. Full Story

In 2018, the British Antarctic Survey (BAS) reported that kilometres beneath the ice of Antarctica, a radioactive heat source is slowly melting it from underneath. Researchers flew planes over the ice using radar to "see" three kilometres beneath the ice, where the hot material seems to be slowly melting the ice. The researchers believe the heat source is radioactive rocks and hot water from inside Earth's crust. Full Story

Again in 2018, An iceberg about five times the size of Manhattan broke off the Pine Island Glacier in West Antarctica, an ominous sign of the continued retreat of this fast-flowing mass of ice. It was reported to be the 6th largest-ever iceberg to break off the Antarctic. Full Story

“The declines that we’ve seen are definitely dramatic,” said Steve Forrest, a conservation biologist who joined a team of scientists from the two U.S. universities of Stony Brook and Northeastern on an Antarctic expedition that has just ended. “Something is happening to the fundamental building blocks of the food chain here. We’ve got less food abundance that’s driving these populations down lower and lower over time and the question is, is that going to continue?” Full Story
Controversially, in 2016 proof of the left’s agenda on Global warming as media giants the BBC, (known for having a thinly veiled a left-wing agenda) claimed: “massive Ice loss spreading up Antarctic glaciers!” When actually three weeks earlier, NASA reported the Antarctic has been gaining 112 to 82 billion tons of ice a year since 1992? They, the BBC, claimed, the scale and pace of change now taking place in West Antarctica are captured in a new, long-term satellite record. Scientists have combined nearly a quarter of a century of observations to show how the region's great glaciers are losing height by up to 7 meters per year, more on this later.
Their unlikely story came just three weeks after NASA claimed the Antarctic ice sheet showed a net gain of 112 billion tons of ice a year from 1992 to 2001, slowing to 82 billion tons of ice per year between 2003 and 2008. The new NASA study claimed that an increase in Antarctic snow accumulation that began 10,000 years ago is currently adding enough ice to the continent to outweigh the increased losses from its thinning glaciers. The research challenges the conclusions of other studies, including the Intergovernmental Panel on Climate Change’s (IPCC) 2013 report, which says that Antarctica is overall losing land ice. According to the new analysis of satellite data, the Antarctic ice sheet showed a net gain of 112 billion tons of ice a year from 1992 to 2001. That net gain slowed to 82 billion tons of ice per year between 2003 and 2008. That is 112 to 82 billion tons a year GAIN NOT LOSS. Full story here
Earlier this year, Antarctic continent posted a record temperature reading of 18.3°C
bringing fresh fears of accelerating damage to the planet’s ice sheets and sea-level rise have been fuelled by confirmation from the UN’s weather agency that the Antarctic likely saw a new temperature record of more than 18°C. Speaking to journalists in Geneva, spokesperson Clare Nullis from the World Meteorological Organization (WMO), said that the record reading taken in the north of the continent would be considered unusual, even during the current warmer summer months.The Argentine research base, which is called Esperanza, is on the northern tip of the Antarctic peninsula; it set a new record temperature yesterday: 18.3°C, which is not a figure you would normally associate with Antarctica even in the summertime. This beat the former record of 17.5°C, which was set back in 2015.” Experts at WMO will now verify whether the temperature extreme is a new record for the Antarctic continent, which is defined as the main continental landmass. It should not be confused with the Antarctic region, which is everywhere south of 60 degrees latitude, and where a record temperature of 19.8C was recorded on Signy Island in January 1982. Full Story