Things ain't adding up! The Great Reset Con! UK figures??? Only 13% of hospital beds were occupied by patients with Covid-19 this week: The number of hospital beds currently occupied in England is lower than last years average: November the 8th, the number of occupied hospital critical beds across the British Isles was actually lower than the 5-year average from 2015 to 2019. 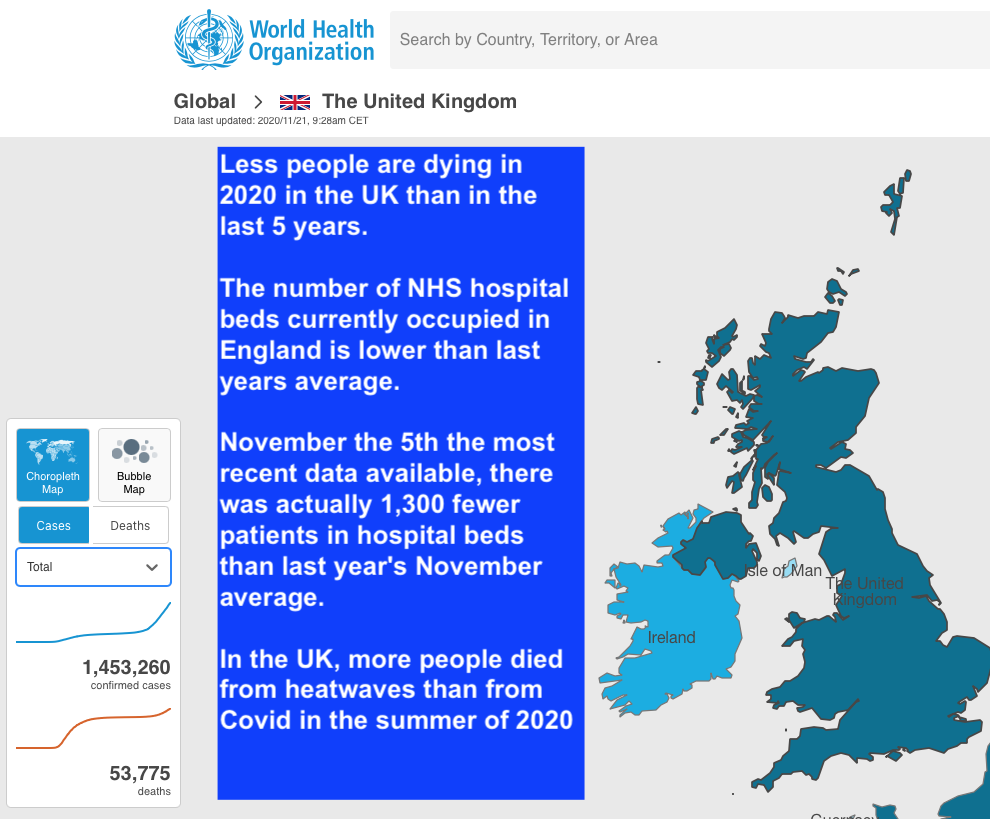 As the world approaches 60 million covid-19 cases and 1.5 million deaths I myself have some underlying doubts as to just what is really going on out there. Strange stories are circulating, things ain't adding up, statistics are not backing up the so-called facts. For instance, my 90-year-old father, who is very sick and in the hospital caught covid last week. The most fragile, weak and immunity compromised man you could possibly think of didn't have one symptom of this "killer" disease he was asymptomatic. His 90-year-old wife with heart disease came down with the virus and although poorly she was never in any danger.

Elon Musk tested positive and negative twice in one day last week? Despite all the fearmongering the facts are not staking up with the stats, in the UK at least. Today a report in the Daily Mail shows the incredible discrepancies we are being fed regarding the covid crisis.

In a July report commissioned by Chief Scientific Adviser Sir Patrick Vallance, scientists estimated that there could be 119,000 deaths in the UK if a second spike coincided with a peak of winter flu. Yesterday, that figure stood at 54,286 – less than half that.

In mid-September, Sir Patrick made the terrifying claim that the UK could see 50,000 new coronavirus cases a day by mid-October unless more draconian restrictions were introduced. Yet we have never got near that figure.

We keep on hearing of hospitals not coping with dying patients lying on beds in corridors. Last month UK government experts published a chart which suggested hospitals were severely under strain and at breaking point. According to the Daily Mail, only 13% of the UK's hospital beds were actually occupied by patients with Covid-19 this week.

According to the Mail, on November the 5th the most recent data available, there was actually 1,300 fewer patients in hospital beds than last year's November average.

Hey Gary, sadly the whole world is being conditioned to obey the leaders of this world. All us are under the confusion & lies portrayed to us by our so-called elected politicians & not elected people behind the scenes. I urge all your readers to ask God for clarity & wisdom, we all need the Holy Spirit in our heart & Jesus Christ as our savior. Amen, God bless us all.

You're gonna have to get a more reliable source than the Daily Mail. It is well known that the Nazi-loving Daily Fail would love to see the NHS fail and become totally privatised, so reporting an "under-occupancy" of beds is yet another stick to flail public health care with "Look it's inefficient" and all that mallarky.

Remember the main aim of the UK government, backed by the mainstream media, is to switch our health care system to the same as the one in the US - a source of immense profits for a small minority of people, whilst relying on their being lots of sick people with money to pillage. The words health and care are an oxymoron when added together by our government. They aren't interested in your health and they certainly don't care. Like typical disaster capitalists they are exploiting the Covid19 situation to make it a crisis to profit from and to further their neo-liberal assault on democracy.

Wrong again Sultanbev, stats come from The Public Health England/Cambridge, led by Chief Medical Officer Chris Whitty, amongst other official number-crunching officials working for the government. Do you ever read the post before printing your flabby, thinly-veiled, left-wing garbage? Do us all a favour and go troll another site and leave this one alone. TBW is apolitical and I'm sure the readers can do without your hate spreading socialist drivel.

Lots of people are postponing elective procedures to avoid hospitals altogether. This explains a lot. Deaths among elderly could be down because we are all sheltering in our homes, avoiding flu, colds, accidents, etc.

As long as we have criminals in CDC and Bill Gates running around , Corona virus will never go away !

Before I comment.....my background is 40 years clinical experience as an RN with an advanced degree who worked with the population that has multiple serious and chronic illnesses. And, politics be damn damned! My only interest is accurate, factual informationthat has not been bastardized by politics and money, or any globalists agenda. I spend all my free time combing the research for data, and I consider all critiques levied against any and all scientific studies. I do, however, "have a dog in this fight", as 57 years ago today my baby sister died as direct result of the oral polio vaccine, per the University of Minnesota, USA. As a practitioner I refused to accept as truth the information given to practitioners and the public because I was, at that time readily aware of the horrific influence of monied interests and governement agendas in the arenas of research and healthcare. I am a political atheist and a dogged chaser of accurate and honest research and data.

Each one of you who have already commented has a PIECE of the truth.
If we ever hope to find our way out of this mess we need to STOP FIGHTING AMONGST OURSELVES and begin to listen and cooperate. We will never reach a solution to what we face until and unless we all become collaborators instead of enemies. There are many liars in every facet of public, civic arenas, including government and science. I worked in central governement for an entire decade, and I can say with absolute certainty that any information you read or hear from any government is highly altered from the original facts and data......that is the nature of the beast. As well, all research is funded and monitored and controlled by someone or some agency etc. It also can be grossly manipulated to present the acceptable narrative. I conducted research. All research uses statistical analyses to look for results, and then conclusions are made. You can GROSSLY ALTER the results of a research study by simply using a statistical analysis that SHOULD NOT have been applied.
So, people........no matter where you stand politically, I encourage you to STAND TOGETEHR AND PUT FORTH YOUR BEST RESEARCHERS AND DATA ANALYSTS IF YOU EVER WANT TO INOW WHAT IS FACT AND WHAT IS FICTION.