The Sinabung volcano on Indonesia's Sumatra Island erupted Saturday spewing ash and smoke 2,000 meters (6,600 feet) above its crater. A worrying statistic which is never mentioned by the mainstream media is Mount Sinabung itself sits just 20 miles north of Lake Toba which is a massive supervolcano and is capable of plunging the Earth into a year without summer.

The Sinabung volcano on Indonesia's Sumatra Island erupted Saturday spewing ash and smoke 2,000 meters (6,600 feet) above its crater. The Center for Volcanology and Geological Hazar Mitigation (PVMBG) warned residents should not have any activity near the volcano, with official Muhammed Nurul Assori de Naman urging those in the Teran, Berastagi, Simpang and Merdeka regions are being warned to wear masks to shield against ash rain. The volcano reactivated for the first time in four centuries in 2010. A total of 23 people were killed in 2014 and 2016 from eruptions. 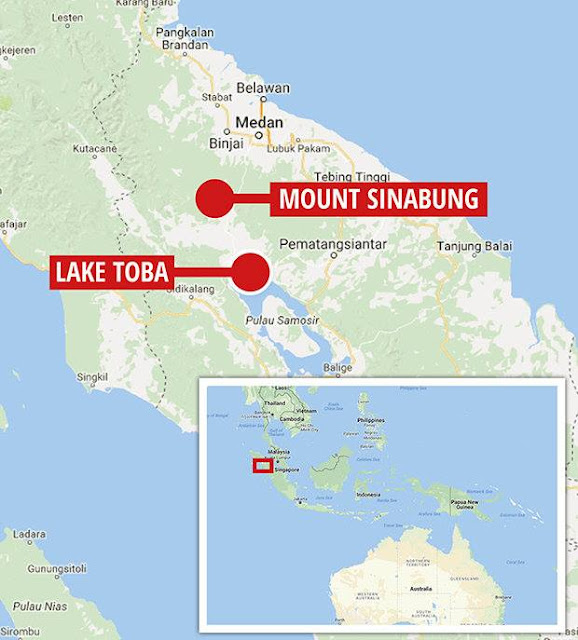 A worrying statistic which is never mentioned by the mainstream media is Mount Sinabung itself sits just 20 miles north of Lake Toba which is a massive supervolcano and is capable of plunging the Earth into a year without summer. Lake Toba is the site of a massive supervolcanic eruption estimated at VEI 8 that occurred 69,000 to 77,000 years ago, representing a climate-changing event. It is the largest-known explosive eruption on Earth in the last 25 million years. According to the Toba catastrophe theory, it had global consequences for human populations; it killed most humans living at that time and is believed to have created a population bottleneck in central east Africa and India, which affects the genetic make-up of the human worldwide population to the present. It has been accepted that the eruption of Toba led to a volcanic winter with a worldwide decrease in temperature between 3 to 5 °C (5.4 to 9.0 °F), and up to 15 °C (27 °F) in higher latitudes. Additional studies in Lake Malawi in East Africa show significant amounts of ash being deposited from the Toba eruptions, even at that great distance.
The year without summerThe year 1816 is known as the Year Without a Summer (also the Poverty Year, the Summer that Never Was, the Year There Was No Summer, and Eighteen Hundred and Froze To Death), because of severe climate abnormalities that caused average global temperatures to decrease by 0.4–0.7 °C (0.7–1.3 °F).This resulted in major food shortages across the Northern Hemisphere.Evidence suggests that the anomaly was predominantly a volcanic winter event caused by the massive 1815 eruption of Mount Tambora in the Dutch East Indies (the largest eruption in at least 1,300 years after the extreme weather events of 535–536), perhaps exacerbated by the 1814 eruption of Mount Mayon which is at this moment very volatile in the Philippines.
Volcano Eruptions 2020
Front Page
at August 10, 2020