Asian and African flooding update: Pakistan 64 dead, Bangladesh nearly 200 dead, India 43 dead, South Korea 26 dead, Ethiopia 30,000 displaced, Somalia 120,000 displaced and 6 dead: I have never witnessed rainfall quite like this in Indo Pakistan and Asia along with parts of Eastern Africa as I have this summer 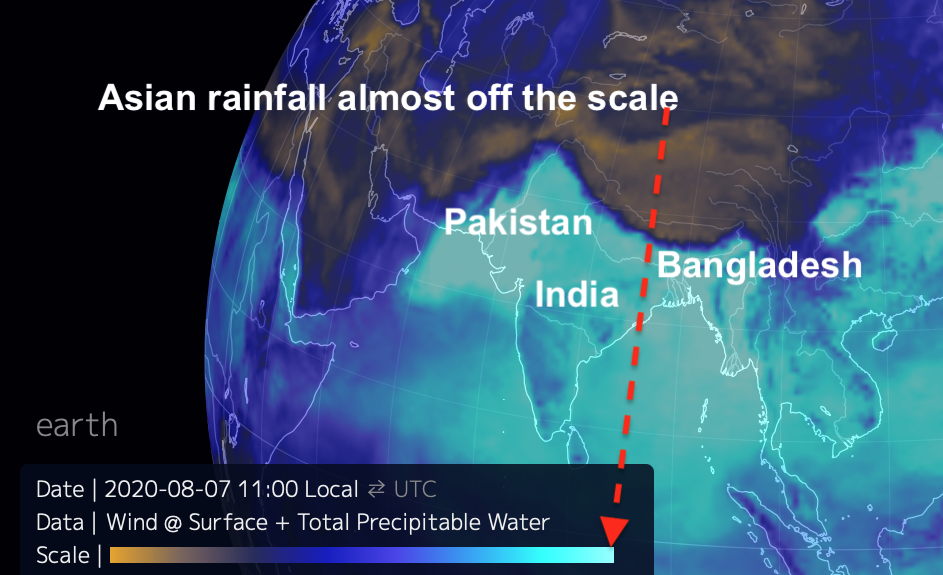 Understandably the world is watching Covid-19, however, what is happening in Asia is unprecedented. I can honestly say I have never witnessed rainfall quite like this in Indo Pakistan and Asia along with parts of Eastern Africa as I have this summer. Incredible amounts of rainfall have affected untold millions in Eastern Africa, the Middle East, Arabia, Indo Pakistan and the Far East in June, July and now into August.

At least 64 people were killed, and dozens of others were injured in heavy monsoon rain-triggered flash floods and different rain-related incidents, during the last three days in different regions of Pakistan, said a report from the National Disaster Management Authority (NDMA) Monday. According to the report released by the NDMA, at least 19 children and nine women are among those who lost their lives in different rain-related incidents in areas ranging from the north to the south of the country.

DHAKA, Bangladesh Bangladesh on Sunday registered 10 more deaths in floods, taking the fatalities count to 184 as the South Asian country faces one of the worst floods in history. Over 33,000 people got infected with a waterborne disease, according to the health emergency operation centre under the Health and Family Welfare Ministry of the country. Of the total deaths, 155 drowned while 16 died of snakebites and 13 in thunderstorms, it said, adding that around 11,375 people in flood-hit areas are also suffering from diarrhoea. Earlier talking to the Anadolu Agency, experts feared that at least 5 million people would suffer from an acute food crisis in floods as nearly half of the country was exposed to floods. aa.com

India 43 dead
KOCHI, India (Reuters) - The death toll from a landslide at a tea plantation in the southern Indian state of Kerala rose to 43 and more than 40 missing on Sunday with nearly two dozen people feared trapped, a senior official said. The landslide, caused by heavy rain, hit the plantation in Idduki district in the early hours of Friday when workers were still sleeping, officials said. The India Meteorological Department has issued alerts for heavy rainfall in several districts, including a red alert for Idduki. In 2018, Kerala was hit by the worst floods in a century. Hundreds were killed, many of them from Idukki.
South Korea 26 dead
SEOUL (Reuters) - At least 26 people have died after 46 days of heavy rains in South Korea, with the country’s longest monsoon in seven years causing more flooding, landslides and evacuations on Saturday.
Nearly 5,000 people had been evacuated as of 4:30 p.m. local time on Saturday (0730 GMT), according to Ministry of the Interior and Safety data, as rains battered the southern part of the Korean peninsula. Ten people are missing.
Niger 9 dead
The UN Office for the Coordination of Humanitarian Affairs (OCHA) reported that widespread floods triggered by heavy rain affected parts of Niger and neighbouring Mali from late June. As of 30 July, 9 people had died, 20,174 people affected and 2,244 houses destroyed. The worst-hit areas were the regions of Maradi and Tahoua, with respectively 13,667 and 4,173 people affected. Flooding has continued, in particular after a period of heavy rain in early August. The capital Niamey recorded 67mm of rain in 24 hours to 07 August. As of 08 August, the Niger river in the city stood at 5.8 metres. Flood List
Ethiopia 30,000 displaced
The UN Office for the Coordination of Humanitarian Affairs (OCHA) reports that more than 30,000 people have been displaced due to floods in Ethiopia since late July 2020 Flooding has affected Afar, Gambella, Oromia, and SNNP regions since 20 July. In the Afar region, the overflow of Awash River and flash floods in the first week of August have displaced almost 20,000 people.
Somalia 120,000 displaced and 6 dead
Further flooding has struck in parts of Somalia, with over 10,000 people affected in South West State over the last few days. Wide areas of the country have seen unusually strong “Hagaa season” rainfall which has caused flash and riverine flooding in particular from mid-July. Since then, 6 fatalities have been reported and at least 120,000 people displaced and 191,000 affected in Hirshabelle, South West, Jubaland States and Banadir region. Flood list
Extreme Weather 2020
Front Page
at August 10, 2020