America Today: When Left meets Right; A spiritual warfare is underway between the American people behind the backdrop of Covid-19; A country built around violence could be about to be destroyed by violence 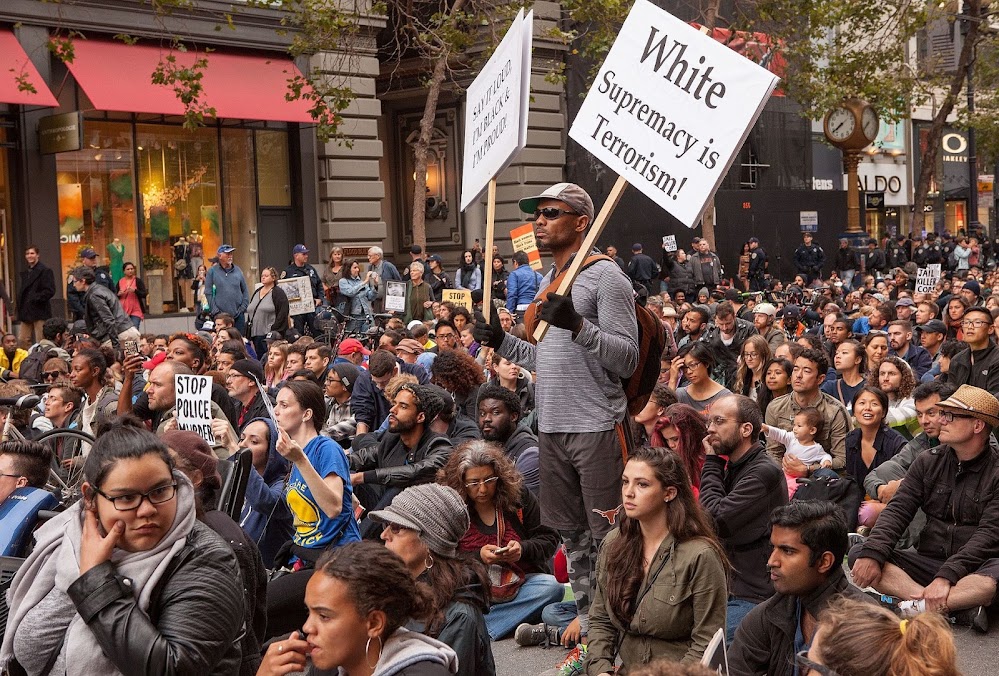 A heavily built man wearing shady shades, a full Mexican-type moustache and beard with an angry frown on his face stares back menacingly at the photographer. The scary man is sporting a patriotic American bandana around his neck and sat proudly on his head is a dirty looking baseball cap showing a faded Confederate flag. His camouflaged trousers and shirt are grade 1 military quality, he has a walkie-talkie and a holstered handgun on his belt, his trousers are tucked into a pair of scuffed Dr Martens boots. He looks mean but perhaps the most sinister item he is carrying is the semi-automatic assault rifle held loosely in his arms. It is incredible for a European to see a US citizen walking the streets with a semi-automatic assault rifle.

An overweight woman stands next to him with a look of pride on her face, her greasy hair is tied back revealing a puffy angry, sweaty face. She is wearing a low cut sleeveless T-shirt which emphasizes her obesity and shows off a little too much of her more than ample chest. She is wearing denim-cut-offs which are a couple of sizes too small and do little to hide her massive butt and heavy legs. In her left hand, she is carrying the Holy Bible and in her right hand is a hand-gun. Behind them, a group of around a hundred similarly dressed people are holding up an assortment of banners. White Lives Matter, God hates queers, keep America great and white supremacy! White supremacy or white supremacism is the racist belief that white people are superior to those of other races and therefore should be dominant over them, white supremacism began in Europe hundreds of years ago but incredibly thrives in the US in 2020.

Confederate flags and the good ole Stars and Stripes, flutter in the wind creating a colourful scene between the banners. All the people in the group appear to be carrying semi-automatic assault rifles, shotguns or handguns, most are wearing cam clothing and nearly all are hiding their faces behind facial hair, shades and bandanas, all of the group are white, mainly male and very macho looking and are called Republicans. Republicans believe individuals should take responsibility for their own circumstances. They also believe the private sector is more effective in helping the poor through charity than the government is through welfare programs and that social assistance programs often cause government dependency. The tension in the air is electric.

Another group, massively outnumbering the military types have amassed and are taunting them. A heavily tattoed man with green hair and a rainbow coloured T-shirt with the words, "Queer as F#$K" across the front is screaming, "fu#@ off Nazi c#n$ts" at the Republicans, this man is Antifa, Antifa is a political protest movement comprising autonomous groups affiliated by their militant opposition to fascism and other forms of extreme right-wing ideology. A black guy with a black bandana over his face and a black Nike basketball cap on his head is also taunting the Republicans. He has a black T-shirt with the letters BLM printed in big white letters on the front and back. Black Lives Matter is a political and social movement originating among African Americans, emphasizing basic human rights and racial equality for Black people and campaigning against various forms of racism, amongst them Police Brutality. The black man is dancing around a burning American flag.

A woman who had cropped her hair like a skinhead and wearing skin-tight jeans rolled up high to expose her boots and sporting a Union Jack T-shirt with the words "Woke Lesbian," in pink letters across the front    threw a rock at the Republicans while screaming," death to the KKK." She was screaming hysterically and looked and sounded as if she was demonically possessed.

This group of people are called "Democrats." Democrats are supposed to emphasize egalitarianism, social equality, protecting the environment, and strengthening the social safety net through liberalism. They support voting rights and minority rights, including LGBT rights, multiculturalism, and religious secularism. However, in 2020, these values have appeared to have been thrown out of the window. Democrats 2020 style is all about anarchy, the rage against the machine. The militant left which has emerged this year is just as dangerous as the far-right in many ways.

The rock, thrown by the Woke Lesbian hit a Republican on the head, this was the straw that broke the camel's back. The two groups became one and all hell was let loose.

Sandwiching the two feuding groups are two other groups and they look much more menacing. They are wearing helmets with face shields. They are dressed in black, each man is wearing a black chest and groin stabvest.  Embezzled across the stabvest in white letters is the name "POLICE." The men in black look like something out of a sci-fi film. They are carrying big sticks which will break heads later. The Police have a utility belt, each carrying a handgun, tye ribs, pepper spray and a tazer. Behind them is another group of black-dressed Police. They are carrying teargas guns to help break up the groups later. Behind them is a fleet of Paddy wagons standing ready, to take away the arrested later. Ironically the American Police use of excessive or unnecessary force by personnel affiliated with law enforcement duties when dealing with suspects and civilians is the very reason the two protesters have come together this day after the police murdered George Floyd earlier in the year sparking the violence which is happening today.

You should say extreme republican and extreme democrat. This does not reflect all republicans or all democrats. Also antifa is promoting the very facism they say they are against. One extreme to the other, at the end of the day it is still extremism.

Why is George Soros not hanging on a noose for funding terrorist organizations like Antifa and BLM? What a Socially Engendered, planned upside down s!!t show. Our Satanic, Pedophile, Globalist, Sociopathic, Puppeteers have planned societal collapse for decades and now they are executing their plans and us. This is the beginning of hard times for all not just the f---ed up Sheeple in the USA. They are using the Plandemic as a smoke and mirrors while they deploy 5G to cook us all! Sad Days indeed. Love yourself, Love Your Family and Friends, Love Your Neighbor, Forgive Your Enemies and grace our Future with Empathy and Courage. Keep your Faith and hold on tight for the Main Event. The planed Collapse of Civilisation is unfolding upon us. Follow your heart.

"It is incredible for a European to see a US citizen walking the streets with a semi-automatic assault rifle."
It's incredible to many of us Americans too. And it makes them look stupid, insecure, fear-ful and mean.

because in America, we still have gun ownership rights, Extremeism is not good but I love the fact that Americans CAN still own and carry one for self defense of themselves and of others.
Gary, Back to commenting on your post. My husband felt the spiritual attack in the air on July 4th. He said I feel something different (and evil). a change in the atmosphere. Not easy to describe but it is here and definitely here. I saw where the churches in Africa have unified towards a one world religion and the leader of those churches uses a magic wand to do magic spells during services.
Gutierres of the UN announced to New Global Government is about to take over. all the signs are converging at such a rapid pace since the Revelation 12 sign happened Sept, 23, 2017

Thank you, Jo, stay safe. I hope you are both feeling better. Eph 2:2, wherein in times past ye walked according to the course of this world, according to the prince of the power of the air, the spirit that now worketh in the children of disobedience.