The silly season arrives and 2020 is about to ramp up! A very dangerous record-breaking "long heatwave" set to shred nerves in Western US, as rolling blackouts plunge two million Californians into darkness already and will no doubt fester into more anarchy and hate over the weekend 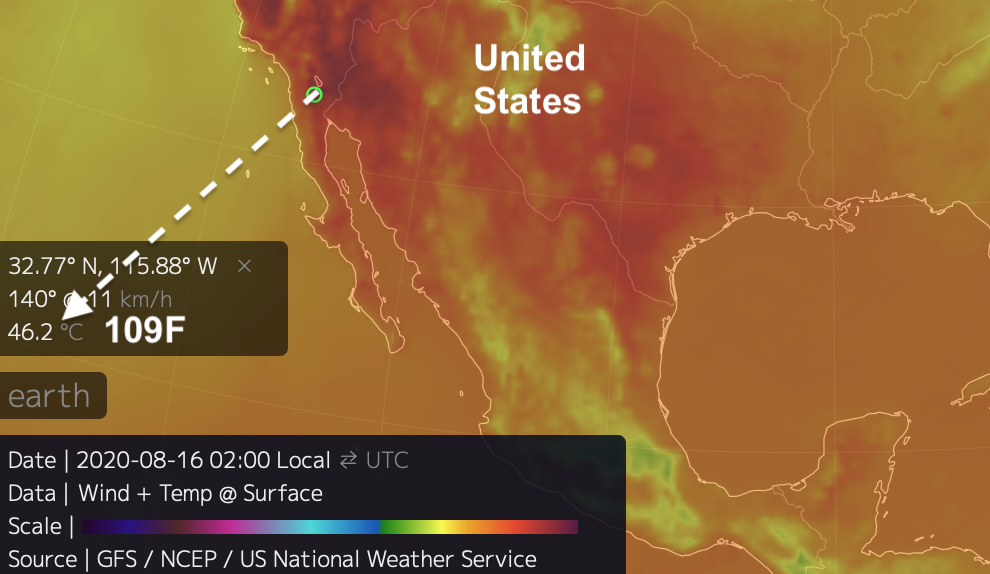 And now the height of summer has arrived (the silly season) for the poor folks of the Northern Hemisphere and the fun is about to start. We have already had a taste of what global warming/climate change can do to a country way back in January and February. Remember the Aussie fires? 3 billion animals dead or wounded, 25% of Australia's temperate forests destroyed and 60% of crops in the worst fires ever seen anywhere on a populated country.
If you are wondering how the weather is panning out so far in summer of 2020, well, July 2020 has tied for second-hottest July on record for the globe, according to NOAA’s National Centers for Environmental Information. What’s more, the Northern Hemisphere saw its hottest July ever — surpassing its previous record high set in 2019. 2020 is on course to be the hottest year ever recorded.

As the silly season gets underway, a very dangerous, long-lasting heatwave is about to unfold over the western United States with temperatures expected to soar as much as 30 degrees Fahrenheit above normal from Arizona through Washington. Temperatures approaching 50 deg C (122F) have already been recorded in the Phoenix area, the city also broke the record for most days with a temperature at or above 115, beating the old record of 7 consecutive days. A long-duration, dangerous heat event is setting up for parts of the West that will begin Friday and last into next week. More than 34 million people are under excessive heat watches and warnings across California and the Southwest. Most of the heat alerts go into effect on Friday and will stay in effect through early next week. During this time, dozens of record highs could be set in the coming days for cities like Las Vegas, Phoenix, Tucson and Salt Lake City,  according to AccuWeather.

A report by Bloomberg yesterday claimed as many as two million Californians were plunged into darkness over the course of four hours late Friday in the first rolling blackouts to hit the state since the 2001 energy crisis. And that was only Day One. The relentless heatwave is expected to blanket California through the middle of next week, sending temperatures soaring past 110 degrees Fahrenheit (43 degrees Celsius) in some parts. People blasting their air conditioners and fans to keep cool are straining the region’s power system and raising the spectre of a repeat of Friday’s sudden and largely unannounced outages. All this will no doubt fester into more anarchy and hate over the weekend.
Parts of Europe have just endured 10 days in a row when temperatures have hit the mid-to-high 30sC (105+F). However, the humidity caused the actual temperature to feel more like 50 deg C, 122F and has been mostly unbearable. Last night, for instance, the temperature at bedtime in my kneck of the woods was still above 30 deg C (86+F) rendering sleep impossible. The last 10 days is the longest tropical heatwave ever in some parts of Western Europe and is the 2nd heatwave we have endured this summer.
But all the above pales into significance when you consider what the weather has been doing in Africa, Asia and Indo Pakistan recently, in my 12 years reporting weather events I can honestly say I have never seen rainfall of this magnitude before which has been drenching the massive area since the beginning of June. Incredible amounts of rainfall have affected untold millions in Eastern Africa, the Middle East, Arabia, Indo Pakistan and the Far East in June, July and now into August and left hundreds dead and most of these countries have been affected by the unprecedented locust plagues.
The virus never went away!

The Coronavirus has not gone away this summer as we were assured it probably would. For the US, Brazil, India and many other countries, it just keeps on keeping on. In most of Europe, the virus did go away, well, almost but is now back, "the dreaded second wave," has arrived and could possibly make the first wave look like a walk in the park.

More than 250,000 new cases a day are infecting people around the globe with a million new cases every four days, a total of more than 21 million people have been infected globally since the virus was announced just 219 days ago. A very conservative 764,741 have officially died worldwide from the virus but the true figure will no doubt never be known.

Not surprisingly the virus has brought the worst out of people with riots from frustrated citizens around the US. BLM, Antifa, white supremacists and many other groups have continued to cause anarchy, hate and even murder in the US as the media and politicians continue to inform of the "peaceful protests," continuing.

However, we have seen the rise of the "pissed off citizen" escalating around the world. Riots have taken place in many countries around the world during the very strange first 8 months of 2020. Riots in Europe from the BLM movement. Riots in Hong Kong against the totalitarian regime understandably, riots in Beirut after the devastating explosion. Also, protests, where you might not expect, for instance, brave citizens in Russia, have been protesting against Putin and the Iranian people have been seen protesting against their despot leader, Ali Khamenei, even Benjamin Netanyahu has been targeted.

However, the most powerful message has come from the Belarus Military.

Belarus 'uniform shame' becomes a viral protest
A new social media trend has taken off in Belarus: Men have been destroying their military or police uniforms. In clips, they say they are ashamed to be linked to the security forces cracking down hard on protesters. One, Anatoli Novitski, told BBC Russian he was astonished by the police violence. For days there have been mass protests against the re-election of Belarus President Alexander Lukashenko, see the clip below.
Extreme Weather 2020
Front Page

That is a good powerful sign in Belarus yes, also there was another good powerful sign in our world this past week. Happened in Germany with tens of thousands of peaceful protesters burning their face bra's and saying NO more masks, mandates or social distancing we have had enough of it all! The germans call the masks muzzles, they are right because they remember what happened last time they followed orders!

If only msm news would cover that 24/7 good news instead of the propaganda negative slavery mandate fear factor news coverage it plays instead! The world might actually recover with more good news vs bad news. Ya think??

Well it seems the earth is now one hot temperature over all ......but there is no global warming right?! Lol....
Its 100+ everywhere including the arctic poles. FL, USA where I am Gary is only 2F degrees (88) higher then your area has been. Our night time lows averaging around 88F. Daytime it is 106, 108 heat index aka "feels like", with said temps at 92 - 95 by the media until I get home at end of the day and see my thermometer under the carport in the shade reads 98 - 100. The tall stick like candles I have on my lanai were melted all curved and bent over from the candle holders they were in! Our actual temps are always 5 - 8 degrees F higher then media says it is. So the feels like is the actual temp in the shade as far as I can see. Its steaming hot yes!

All that extreme global heating is such a wake up call and the muzzled sheeple have absolutely no clue how close they are to living out their symbolic requests of "cut off my oxygen" face masks.
Wearing a mask says: you are sick.....you have no voice....you dont want to breath 100% oxygen.....you are brainwashed.....and you have no identity. You get what you ask for, are they all stuck on stupid or what!?

It's all connected are you noticing yet?

I noticed this recent heatwave didn't really cool down in the evening, the temp stayed above 30 deg C (86+F), without airco and the humidity at around 85% which is normal here, sleep was almost impossible. Even with all the windows open, the temperature didn't drop, now that is weird not to mention energy-sucking. I couldn't imagine wearing a mask in these temps.

Another observation I have made during recent years is the fact that trees are losing foliage three months earlier. Trees who usualy shed their leaves in late October, early November are now beginning to lose foliage from early August. When I was a kid, back in the 60s dad would take me into the countryside in late October to collect conkers from Horse Chestnut trees. I remember back then, white frost would be covering the fields and I was always well wrapped up in an overcoat and scarf. These days the conkers drop in early August and frost is never seen in October anymore. In many ways, October has now become a pleasant summer month in place of the beginning of the winter.