The Plagues Of Iran 2020 Update: Under attack? Another fire at a power station in Southwestern Iran on Saturday is the latest of several recent fires and explosions which have hit sensitive sites in the Islamic country 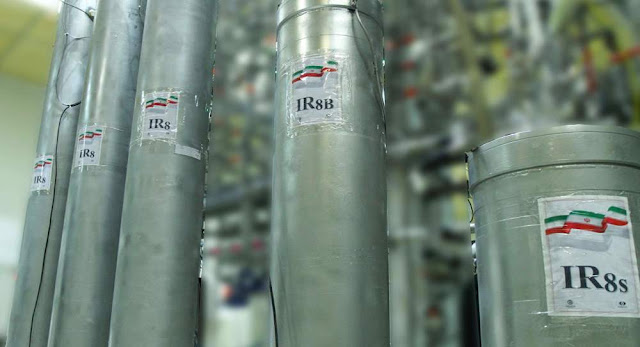 A chlorine gas leak at a petrochemical center in southeast Iran sickened 70 workers, state-run IRNA news agency reported Saturday. Most of the workers at the Karun petrochemical centre in the city of Mahshahr in southeast Khuzestan province were released after undergoing medical treatment. Meanwhile, in the city of Ahvaz, also in Khuzestan, a fire at the Zergan power plant was ignited when a transformer exploded. The blaze was contained by firefighters after two hours of battling the blaze. Mohammad Hafezi, the power plant's health and safety manager, told IRNA the cause of the fire was under investigation. The two incidents in Iran's oil-rich Khuzestan come after a fire and explosion at a centrifuge production plant above Iran's underground Natanz nuclear enrichment facility early Thursday. Officials said the cause of the fire at Natanz is known to officials, but won't be immediately released for "security reasons." On Tuesday, an explosion from a gas leak in a medical clinic in northern Tehran killed 19 people.

Sabotage or bad luck? Iran is suffering a chain of catastrophes. Earlier this week three mysterious explosions at the Iranian Natanz nuclear facility in Iran has led to many questions. A former official suggested the incident could have been an attempt to sabotage work at the plant, which has been involved in activities that breach an international nuclear deal.

Last Friday Israeli F-35 stealth fighter jets bombed a site located in the area of Parchin, which is believed to house a missile production complex — an area of particular concern for the Jewish state, in light of the large number and increasing sophistication of missiles and rockets in the arsenals of Iranian proxies, notably Lebanon’s Hezbollah. Fighter jets from the IAF’s second F-35 squadron, the Lions of the South, fly over southern Israel (IDF spokesperson) Neither of these claims was confirmed by Israeli officials, who have been mum on the reports. TBW

The reported Israeli strikes followed an alleged Iranian attempt to hack into Israel’s water infrastructure in April, an effort that was thwarted by Israeli cyber defences, but if successful could have introduced dangerous levels of chlorine into the Israeli water supply and otherwise seriously interrupted the flow of water throughout the country according to the Times of Israel.

Security sources have said that Iran would retaliate if it becomes clear that Israel, or the United States, have been behind any attempt targeting Iran’s nuclear sites. A Saturday article by Nour News said media reports crediting Israel for an alleged cyber attack targeting Iran’s Natanz nuclear facility mean that the regime itself would be posed to similar threats. The article, which had no byline, said the international community should be more concerned about cyber sabotage attempts targeting Iran’s nuclear facilities as they could lead to nuclear leaks with environmental ramifications of unknown magnitude. It added, however, that despite Israel’s policy of keeping silent on sabotage acts targeting Iran’s nuclear sites, such moves are ultimately attributed to the regime given its long records of hostility towards Iran and its peaceful nuclear activities. The article by Nour News said Israel should await serious consequences if it crosses Iran’s "red lines." PressTV

“Cheetahs of the Homeland”

In a further twist, an online video and messages purportedly claiming responsibility for the fire that analysts say damaged the centrifuge assembly plant at Iran’s underground Natanz nuclear site deepened the mystery Friday around the incident — even as Tehran insisted it knew the cause but would not make it public due to “security reasons.” The multiple, different claims by a self-described group called the “Cheetahs of the Homeland” included language used by several exiled Iranian opposition organizations.

Torrential rains, through February, March and April have caused chaos to many towns villages and farms, displacing hundreds. The rains are helping the swarms of locusts who are devasting crops in the southwest (southern Khuzestan, Busherh, southern Fars, western Hormozgan provinces). Local breeding continues in the southeast where hoppers are forming groups and bands in eastern Hormozgan. TBW
Record bustin' locust plague

Earlier in February, a record-breaking six-meter (20 feet) of snow caused chaos to roads in some areas. TBW
Covid-19

To make matters worse Iran has struggled to contain the coronavirus. Iranian leaders do not believe in forcing their people into a lockdown situation, they believe a lockdown is old fashioned and they do not ask people with symptoms to self-quarantine. So people who do not show symptoms are mingling with healthy people and no doubt passing the virus on. The Iranian leadership is well known for its ability to tell lies, so its official figure of 11,000 deaths from 235,000 cases is treated by widespread speculation in the West.
Boogaloo 2020
Home Page